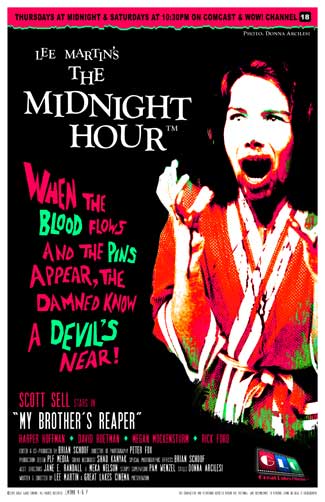 The February, 2012 episode of “Lee Martin’s The Midnight Hour” pays homage to the month of romance with an entry showcasing the slimy underbelly of love. In “My Brother’s Reaper,” Cupid’s arrow is tainted with black magic as a young man’s (Scott Sell) lovers die grisly, supernatural deaths just minutes after he leaves them. (Click here to view trailer.)

While the kiss of death turns Mark’s little black book into a graveyard Who’s Who, there is an even darker shadow cast over his home life: Lying in a dark room in the top floor of the old homestead is Edwin, his insect-eating brother, who idles away the long hours in bed by moving heavy furniture and locking doors telekinetically…a fact Mark vainly attempts to convince his father (David Roetman) of.

This episode is a particularly atmospheric entry in the series, with many scenes filmed at night in a stately but spooky old home well suited to the creepy story. Long shadows and deep hues set a surreal stage for the sometimes graphic gore on display—perfect for late night viewing with that special (or not so special, as the case may be) someone.

Leading man Sell turns in a convincing, thoughtful performance as troubled stud Mark and in scene after scene, he steals the show. One can imagine him being “discovered” through his appearance on the series. Sharing the spotlight with him are some startling CGI effects courtesy Brian Schoof, who also contributed the film editing. Director of photography Peter Fox does a great job setting a mood that connotes dread and Mark’s girlfriends (Harper Hoffman, Megan Mockensturm) are both appealing. Some of the death scenes are genuinely stomach-wrenching, so watch what you eat during the “vomiting pins” segment. 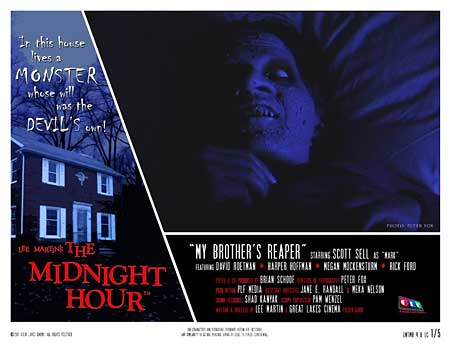 All in all, a good bet for macabre-minded lovers of all ages on a winter’s night. 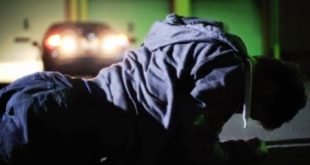