With the holidays nearly over, TV addicts with a penchant for the macabre will be happy to get another fix of murder and mystery in the sixty-fifth episode of “Lee Martin’s The Midnight Hour,” a stylish color-noir entry aptly entitled, “The Last Confession.”

After his hooker girlfriend is killed, a sleazy widower sends his adopted sons to boarding school and is later presumed dead in a conflagration.  Seven years later, his now grown boys return to the old homestead, only to find a few unpleasant surprises await them—not the least of which is, someone seems to be killing them off one by one.

There are plenty of suspects and unexpected turns throughout, making this episode a good bet for second or even three-time viewing.  Highlights include stylish cinematography, moody lighting and rich color grading.  Also on board are series regulars Kevin Hartzman, Tanner Gould and Ian Myers. 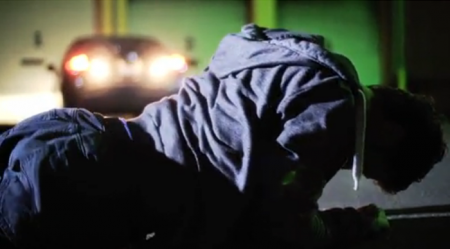 “The Last Confession” premieres at midnight (ET) Thursday, January 2 and repeats every Thursday and Saturday night throughout January, 2014.  For channels, times and a live streaming video simulcast link, visit the www.leemartinsthemidnighthour.com.

Halloween in November? It happens on all-new “Midnight Hour”

“Midnight Hour” sets off its own fireworks in July