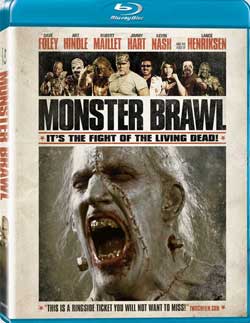 Eight classic monsters fight to the death in an explosive wrestling tournament set inside an abandoned and cursed graveyard.

It was only a matter of time before some of film’s greatest monsters squared off against each other in a fight-to-the-death match. When I first caught word of the “Monster Brawl” production, honestly, I was sold just on concept alone. In fact, being a fan of the “Freddy vs. Jason” AND “Aliens Vs Predators” films, I found the idea of having a bunch of movie monsters beat each other to a pulp sounding like a win-win engagement. Ultimately, in addition to the film itself, “Monster Brawl” was gonna have to step up its game in the makeup department. I can tell ya, that it surely doesn’t disappoint.

Usually when you hear of such a film being produced there is always this worry that it’s going to be used “entirely” for humor without the edginess that horror fans hunger for. Not in this case. It does have its campiness in presentation, which uses the trademarks of Wrestling-style announcements to its flavor, but rest assured there is also some knock down, gory inventive stand off confrontations lined up in roll out. 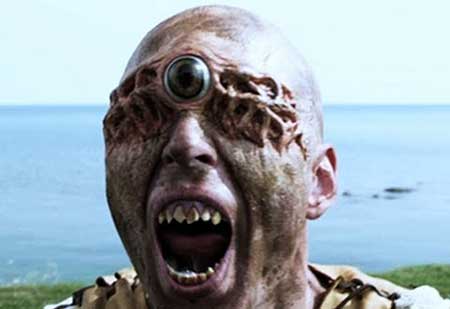 “Monster Brawl” is designed so that there are 4 initial matches. The matches are comprised “creatures” vs creatures” and “the undead” vs “the undead”. The finalists of the matches will battle a final 5th match to determine the ultimate winner for all. (Note: to save time, the film condenses this aspect down from 7 matches to 5 matches.) 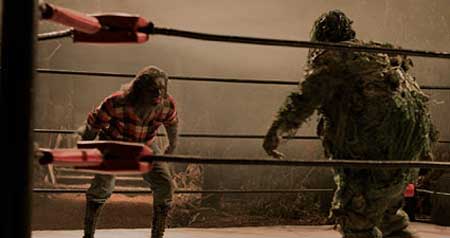 The “undead” monsters are represented by Zombie Man, Mummy, Swamp gut and Lady Vampire. On the “creatures” end we have Cyclops, Frankenstein, Witch Bitch, and Werewolf. You can look forward to matches like Frankenstein vs the Zombie Man and The Mummy vs. Lady Vampire as a sample of the 5 matches. The bought takes place at an abandoned cursed graveyard which despite atmosphere is forewarned as being a bad idea. Thru the event we are hosted by announcer Buzz Chambers (Dave Foley) and former champ Sasquatch Sid (Art Hindle). Narration in the film is performed by genre favorite Lance Henriksen. 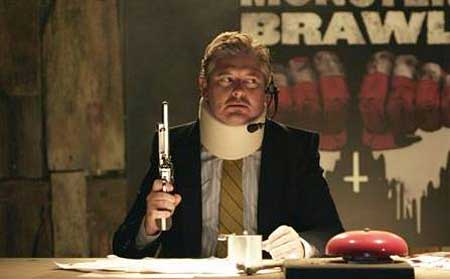 Early on, we are told that the event has been highly supported due to ridding the world of a few monsters. We also find that many of the monsters are drawn to the event almost on a supernatural level alone. Others are invited and tempted to the event making the turnout a pretty full event. This sensationalistic aspect is projected aggressively while still keeping the monsters vicious, mean, and determined.
Each monster gets a quick historical segue before being announced into event. The segments are like mini-short films that show each in their current settings at various locales. The shorts are nice inclusions helping to break up the matches with more defined looks into the characters individually. Title cards are introduced with monster stats in 2 at a time pair offs.

From here, we essentially roll with the matches and a healthy amount of beat downs from one monster into the next. A few monster related mishaps occur which changes the direction a bit, however most will probably have all eyes on the sexy hotties accompanied by Jimmy Hart who root for their monster choice in each event.

What I really liked about the film is that its different (different from the claymation style of MTV favorite “Celebrity DeathMatch). It does use a comedic angle but also makes sure not to make wimps out of the challengers. The finale sets things up for a sequel of which we can anticipate more monster battles down the road. I know there were a few on my list I’d like to see, though you also have to assume that the monsters will stay within the classic movie monster choices rather than bringing in trademarked modern iconic villains of the last decades. 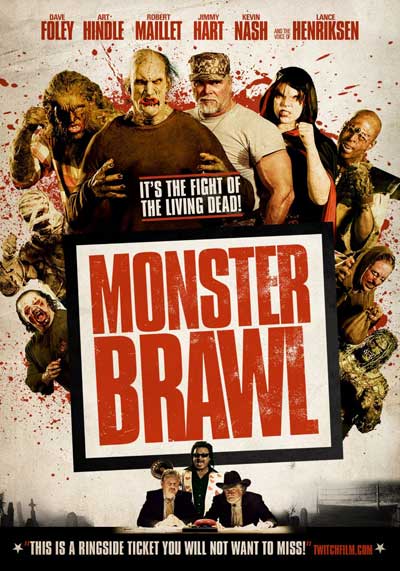 The movie was filmed at Collingwood, Ontario, directed/written by Jesse T. Cook and produced by Foresight Features.

A great time with this one full of bone crunching standoffs and dark opponents making this one of first to really put these iconic cinema creatures in an actual wrestling ring. Movie watchers and horror fans will delight in a fresh entry ready for fans of the classics to enjoy.

Monster Brawl is now available on Bluray per Image Entertainment