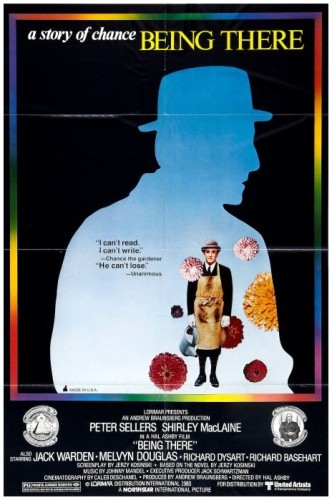 “A simple-minded gardener named Chance has spent all his life in the Washington DC house of an old man. When the man dies, Chance is put out on the street with no knowledge of the world except what he has learned from television. After a run in with a limousine, he ends up a guest of a woman, Eve, and her husband Ben, an influential but sickly businessman. Now called Chauncey Gardner, Chance becomes friend and confidante to Ben, and an unlikely political insider.”

Comedy actor Peter Sellers rose to fame on the BBC Radio comedy series The Goon Show. His talent to portray a range of characters and accents contributed to his success in films and earned him many awards on both sides of the Atlantic. Many of his characters became ingrained in public perception of his work. Unfortunately, his private life was plagued by turmoil and crises, including emotional problems and substance abuse, married four times with three children. Despite his personal chaos, he is probably best remembered as Inspector Clouseau in The Pink Panther (1963) films, Clare Quilty in Lolita (1962), and three separate characters in both The Mouse That Roared (1959) and Doctor Strangelove (1964).

In the late seventies, two of the most intriguing projects of his entire career were in the offing. The first, a science fiction film called The Alien (nothing to do with the 1979 blockbuster) to be directed by the most celebrated of Indian filmmakers, Satyajit Ray. The other was Being There based on the short novel by Jerzy Kosinski. His plan to work with Satyajit Ray having fallen through, Sellers put all his energy into setting up the movie of Being There (1979). He had been captivated by Kosinski’s brilliant fable of a nonentity who rises to the White House like a bubble – transparent and about to burst – and had an unshakable conviction that only one actor could do justice to the serenely passionless Chance The Gardener: Himself. Chance, he felt, might well be his last chance, so he set about convincing Kosinski and director Hal Ashby that he was the man for the job.

During his sixteen year career as director, Hal Ashby made several acclaimed and popular films, including the Warren Beatty vehicle Shampoo (1975) and the cult romantic comedy Harold And Maude (1971). Bound For Glory (1976), starring David Carradine as Woody Guthrie, was the very first film to use Steadicams. Ashby’s most commercially successful film was the Vietnam Vet film Coming Home (1978) starring Jane Fonda and Jon Voight, both of whom won Oscars for their performances. Apparently, Voight had been rather uncooperative during the production, and it was Ashby’s skillful editing which earned him his only nomination for Best Director.

The unique challenge posed by the role of Chance The Gardener (whose name is misheard as Chauncey Gardner) was that of impersonating someone who simply wasn’t there. In Kosinski’s novel, the character is never fleshed out by verbal descriptions of age or physique, no past, no identity, no accent. Totally illiterate and ignorant of the ways of the world, he has lived most of his life contentedly tending the garden of his mysterious benefactor, known simply as ‘The Old Man’. His only window to the outside is the ubiquitous television, which only multiplies his ignorance. In the words of the black maid Louise, Chance has been “Shortchanged by the Lord” both mentally and physically. Sellers, resolved to recover the glittering sharp-edged precision of his earlier work after so much coarse clowning, was denied the very foundation of the actor’s art: There was virtually no character to begin with, no information for an actor to develop into a living, breathing individual.

It wouldn’t be an exaggeration to say that his fourth marriage almost floundered during his desperate search for some characteristics that he could attach to this man without a character. While filming in North Carolina he become unapproachable and had so completely withdrawn into the cocoon of his character that it began to frighten his wife and friends. As soon as he had discovered a voice – a softly understated version of Stan Laurel’s American-inflected North Country accent – the rest clicked infallibly into place: The staid overcoat and Homburg hat, the dated but well-cut suits slightly too short in the trouser-leg, and especially the hypnotically placid expression from which every trace of emotion had been rigorously expunged. Without question, the performance is one of the greatest of his career, and garnered him the American National Board Of Review award for Best Actor of the year and his second Oscar nomination. After years of typecasting, he demonstrated his genius was still intact and could be tapped if both director and role were strong enough. Sellers also demonstrated that, although he was incapable of playing himself in The Mouse That Roared and There’s A Girl In My Soup (1970), he had the power to give flesh to ‘no-one’.

In this he was much aided by director Ashby and writer Kosinski, whose adaptation of his 150-page novel actually improves on the original. Although the film version fails to make the romantic interludes between Chance and Eve (Shirley Maclaine) convincing, it works perfectly when charting Chance’s leisurely but irresistible ascension to the Presidency. Much of the movie’s sly and subtle humour is derived from the spectator’s uncertainty as to whether what they see and hear is actually intended to be funny. The joke is often on us, and familiar devices of deadpan comedy – the double-take and the slow burn – is more often seen on the faces of the audience.

Wonderfully off-centre gags abound: Accustomed to having his meals served by Louise, Chance approaches a black housewife in the street plaintively enquiring about his lunch, or watching his own appearance on a television talk show and immediately switching channels, as has always been his habit. Standing in a crowded elevator, Chance pensively remarks, “This is a very small room.” He greets the President Of The United States (Jack Warden) with the unanswerable comment, “You look much smaller on television.” When Eve asks if he is related to Basil and Perdita Gardner, he solemnly answers, “No Eve, I’m not related to Basil and Perdita.”

In view of the character’s inability to do little more than repeat – either his own few words or words which have been addressed to him – Sellers may have been allotted the smallest vocabulary of any major speaking role in the history of sound film. Before you have time to ponder that rather dubious statement, I’ll bid you a very good night and look forward to your company next week when I have the opportunity to simultaneously raise both hackles and cackles with more dreadful dross from the drains of Los Angeles in another trouser-moistening fear-filled film review for…Horror News! Toodles! 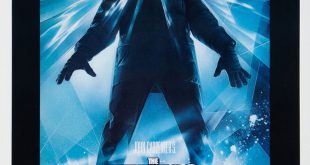 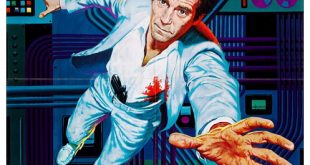