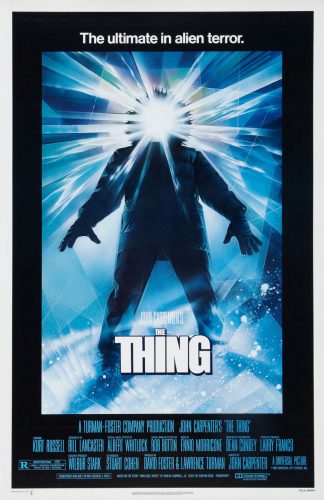 In Antarctica, twelve men working at Outpost 31, a research center, get more than they bargain for when a dog is welcomed into the compound and unwittingly lets loose a mysterious and invisible alien that imitates other living beings perfectly.

The summer of 1982 was an extraordinary time for movies, arguably the best summer of all-time in terms of the quality of the films released during the designated months of May through August.  It was the last time that I recall a vast number of titles of such highly artistic merit being released literally one after another.  Conan the Barbarian was a film that I looked forward to since I had read the novel.  When I saw it, Basil Poledouris’s score became an immediate favorite.  My grandmother took me to see Annie (I know, shut up…) as she loved the play, and I must admit that the musical score was infectious.  Rocky III was championed by the most beautiful girl in my seventh grade class, so naturally I had to see it.  Poltergeist and Star Trek II: The Wrath of Khan opened on the same day (if you saw Star Trek II in theatres that year, you’ll remember that it was titled Star Trek: The Wrath of Khan onscreen – a decidedly deliberate maneuver to distance itself from the memory of the Robert Wise film from 1979?). 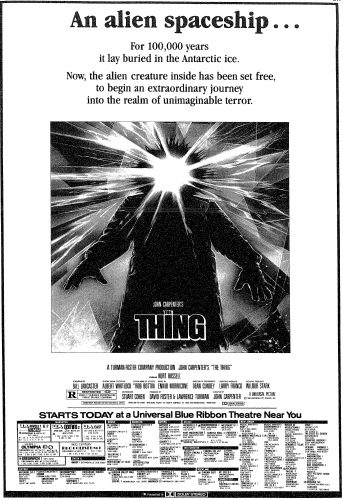 The rest of the summer gave us E.T. The Extra-Terrestrial, Firefox, Tron, The Challenge, An Officer and a Gentleman, Night Shift, The Last American Virgin, Pink Floyd: The Wall, Fast Times at Ridgemont High, The Beastmaster, and The Road Warrior which, to this day, is the best action film I have ever seen.  Audiences fell in love with Steven Spielberg’s titular alien whose genesis was born when the director was shooting Raiders of the Lost Ark in 1980 and wondered what would happen if one of the aliens in his own Close Encounters of the Third Kind would have felt if it had been left behind had the mothership left earth prematurely.  Whereas the aliens in Mr. Spielberg’s films were warm and friendly, such was not the case in John Carpenter’s The Thing, a film that was so universally reviled that it is more famous today for its poor critical reception than for being the last truly great movie that Mr. Carpenter has directed.  Some even feel that it’s his best film, and they could well be right, which isn’t bad considering all he wanted to do was make westerns! 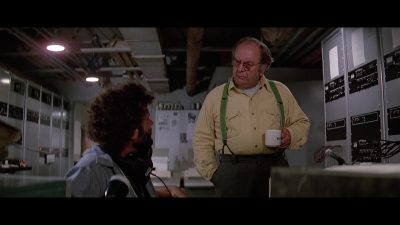 The Thing was released on Friday, June 25, 1982, the same day that another widely panned film, Ridley Scott’s Blade Runner, made its way on to American screens.  In retrospect it is easy to understand why both films were not well-received.  Neither one was exactly positive in tone, and people were turned off by the former’s (now revered) gross-out effects by Rob Bottin and Harrison Ford’s stilted voiceover narration in the latter.  Today, both of these films are widely regarded as two of the best films ever made in their respective genres.  I find it interesting how that happens!  Hindsight is 20/20, and this is another excellent look at the film. 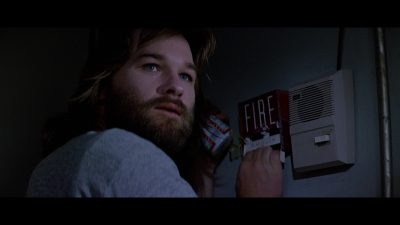 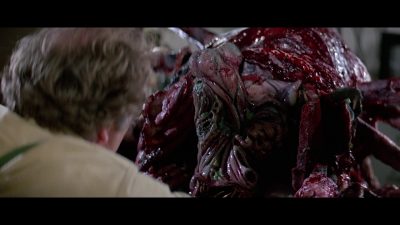 In the 1982 film, twelve men who work at U.S. Outpost #31, an Antarctic research center, come into contact with a crazed man of Norwegian descent firing upon what appears to be a helpless dog.  Unfortunately, one of the members of the research center, Clark (Richard Masur), loves dogs and the Norwegian is shot dead before he can kill the Alaskan Malamute, or anyone else for that matter.  It soon becomes clear, however, that there is something sinister about this dog which has now taken up residence in the compound.  Something nefarious is going on.  A mysterious invisible force of some kind is wreaking havoc among the men who consist of MacReady (Kurt Russell), Dr. Blair (Wilford Brimley), Nauls (T.K. Carter), Palmer (David Clennon), Childs (Keith David), Norris (Charles Hallahan), Bennings (Peter Maloney), Garry (Donald Moffat), Fuchs (Joel Polis), and Windows (Thomas Waites), moving from one body to another and emulating their exact likeness. 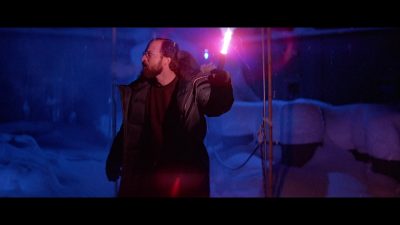 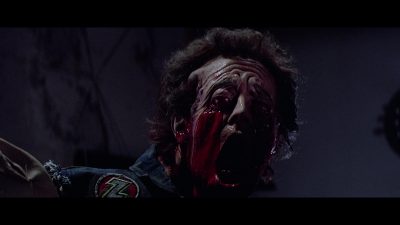 Despite the fact that I saw the trailer for The Thing in 1982 and even bought the soundtrack LP on MCA Records at the time, I didn’t see the film until July 1983 when The Movie Channel showed it late one night.  I was not impressed with it at all.  It felt like a very boring version of Ridley Scott’s Alien, the Ten Little Indians plot, this time in the snow rather than outer space.  Nine years later I saw it letterboxed on laserdisc with the audio pumped through a stereo and my reaction to it was the complete opposite.  I was blown away.  Laserdisc was an analog technology that afforded one the opportunity to fast forward and rewind in a fashion that digital technologies, by their very nature, cannot support.  I recall fondly my friend Jeff and I rewinding the scene wherein Donald Moffat says, “I know you gentlemen have been through a lot, but when you find the time, I’d rather not spend the rest of this winter TIED TO THIS F@#$ING COUCH!”  We would rerun it so that he would say, “TIED TO THIS F@#$ING COUCH!  TIED  TIED  TIED TO THIS TO THIS F@#$ING COUCH!  F@#$ING COUCH!  F@#$ING COUCH!”  It was quite humorous at the time!

Director Carpenter was unfairly treated by Universal Pictures following the film’s poor critical and box office reception.  He was in the midst of prepping the film version of Stephen King’s Christine for Columbia Pictures and was also readying his adaptation of Firestarter with screenwriter Bill Lancaster when that project was taken away from him.  This was a blessing in disguise as Mr. Lancaster reportedly completely jettisoned the John Rainbird character!

One criticism that has been launched against The Thing is the lack of women in the film.  The only female per se is the female voice of the computer chess game that Kurt Russell plays and refers to as “You cheatin’ bitch”, voiced by Mr. Carpenter’s then-wife Adrienne Barbeau.  This link has a very interesting article on the lack of women in The Thing, and I suppose that revisionism in film theory could make a case (albeit a sexist and short-sighted one nonetheless) that The Thing is about the emasculation of men (the group at Outpost 31) with the introduction of The Female (in this case, The Thing) into their lives.  This was Mr. Russell’s third outing with Mr. Carpenter after Elvis (1979) and Escape From New York (1981) before going on the appear in Big Trouble in Little China (1986) and Escape From L.A. (1996)

I’ve owned The Thing on VHS, laserdisc, and the first DVD pressing.  I sincerely hope that this is the last time that I have to get this film (Taxi Driver is coming out again on Blu-ray for its 40th anniversary.  Almost time to declare bankruptcy!)  Below is a listing of all the extras provided for The Thing followed by my comments about some of the individual extras:

NEW 2K Scan of the Interpositive Supervised and Approved By Director of Photography Dean Cundey.  I was really hoping for a 4K scan of the original camera negative, but what we have here is beautiful, so no complaints.

NEW Audio Commentary with Director of Photography Dean Cundey as moderated by Rob Galluzzo.  This is a welcome addition to this set as I love hearing behind-the-scenes folks discuss what went into the making of a film.

NEW Audio Commentary with Co-producer Stuart Cohen as moderated by Michael Felsher of Red Shirt Pictures.  This is an absolutely riveting and fascinating in-depth commentary with a very engaging and highly experienced producer who has vivid memories of what he went through getting The Thing done.  I wish that more people in this capacity would do audio commentaries as they are a great source of behind-the-scenes information.  Mr. Cohen mentions the one television interview that John Carpenter gave in promotion of The Thing, and it was on Late Night with David Letterman two weeks prior to the film’s opening.  You can watch it here on Youtube.  Mr. Carpenter comes out at 34:17.

Audio Commentary by Director John Carpenter and Actor Kurt Russell.  This is ported over from the previous editions of the film and is a highly enjoyable affair.  Kurt Russell has always been one of my favorite actors, ever since I saw The Strongest Man in the World on The Wonderful World of Disney.

One item that does not appear to be ported over is the isolated score by Ennio Morricone, so hold on to your DVDs for this extra.

NEW Requiem For A Shape Shifter – An Interview With Director John Carpenter In Conversation With Filmmaker Mick Garris (28 minutes).

NEW Back Into The Cold: A Return To The Shooting Locations Of THE THING – An Animated Photo Gallery Narrated By Todd Cameron Of Outpost31.com

John Carpenter’s The Thing: Terror Takes Shape – A Documentary On The Making Of THE THING Featuring Interviews With John Carpenter, Kurt Russell, Special Effects Make-up Designer Rob Bottin, Legendary Matte Artist Albert Whitlock Plus Members Of The Cast And Crew (80 minutes – SD).  This is another feature that has been ported over from the original DVD release in 1998, a great documentary on the film.

Network TV Broadcast Version Of THE THING (92 minutes – SD) – This is an interesting find as I never recall hearing about this film airing on network television.  I mean seriously, why would you?  I would love to see the network airings of Blue Velvet (1986) and Goodfellas (1990), however!  The film got no love in this incarnation either, with the New York Times TV listing on October 11, 1987 remarking, “Gorier this time.  More effective before, with power of suggestion.”  This is a very poor looking transfer of the film, framed at 1.33:1 and looks like it was transferred from a VHS dupe from the television airing. The audio is muffled and in monaural as well. It’s actually quite humorous to watch as an unexpected and omniscient narrator, out of nowhere, begins explaining to the audience the names and professions of each of the individual characters! This was no doubt in response to audiences’ complaints in 1982 that they couldn’t keep track of who the characters were, nor did they care about them.  Worth watching for diehard fans and completists.

This is an excellent set all around!