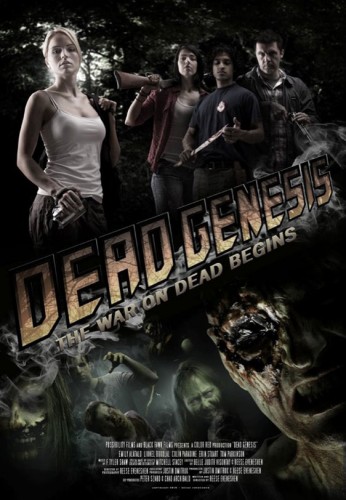 Seven months have passed since the dead took over. Many cities and states have been abandoned and left to die. Several self sufficient hunting groups have been established to take on the threat in a war aptly referred to as the ‘War on Dead’. Jillian Hurst, a former news writer and amateur documentarian, has set out to make a pro-war propaganda film to support the W.O.D. She joins up with a pack of renegade hunters known infamously to North America as ‘the deadheads’. The moral dynamics and hardships of fighting in a war against the undead are told from several different perspectives.

“Dead Genesis” was nothing like I thought it was going to be. I have seen so many predictable zombie films over the last couple of years that they are growing a bit tiresome. This film really takes a unique approach to the material and focuses on the impact that a zombie apocalypse has on the human psyche over a period of time. “Dead Genesis” is never about the zombies and always about their effect on the way we, as humans, deal with the tragedy and the toll it takes on us. I hope I am not over-stepping my boundaries by saying that this is in no way a horror film, at least not in the traditional sense. Instead it is much more like a drama, a character study. We have a core group of characters that all are unique in their own way, all have been changed by the “War on Dead”, then we get a peek at who they were and what they have become. All through the eyes of the young Jillian, who is making a documentary about the group of freedom fighters known as the Dead Heads. This is true independent cinema, a film that tells its story in a way that is both refreshing and depressing at the same time.

“Dead Genesis” opens with the first day of the outbreak and takes us to 217 days in all within the first seven minutes. This is basically a summary of events, the how it happened. Though no major details are given, we get the idea, which quickly lead us to Jillian Hurst (Emily Alatalo) who is hired to make a documentary on one of the hunting packs. The hunting packs are being used by the government as a means to wipe out as many of the undead as possible. Hunting packs are just average men and women who have been transformed by the tragedy. When Jillian meets up with the Dead Heads for the first time, through her eyes we get to see how they live their lives every day, the horrors they see, and the nightmares they live.

My only complaint about the film was that somewhere in the first 50min, the film drags. There was a point where I was growing bored and wanted nothing to do with the movie. I’m guessing that was because I was waiting for something to happen, an ambush, an attack, something exciting. Nothing like that really does and I’m happy that it didn’t. I wasn’t prepared for the film and the fact that it was more of a drama. When this sinks in, the characters become relatable, they become a friend or a brother, sister, etc.

They become human, they become us. That is when “Dead Genesis” rises above the others in the genre and accomplishes what (it kills me to write this down but it’s true) George Romero could not in his recent entries in the genre. The social commentary shines through and the lines between what is right and wrong become horribly blurred. Each member of the group is interviewed by Jillian for the documentary and we are given a look at who they were and what they have become. The dreams they have lost and what they are trying to hold on to. Strong stuff for a micro-budgeted feature film accomplish, “Dead Genesis” is a homerun and a powerful film!! The acting from the mostly unknown cast is top-notch. And yes, there is some gore and the effects are great, always selling the picture. There’s also a seriously disturbing sequence when our characters head out for a little “R &R” at the local bar. Not for the weak!!

“Dead Genesis” is a refreshing and disturbing look at a society that is changed by tragedy. I can only hope that this little picture doesn’t get lost in the shuffle and well worth your precious time. Easily a 5 star film. Writer/director Reese Eveneshen has proven with his first feature that he has a voice and something to say. Can’t wait to see where he goes from here. 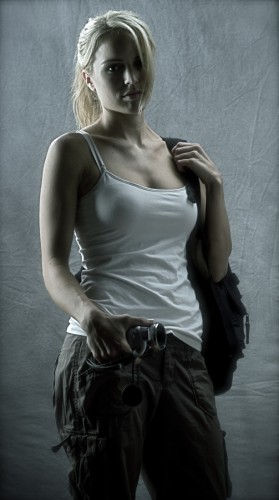