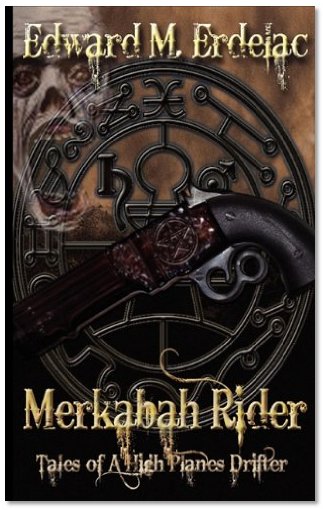 Stop wasting your time reading this review and read Ed Ederlac’s amazing episodic novel Merkabah Rider: Tales of a High Plains Drifter. Do so, and there is no doubt that you will quickly gobble up episodes 1-4 contained therein and then immediately seek out, and consume, the following installment of four episodes. Thereafter, you will most certainly be overjoyed to learn that the third installment was released just a few weeks ago (December 1, 2011), and you will feel compelled to find it and devour the five newest episodes as well. Then, you will sadly realize you are finished, and must patiently (or impatiently) await publication of the next (and final?) installment of the saga. You might even pathetically find yourself reading the glossaries from A to Z, in in order to get a fix while you wait.

Regardless of how you feel about westerns — Regardless of how you feel about Jewish mysticism (and even if you even know nothing of it) — Regardless of how you feel about episodic novels themselves — Once you start reading Merkabah Rider: Tales of a High Plains Drifter, you will be sucked in and relish it. I am not a fan of westerns. I didn’t expect there would be any aspect of Jewish Myth or Mysticism that would capture my interest. I am also not particularly fond of episodic stories unless, embarrassingly, they are on television. However, within the first few pages of the first episode my curiosity was piqued and my appetite, whet. Not long after, I absolutely entertained and surprisingly impressed. Impressed with the author’s power to take various subject matter for which I held no favorable predisposition or prior interest, and make me want more. Equally impressive was how the seemingly incompatible elements of a western setting are seamlessly intertwined with the gods & demons, heros & monsters, mayhem & magic, and more of Hebrew history and lore. What Erdelac has done here in this regard seems almost magical itself.

This series of tales follows The Merkabah Rider (or simply “Rider,” if he were to introduce himself to you as a stranger), who is a Hasidic Jewish mystic and gunslinger traveling in search of his former mentor, Adon, seeking vengeance. Along the way, The Rider encounters various evils and an assortment of interesting and richly drawn characters. The Rider’s interacts with all shapes and sizes of both the human and supernatural beings during his journey. In doing so, he protects himself and others through the use of his earthly and mystic knowledge, weapons and armor, as we learn more about him, and the perils on the horizon, with each subsequent story.

Summaries of the four episodes contained in this first installment of The Merkabah Rider series are below. I have done my best to avoid spoilers in providing these summaries. I suggest that the episodes be read in order the order in which the are presented for the best experience; although, it does not appear to be absolutely necessary. The review above is intended to address the entire existing series of books, including Merkabah Rider: The Mensch With No Name (Episodes 5-8) and Merkabah Rider: Have Glyphs Will Travel (Episodes 9-13). Summaries of episodes 5-8 and 9-13 will follow shortly in separate reviews, as will hopefully occur when the fourth (and perhaps final) book is published.

The Rider travels to the mining town of Delerium Tremens and learns of a wave of suspected child kidnappings. Most recently, a preacher’s daughter has gone missing, and the townspeople are growing more fearful and unruly as a result. Fueled by prejudice and hatred, blame is being directed toward the residents of a nearby Jewish settlement, as the situation escalates to the brink of violence. The Rider is compelled to investigate the situation on both the earthly and astral planes in an attempt to learn the truth about the children who have disappeared. Could an ancient demon be involved? If so, who is doing its bidding?

As The Rider approaches the border town of Polvo Arrido, he traverses through a violent dust storm on the outskirts. When he arrives, the town is nearly deserted even though all things seem to indicate that it was recently well-populated and thriving. The gang of violent bandits who apparently now rule the town may likely be responsible for the flourishing town’s untimely demise. However, it appears the there might be a nefarious supernatural component to what happened in this town as well.

The Rider discovers massacred Franciscan mission and follows his vision and instinct in pursuit of the wrongdoer. This aberration from his mission to find his former mentor, Adon, nearly kills him but for the kindness of a peculiar stranger. The Rider learns much about himself and his past during the life-threatening detour, as he seeks out a dangerous villain. One who is consumed by evil, and who has left long trail of unspeakable brutality his wake.