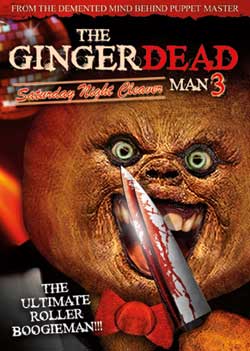 After escaping from jail, The Gingerdead Man finds himself in a time machine headed for 1976. He arrives in the middle of a roller-boogie contest… but the party is just getting started for the infamous cookie killer. After taking in the sights of the beautiful roller girls, Gingerdead gets back to his old murderous ways, causing more bloody mayhem than ever before.

Everyone’s favorite killer cookie is back – and groovier than ever! That’s right, Full Moon Features has released a third entry in their Gingerdead Man series. It began in 2005 with The Gingerdead Man. Despite the plot’s obvious absurdity – a killer’s ashes are baked into a batch of cookies, resulting in the titular monster – the film plays as a relatively straightforward slasher with none other than Gary Busey in the lead. 2008’s follow-up, Gingerdead Man 2: Passion of the Crust, went a decidedly different route, using over-the-top humor to facilitate the story.

Gingerdead Man 3: Saturday Night Cleaver continues the outrageous formula of the previous installment. This makes sense, given that William Butler and Muffy Bolding, two-thirds of the writing team behind Part 2, penned the film. Butler also co-wrote the original, and now he is in the director’s chair as well.

The film opens with a poor Silence of the Lambs parody that looks like something out of a Scary Movie sequel. FBI agent Clarissa Darling (Laura Kachergus) visits the Scientific Research Institute for the Study of Homicidal Baked Goods to interview the infamous Gingerdead Man in an attempt to discover what ingredients drive him to kill. The Gingerdead Man does his best Anthony Hopkins impression with a British accent and the iconic Hannibal Lecter mask. 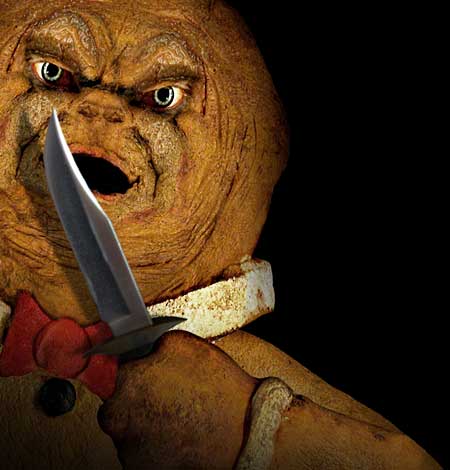 During the interview – which lifts dialogue from The Silence of the Lambs and injects it with crude (and pastry-related) jokes – the prison’s alarm sounds. A group of activists infiltrates the facility and releases all of the entrapped baked goods. The Gingerdead Man’s first act as a free man – er, cookie – is to shout “Fuck you!” at the sympathizer who freed him and then bite her nose off.

The pint-sized killer runs away, seeking a safe place to hide. He happens upon a room labeled Time Travel Studies and hops into the time machine to escape. He ends up in 1976 – to quote the Gingerdead Man, “Of all the sh*thead decades to get stranded in!” – at the Skateland rink amidst a roller boogie pageant.

Much to the local disco fans’ dismay, rink owner Trixie (Kent Fuher) says this will be the last such event at their beloved utopia, as the IRS plans to shut it down for unpaid back taxes. While everyone is focused on either raising money (a bikini car wash is organized) or enjoying one last disco party (by partaking in copious amounts of drugs and/or sex), Trxie’s niece, Cherry Wright (Paris Wagner), is the only one who sees the Gingerdead Man running around. Her fears subside when she meets Randy (Steve-Michael McLure), a boy who works there, and the pair fawn over each other.

When some of the local girls give Cherry a makeover and enter her into the competition, the reigning queen and all-around bitch, Tammy (Kimberly Pfeffer), hatches a plan to embarrass her by dumping pig’s blood on her. This obvious reference to Carrie is apropos, since Cherry is a caricature of the Carrie character. Not only are they both awkward, cute blondes, but they both possess telekinetic powers when provoked. Naturally, Cherry ultimately uses them to battle the Gingerdead Man.

The Gingerdead Man is created using a mix of puppetry for close ups and CGI for wide shots. While the puppet work adds to the schlocky charm, the CGI is distracting. The same can be said about the death scenes, which foolishly use an abundance of CGI, including digital blood splatter. This is particularly shameful given that the death scenes are surprisingly inspired for a film of this ilk. There is a drug-fueled threesome interrupted by the barrage of a nailgun and a car wish that ends abruptly when the ditzy girls unknowingly spray each other with acid, to name a few.

No one could ever replace the almighty Busey as the voice of the Gingerdead Man, but Butler does his best to fill his shoes. Some of the jokes don’t land, but the cheesy puns, wise cracks and foul language are all in good fun. The humor is shamelessly lowbrow – we even get to see a gingerbread penis during a Porky’s spoof – but that’s what makes it so entertaining. The film ends with a nod to Bill and Ted’s Excellent Adventure that’s so batsh*t crazy that you can’t help but laugh.

Gingerdead Man 3’s main problem is that it relies too heavily on spoofs, which brings to mind the soulless works of Jason Friedberg and Aaron Seltzer (Epic Movie, Date Movie, et al.). Gingerdead Man isn’t close to that level of idiocy, but it’s difficult avoid making the connection while viewing the film. The parodies here are at least woven into the storyline, even if they are a bit overt at times; it’s not a haphazard, plotless collection of spoofs.

Gingerdead Man 3: Saturday Night Cleaver may not quite live up to the previews two entries, but it still packs a ton of retro fun into about 75 minutes. The picture serves its purpose, but I think it’s time to bring in some fresh writing talent for the inevitable next sequel. Unlike many of Full Moon’s franchises that are milked dry, Gingerdead Man still has plenty of life baked in it.