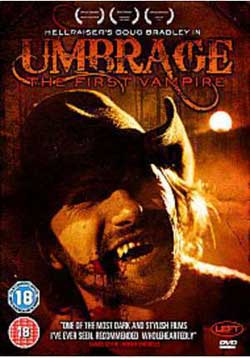 When a dysfunctional family moves into a remote farm, they find themselves in the middle of a centuries-old feud. As night falls hard, terror emerges from the darkness in the form of a deadly seductress, and a cowboy vampire hell-bent on revenge…

“I’m not a witch. I’m an ornithologist.”

There were a few things I found fun about Umbrage. In the beginning , there’s “An American Werewolf in London” reference (there was also a really weak reference to Stanley Kubrick’s “The Shining”, and another to Sam Raimi’s “Army of Darkness”, though weak, made me smile) At first I thought there might be a cameo by Vinnie Paul, the drummer from Pantera, but that didn’t pan out. Doug Bradley, aka Pinhead was in it, sans the pins. And the opening song, “ Death Meets me Here” by The Barker Band, made me happy as well. Oh, and the random acts of nakedness by Natalie Celino weren’t unpleasant. That should be mentioned. 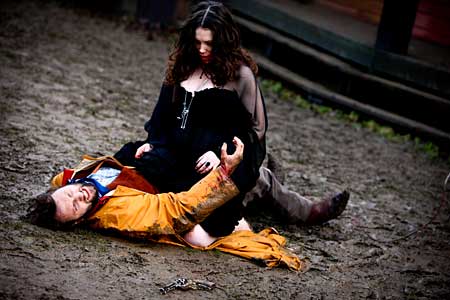 There are some really nice camera shots interspersed throughout the film that genuinely lend some creepiness and tension through the use of dramatic camera angles and effective, if not exactly original, lighting. At other times, however, there are shots that just don’t makes sense: the family arguing around a hobbled car, the smoke from the engine obscuring two of the three actors in the scene; a guy pointing his flashlight into the forest, the POV change not illuminating that forest whatsoever, and other such anomalies.

The pacing is hard to describe. A whole bunch happens in the first 30 minutes of the film; however the meat of the story seems to take forever to get going. That could be because of the development of the dysfunctional family’s relationship with each other. At some point early on I got it: they don’t get along. Once we get past that tediousness, we are subjected to the back story of the seductress and then the back story of the cowboy. Both of which are related by the cowboy to the gothy British girl (couldn’t stop thinking about Winona Ryder in Beetlejuice) over the course of another 30 minutes. Before you know it, though, the movie is riding off into the sunset leaving you with this feeling of WTF? In other movies that’s a good thing (Black Swan anyone?). Here however, I just needed some Tylenol.

And then there’s the cowboy vampire, tilting up his Stetson with the tip of his revolver…because everyone knows that no self-respecting vampire leaves his coffin without his Smith and Wesson. And he has an Irish accent. I was not aware of the presence of Irish cowboys. I mean, I know that there were Irish immigrants in the Old West, but they wore derbies didn’t they? And how did this one get back to England? And if he was savvy enough to do that after a hundred years or so, wouldn’t he update his garb a bit, so as not to stand out? And to make matters worse he’s a day walker. That’s right. Just like that twit Edward Cullen minus the stripper dust. Ugh.

Lastly, the soundtrack was great, if not exactly appropriate. It was somewhere between “O Brother Where Art Thou?” and “Crazy Heart” so I don’t really understand its presence in a movie about a vampire, even if it’s about a cowboy vampire. Why? He was an Irish cowboy vampire. Perhaps Celtic Woman, or Celtic Thunder. Or really step it up and use some Mumford and Sons. No U2 though. At least not anything after the Joshua Tree. They really jumped the shark after that record.

So, even though I was touched by the dedication (my good vibes to you Mr. Cullingham), I can’t really recommend this movie as much as I’d like to. My favorite part of the movie was the songs by the Barker Band.