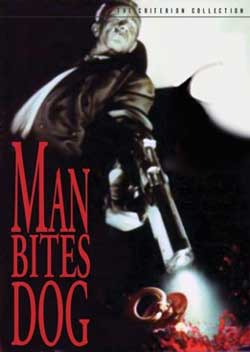 A satirical look at how the media affects and promotes violence in modern society. Spoofing reality television, a fascinated documentary crew follows a charismatic yet unrepentant serial killer on his murder sprees. The crew attempts to objectively document the horror, but as the violence escalates, they ultimately get sucked into participating. Man Bites Dog won the International Critics’ Prize at the 1992 Cannes Film Festival.

Hell-o, cult of cinematic carnage scavengers. Today’s review is for a much talked about film called Man Bites Dog: It could happen in your neighborhood. This film has had a cult following and word of mouth appraisal by many fans for the past few years. It is quite relentless as far as on screen murders go. The body count is high in this documentary style filming of a sociopath serial killer as he visits with his family, talks to children that are playing with toy guns, talks about killing midgets and kills everyone that pretty much steps in front of the camera’s lens. 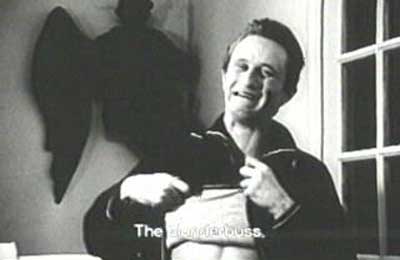 Our psychotic hero, Ben, terrorizes the town with a behind the scenes look at every drop of blood left along the way. There are mostly point blank range assassinations throughout the film with a pistol. It starts out with a strangulation within the first few seconds of the film and just gets more twisted from that point and throughout the film. Another strangulation of an elderly woman was unique as her dentures come out of her mouth during the asphyxiation.

I liked this film, but not as much as I thought I would after the years of hype that surrounded its name. It was very brutal indeed and during the ending, the murders became much more sadistic and revolting. It has its moment of subtly shocking moments and later goes into close-up and in your face shock as well. The whole time throughout is peppered with black humor that you’ll have to read the subtitles to keep up with or understand. 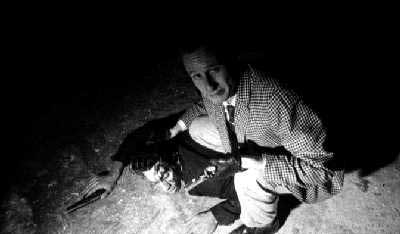 In my slightly twisted opinion, I think the gun shot victims are the most memorable due to the surprising element involved with each first shot fired. Some are comedic even in their own right and style of execution. The acting in the film is well done throughout and the disturb factor takes a little to get going, but it starts to strike nerves within the middle of the film. One downfall I found was all of the full frontal male nudity. It seriously could have done without. Ben kills a black man and proclaims his jealousy of the size of their penises. He makes a comment on the age(eighteen) of the boy and how large it already was for his age. In some way, it is showing a side not to like about the object of the documentary being filmed, but the rest of his (non murderous) actions contradict this side of inhumane rage. I thought the film was unique in a way that it kept you guessing if Ben would be loving or blood thirsty in the next scene. 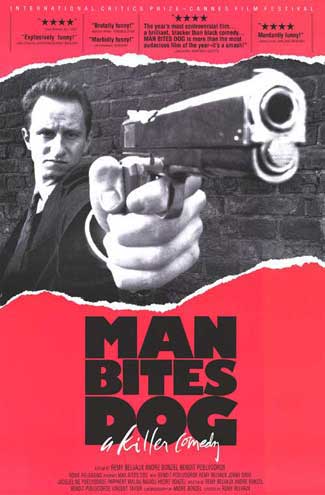 I’m not usually into humorous Horror, but this kind of is soothing for the fact that the humor stays as dark as possible. One point that stands out is when Ben and the camera crew are eating in a public restaurant and he stands up in a drunken slur and recites poetry about the ocean, which he seemed to hold quite dear. His poetic speech is concluded in a pool of vomit beneath the table. His passion for the ocean is also expressed after receiving a seagull figurine as a gift. I thought Benoit Poelvoorde did a good job at playing a serial killer that you kind of start to like along his quest for fame and torture. He gets the documenting film crew to assist as he rapes and tortures a couple, A Clockwork Orange style. 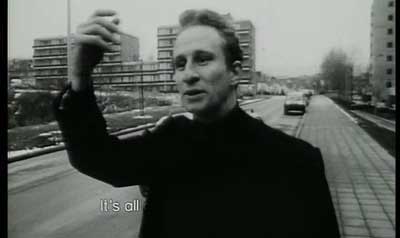 The outcome is pretty brutal. Another home invasion sequence is favorable to the invasion scene is August Underground’s Penance or Funny games, as the entire family, child included, is snuffed out one by one. Another bit of dark humor is displayed as he hi-jacks a car, makes the driver take the wheel as he commences drive-bys down a busy street and kills the driver afterwards for an undeserved tip. His violent sense of humor is attempted to be overlooked by the talent of moving his ears and nostrils as a redeeming characteristic to the clashing sadistic nature in which he generally displays.

Over all, for a pseudo murder-mentary, this is worth checking out at least once. It wasn’t something I absolutely loved, but it wasn’t all that bad either. Its disturbing moments were there. This film was also one of the influences in the making of August Underground. I give this film, Man Bites Dog: It could happen in your neighborhood TWO HORNS UP. It’s worth the watch.