Film Review: More Brains! A Return To The Living Dead (2011) 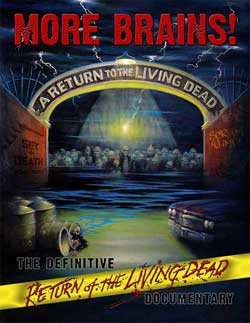 A documentary detailing the making of the 1985 classic “Return Of The Living Dead” as told by those who worked on the film.

I remember the day I saw “Return Of The Living Dead” like it was yesterday. Partly because I had just had my heart broken by some filthy tramp who took up over a year of my life. I was so downtrodden afterwards that I made my way over to Times Square to drown my sorrows in a couple of Nathan’s franks & whatever was playing on the strip that evening. I had actually forgotten that “Return Of The Living Dead” had opened that day. Imagine my surprise when I realized that I could drown my sorrows in 90 minutes of gruesome gore & black comedy!

And “ROTLD” was the perfect antidote to the poison that that rotten broad had injected into my veins. A near perfect horror film, it tells the story of a gang of punks who find themselves trapped in a medical supply building that just happens to be located near a cemetery. And the unfortunate accident that ends up reanimating the denizens of the cemetery who are hungry, not for human flesh though. These guys need brains…MORE BRAINS!! 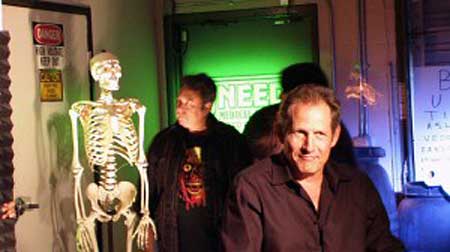 The brains behind “Never Sleep Again”, the definitive documentary on the entire series of “Nightmare On Elm Street” films, Bill Philputt & Christian Sellers, have returned with an all new documentary detailing the making of “ROTLD”. And as entertaining as “Never Sleep Again” is, “More Brains” seemed to be a lot more fun for me to watch. I actually found myself smiling through the majority of it. The fact that it focuses on the one film rather than an entire series of films as “Never Sleep Again” does probably helps. That plus the fact that a lot of the people who participated in the film are genuinely entertaining to listen to. 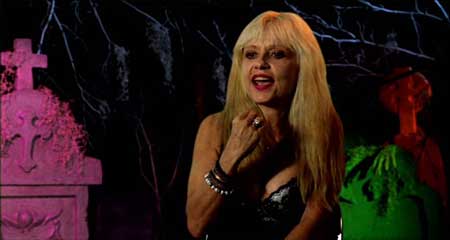 “More Brains” manages to corral nearly everyone who’s still alive from the original production to offer commentary on just about every aspect of the production. The only thing that’s sort of glossed over is the outstanding soundtrack but they even managed to find Stacey Q who offers a few bon mots on her tune “Tonight(We’ll Make Love Till We Die), which is featured in one of the most analyzed segments of the film: Linnea Quigley’s epic nude dance scene. 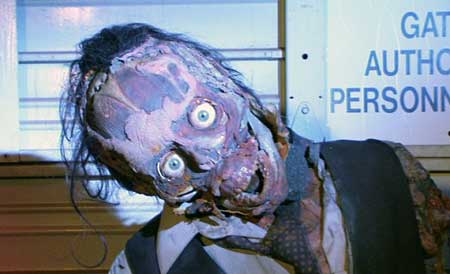 Apparently everyone has opinions on that scene. As a matter of fact, everyone has some pretty strong opinions on a lot of what was going on while making this movie. We’re treated to some really candid observations from the Don Calfa, Brian Peck (who also narrates & is terrifically funny), Miguel Nunez, Jewel Shepard, Linnea Quigley, Beverly Randolph, James Karen, Thom Matthews, Allan ‘Tarman’ Trautman and John Philbin but also with producers, effects technicians, assistant editors, casting directors, production designer (and legendary comic book artist) William Stout (Who sort of looks like the Mad Hatter of “Alice In Wonderland” fame here, John Russo and a few others. Pretty much everyone who is still alive (meaning that director Dan O’Bannon, actor Mark Venturini (Who passed away from Leukemia) and producer Tom Fox aren’t interviewed, obviously) shows up here at one point and all of them have anecdotes to share. All of their stories are fascinating & more than a few of them are quite revealing as well. This was a troubled production that tested the mettle of nearly all who participated in it.

Some of the best stories come from Clu Culager. I met Mr. Culager a few years ago with his son John & congratulated him on the way he fought for his son during his travails on the “Project: Greenlight” series from a ways back. The man is a force of nature who is most definitely from the “Old School” camp of making films. Lord knows he’s seen it all & he has no problems telling anyone that. Apparently he was bought into the production very late into production & had frequent clashes with Director Dan O’Bannon. The best parts of his comments are his observations on how things should’ve been done. You can’t help but love the man. Some of the other fascinating comments come from Jewel Shepherd, who swears she didn’t sleep with O’Bannon to get her role & Miguel Nunez, who was actually homeless as he participated in the film. All cast members have some terrific & some not so terrific memories of their six weeks together and it’s a truly engrossing documentary to delve into. It gets into so many of the little details of the making of the film…stuff that I would’ve never thought to ask about. There is a bit of sniping as well, mostly directed at Shepherd, who seems to really not care much at all. But it’s good natured sniping… 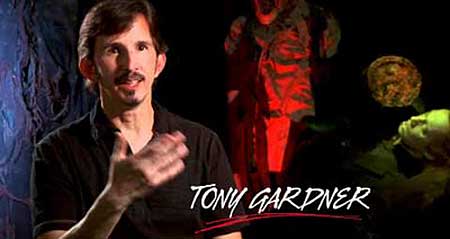 It’s hard for me to say much more about this without ruining it for you. Such is the nature of reviewing revelatory documentaries such as this one. It tells so many stories from such a wide array of participants that to say more would be ruinous if you plan on seeing it. But by all means, it should be seen by all fans of the film & all fans of horror movies as well. It’s a very special kind of film, one that entertains as it reveals all of the ugliness that goes on while making a zombie movie. A game changing zombie movie in fact. It’s very easy for me to rate this film five shrouds for it’s entertainment value alone. The fact that it includes a lot of scenes from the film as well just makes it all the better to watch. If you’re a fan of the film you will not be disappointed. If you’re not a fan, what’s wrong with you? A must see!

One final note. Actress Jewel Shepherd is suffering from Breast Cancer & the good folks at Dark Delicacies are trying to help raise funds for her treatment. If you’d like to contribute, click on this link: www.darkdel.com/index.htm?jewel.htm&1 & lend a hand. Every little bit counts…