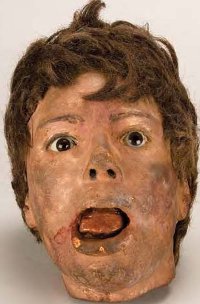 We recevied this list today, that we’d like to share…and course we were interested in the content as well. How about those rare items, that horror collectors seek? What ever happened to them?? Though for me, it would have to be the Freddy Glove! Thanx to WikiCollecting, you can read about horror movie memorabilia and more on their site

The pumpkins are carved, the apples are ready for bobbing and the clown mask has been retrieved from the loft. Yes, Wikicollecting is fully prepared for Halloween.

And to help celebrate here is our Top 10 items of horror movie memorabilia.

It features the green-hued Hungarian actor Bela Lugosi with an unnerving glint in his eye.

The film made its debut at New York’s Roxy Theatre, where several members of the audience were reported to have fainted from the shock of the experience.

Just the sight of Anthony Hopkins is enough to make many people go cold.

The suit he wore during the Hannibal scene in which Lecter disembowels police officer Renaldo Pazzi sold for $800 at Profiles in History in 2008.

The 1968 black-and-white zombie film is widely regarded as one of the scariest ever made.

The tailor-made doll, dressed in striped shirt and blue overalls, succeeded in scaring a succession of movie goers in the early 90’s.

The model was bought by singer Chris de Burgh, who was popular in the 80’s.

The ring Bela Lugosi wore during the filming of the 1948 movie, in which he reprises his role of Dracula, sold for $40,000 at Profiles in History in 2009.

The ring had previously been worn by John Carradine in Universal’s House of Frankenstein in 1944 and House of Dracula in 1945.

This fibreglass axe was used in the iconic scene in which Jack Torrance breaks his way in to a hotel room at the climax of the 1980 Stanley Kubrick film.

His subsequent “Here’s Johnny” line is one of movie history’s greatest “ad-libs”.

Signed Freddy Krueger hat from A Nightmare on Elm Street – $4,500

The hat is also signed by director of the film Wes Craven and actor John Saxon.

The only model used in the gruesome beheading scene in the 1980 Paramount movie sold for $4,250 at Profiles in History in 2006.

The fibreglass head was cast to the same expression as that produced by actress Betsy Palmer.

The film has spawned 10 sequels at last count.