Home | ‘The Zombie King’ to bring you 7 Days in Hell

‘The Zombie King’ to bring you 7 Days in Hell 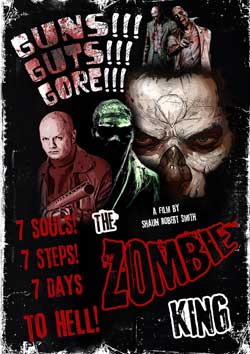 New production moves forward titled “The Zombie King”, we got some advance posters below!

7 Souls, 7 Steps, 7 Days to Hell!
“The Zombie King”, Northern Girl Productions first feature, is a story about an oncoming zombie apocalypse and the dead inheriting the earth.

The story centres on an every day man, Samuel Peters who makes a pact with the God of malevolence Kalfu to help bring back his wife from the grave. Peters becomes The Zombie King, still a man but a leader of the ever growing horde of zombies, zombies which …have been brought back from the dead through the practise of Voodoo and, who, completely wipe out the town he lives in.

Once the Government get wind of what is going on, they set a perimeter around the town and the area and employ a shoot on sight policy.

Enter three men Ed (George McCluskey), Munch, and Boris (Jay Sutherland). In from the city on a paintballing weekend, and lost, with no idea of what is going on around them. They think they encounter a “Zombie Walk” until they see the local farmer, obviously there to complain about the “march”, getting ripped limb from limb.

Running for their lives their first encounter, albeit frightening, is nothing compared to what lies ahead of them.

They inadvertently meet up with Simo (Giles Alderson) the leader of another group and join forces. From here the group battle with the horde until they decide to take refuge in the local church, where they encounter a bizarre drunken Priest, Father Lawrence (Patrick Toomey) who has completely lost the plot and has a gung ho military style approach to dealing with the problem at hand. 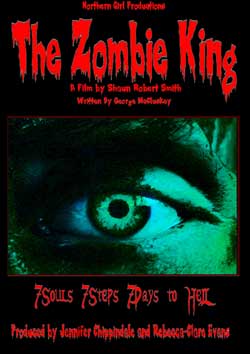 The Zombie King, Director Shaun Robert Smith vision for this film is a Grindhouse style feature film with a blend of comedy, action, and nail biting tension, and a film which will appeal to horror fans and zombie lovers alike….