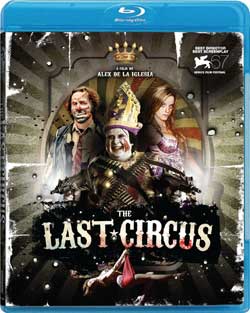 1937, Spain is in the midst of the brutal Spanish Civil War. A “Happy” circus clown is interrupted mid-performance and forcibly recruited by a militia. Still in his costume, he is handed a machete and led into battle against National soldiers, where he single handedly massacres an entire platoon. Fast forward to 1973, the tail end of the Franco regime. Javier, the son of the clown, dreams of following in his father’s career footsteps, but has seen too much tragedy in his life-he’s simply not funny and is only equipped to play the role of the Sad Clown. He finds work in a circus where he befriends an outlandish cast of characters, but as the Sad Clown he must take the abuse of the brutish Happy Clown Sergio, who humiliates Javier daily in the name of entertainment. It is here that he meets Natalia, a gorgeous acrobat, and abused wife of Sergio. Javier falls deeply in love with Natalia and tries to rescue her from her cruel and violent husband, unleashing Sergio’s jealousy. But Natalia is torn between her affection towards Javier and her lust for Sergio

In the midst of so many films that seem to lack any substance, this surprise hit comes way of France featuring an original storyline and cultish quirk that in some ways reminds on of Santa Sangre. The DVD comes euqipeed with subtitles and both French and English audio. Also if you like extras, there are plenty here.

Álex de la Iglesia has directed a sorrid tale of life within the circus in the midst of the Spanish Civil War. Javier (Carlos Areces) has lived a life surrounded by clowns. His grandfather, his father and his inevitable future follow in the wake of a desire to don makeup and perform within a circus. Javier remembers quite well when his brave father fought against intruders in a surreal moment of donning womens clothing and face paint. It was a touchy time that saw many lives extinguished while others continued to serve within the pains of war. His father who at one time able to take out an entire platoon finds himself crushed under the weight of a rider and his horse when things go astray. Javier grows up, but as an adult takes on a job at a local circus sporting a “sad clown” persona to the wishes of his long time deceased father. 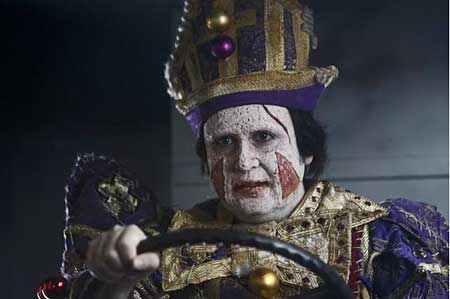 It is this circus that Javier meets the rude, self absorbed drunkard clown Sergio (Antonio de la Torre). Sergio does as he wishes knowing that his act keeps the circus alive. Simply enough kids dig his clown self. He also is one damaging boyfriend to Natalia (Carolina Bang) of whom Javier is instantly smitten with. This attraction is quickly realized by Natalia who becomes the object of desire for the 2 clowns. Though as a jealous lover Sergio discovers his girlfriend cheating and puts Javier into the hospital. The tension builds as the smitten Javier retaliates deforming Sergio’s face. In fact, his face is so broken that he instantly takes on the image of something your more likely to see in a horror film.

It is at this point that the film takes on an abstract sort of narrative. Javier runs naked into the woods, turns into somewhat of a slave and becomes a pet to one of the town’s military leaders. Its quite odd , but eloquently done. Javier essentially has a breakdown, though it’s the allure of some bishop costuming that sends a volt into his psyche. Javier freaks out, creates a vaudeville harlequin-like costume and seals it by deforming his face thru burning and scarring. It’s quite nasty and bizarre, but more bizarre to see the horrific image he has created for himself. For some reason his transformation (which is seen on the DVD cover) reminded me of one of those dolls that the Spawn franchise might phantom up. 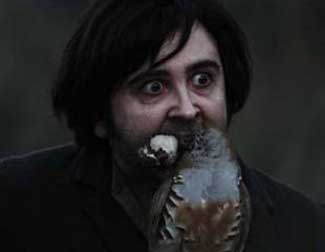 With Natalia still at the center of attraction, it’s a battle between the 2 ugly clowns who profess their love, try and claim her for themselves and cause a chaotic mess in their wake. The setting moves in the direction of a stone church which houses the final act. Even within the violence of this film it manages to stay beautifully shot, beautifully framed and edited to a almost symphonic tapestry of creative film making. It’s hybrid approach and zany turn of events instantly jettisons this one into cult stratosphere. Many will say they have seen nothing like it, which is hard to do these days but perfectly correct. 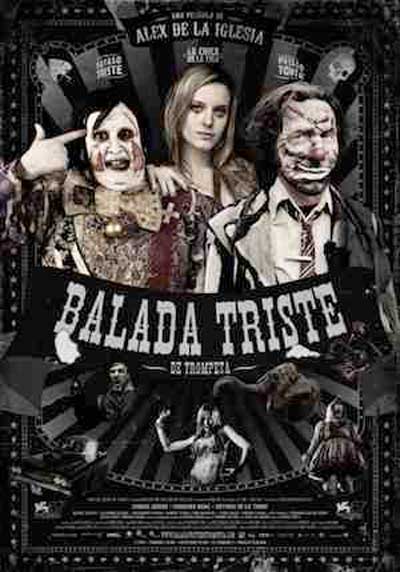 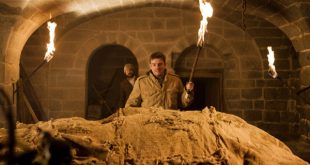 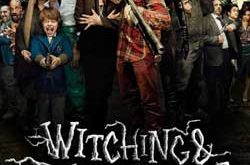