SYNOPSIS:
“Arnie Cunningham is a typical high school nerd who is picked on, overruled by his parents, and has very few friends. Until he meets Christine, a run-down 1958 Plymouth Fury and buys her. Arnie learns that Christine has a thing for him and devotes his time to restoring her to mint condition. But overtime, Arnie begins to change and becomes disconnected with reality and his friends. Arnie’s girlfriend Leigh and best friend Dennis find out that Christine’s previous owner cared about nothing else when he bought her and find out that Arnie is becoming just like him. The only way they can bring Arnie back to reality is to destroy Christine, but Arnie and Christine are ready to destroy them first and any one else who gets in their way.” (courtesy IMDB)

REVIEW:
In these enlightened times we look back upon John Carpenter‘s The Thing (1982) with fondness, with many critics and fans recognising its importance and standing as a classic of both horror and film. But such was not always the case. On its initial release in 1982, The Thing was considered a box-office flop and collected some of the most vitriolic reviews ever accorded to a horror film. It was almost as if the disgust factor inherent in John W. Campbell’s original novella simply proved too much for mainstream audience sensibilities and often angered them.

As if chastened by this critical and commercial failure, John’s next venture was restrained in the extreme, but nonetheless effective for it. Christine (1983), adapted from the popular Stephen King novel, told the story of a car apparently possessed of a mind of her own. Bought as a junkyard jalopy by a wimpish put-upon teenager, the 1958 Plymouth Fury – when lovingly restored by the boy – becomes a jealous and murderously demonic vehicle of vengeance.

John can work hard and fast when he wants to – Christine was actually scripted, filmed and released within a year of publication of the novel on which it is based. It’s an excellent film, but by no means a great one. There are special problems when transferring a best-selling book to the screen, because it exists already as a series of images in the minds of the public. John treats the story with respect, but with a curious remoteness as well. There is little attempt to involve us directly in the action with, say, subjective camerawork or editing – at no time do we feel personally threatened. Most of Christine’s victims are thoroughly nasty types. 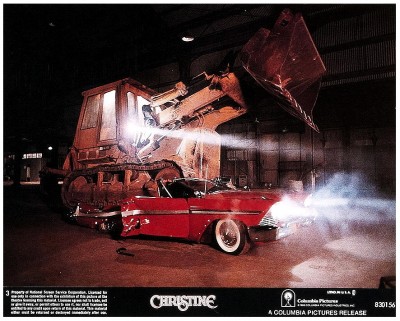 Ably supported by veteran actors Harry Dean Stanton, Robert Prosky and Roberts Blossom, Keith Gordon gives an accomplished performance as the pimply, gangly youth transformed by Christine’s influence into a darkly good-looking young man. He is both her lover and her saddest victim, falling prey (literally) to the great American myth of the machine as god. Also worthy of note is John Stockwell as the concerned best friend, who turned up in Oliver Stone’s Nixon (1995) as a White House staffer – this always amused me as his real-life father, Dean Stockwell, played the infamous Werewolf Of Washington (1973) two decades earlier.

The special effects are amazingly good. The car’s ability to reconstruct itself from rusty junk to gleaming sleekness being masterly achieved by Roy Arbogast, responsible for the mechanical effects seen in Close Encounters Of The Third Kind (1977), The Thing, Star Wars VI: Return Of The Jedi (1983), The Fugitive (1993) and thirty other Hollywood blockbusters. All this cost money, but some of the best effects are the cheap ones, notably the car radio that turns itself on to play fifties rock’n’roll when bent on vengeance. This is the film of an old-fashioned, skillful storyteller.

Christine is a finely crafted shocker with just enough shivers along the way to keep thrill-seekers satisfied but, perhaps more importantly, it reveals a more thoughtful understanding of the importance of characterisation, an aspect that John’s more recent efforts are often lacking. He may never make movies that directly reflect his rather enigmatic personality – he is not an auteur in that sense – but he is likely to go on giving us well-made genre movies that, occasionally, transcend their formula to vibrate uneasily within us. 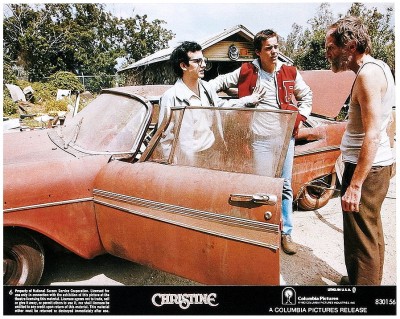 One aspect of John’s work may be a strength or a weakness, it’s hard to tell. He seems to be a Manichean, which is to say he seems to believe in Evil as existing outside humanity, as an absolute force which has the same integrity as Good. In Christine he took away any possible psychological reasons for the car’s behaviour and, in a bravura opening sequence, shows it wholly malicious while still on the assembly line, still wet behind the ears, so to speak. And it’s on that note I’ll bid you a good night and look forward to doing the zombie stomp with you again next week when I have the opportunity to lay at your feet another dead bird from the dodgy chicken shop known as Hollywood for…Horror News! Toodles! 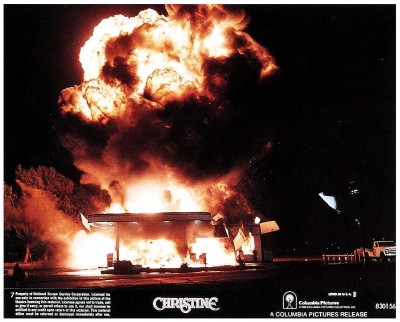