Top 10 Phrases said or Screamed while watching a Horror Film

We’ve all done it, sometimes even in a theater. No, not THAT. I’m talking about saying or screaming different phrases while watching a horror movie. These phrases may be something as simple as whispering under your breath or yelling at the top of your lungs in a crowded movie theater.

Most of these random outbursts are during a really horrible horror movie when there is nothing better to do then yell at the TV or movie screen. But sometimes these moments come when sheer terror is upon you. It’s almost like a reflex; the words just come out of your mouth just moments before you scream bloody murder.

Below I give you the top 10 phrases said or screamed while watching a horror film.

“Ahhhhh!”—I know it’s completely cliché, but this is the number one phrased the cross peoples lips while watching a horror movie. Sometimes these moments come when the tension is high and the suspense is building just before someone gets a knife through the throat. Or sometimes it may happen when your friend’s father comes bursting through the living room door causing you all to jump and scream even when the movie wasn’t scary (that happened a lot when I was a kid). So no matter how your “Ahhhh!” comes out, it is and always will be the most screamed phrase.

“Don’t go in there”—Your favorite character is approaching a door that has strange noises coming from behind it. You know he or she shouldn’t go through that door, and yet, your incessant yelling of this phrase does not cause the character to rethink what he is about to. However, when the character finally finds certain doom you might reply with the next phrase on my list.

“Told you so”—This phrase is usually directed towards fellow moviegoers as opposed to the TV or theater screen. This could be said after making a bet that the black guy would die first or that the little adopted girl really isn’t a girl. Either way it is said it still finishes out the top three on the list. 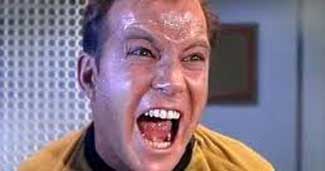 “RUN!”—I don’t think I have ever heard this phrase not being yelled. I think there would be very few people that would calmly tell the character to run even though the character was being chased by LeatherFace. By yelling this phrase, our blood gets pumping even more than it already was, and we are sitting at the edge of our seat yelling “RUN!” as loud as humanly possible.

“SHOOT HER/HIM/IT!!” – Just like the above phrase, this is never said in a calmly manor, it too is screamed at the top of our lungs. We all know that in horror movies people take their sweet time shooting people. This usually ends badly for the person holding the gun because it provides extra time for the villain or thing to get away or for the quiet character to show up with his or her own gun and completely change the plot of the film. So while we all sit in anticipation for someone to die, we are screaming this classic phrase.

“She’s a Zombie now, KILL HER!”—Everyone loves a Zombie movie, plain and simple. But it hurts us when we have to see the characters love interest get bitten. While everyone who is watching knows that the obvious thing to do is to kill the bitch, the main character sits and waits, hoping that his love interest is unlike anyone else on this planet and will be immune to Zombie bites. So while our character waits we’re yelling this phrase and wishing that our voices could travel through the TV and knock some sense into this guy before he is attacked by his ex-love interest.

“Well, now you’re screwed/f*cked/boned”—This phrase is usually said when you have tried your best to influence the characters on the screen by yelling any of the above phrases but still the characters have still managed to f*ck up their lives. After you say this line you usually throw your hands up in frustration because you know that all the characters are going to die. Some key elements that may influence this phrase being said may be: The only escape route is full of zombies, the truck has a dead battery, the keys to the house cant be found.

“WTF?!”— You are watching a horror movie and then a wild twist happens at the end that you never saw coming, or maybe you did see it coming. No matter if you saw it coming or not you may shout this phrase out of complete shock or out of complete stupidity. But this phrase can also be said in disgust. Such as a man has just been chopped up and put into a garbage back and what is still alive of him is attempting to escape.

“Stay together stupid!!!” – In every horror movie the characters feel the need to split up to cover more ground even though there is a horde of man eating Zombies in the adjacent forest. So as Jack and Jill separate from Donnie and Marrie, you are screaming this phrase while you are two inches away from the TV. 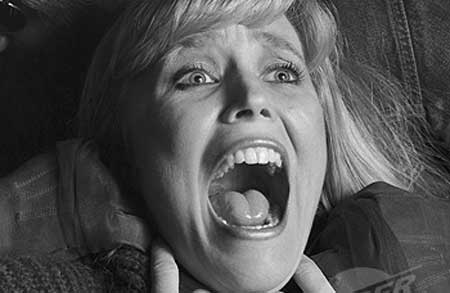 “LEAVE HER/HIM!” – Finishing out the list is probably my favorite line to yell even when I’m in a movie theater. All too often do the characters in a horror movie go back for the friend that has just been grabbed by the foot or has just been shot in the leg. But when they go back for him or her, both characters end up dying. I have told my friends on countless occasions that I would never go back for them, that I would save myself every time and leave them to die.

Top 10 Phrases said or Screamed while watching a Horror Film