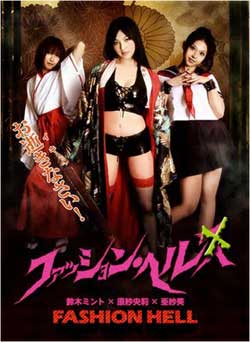 On their way back from their local baseball team’s game, Nakazu, Uno and Toshida have too much to drink and they end up visiting the sex parlor “Shogun” as a nod to Nakazu’s limited life as a single man. Nakazu has never been to a sex parlor before and he feels guilty about betraying his fiancée, Misa. He attempts to go but the other two are already far too excited to leave. Uno chooses Nonoko, very fetching in her school uniform, while Toshida picks Kaori, who is dressed in a pythoness costume. The two randy friends disappear with their chosen sex partners leaving Nakazu quietly sitting in the waiting room… until he hears unearthly, terrible screams…

From the Asian circle of absurd comes a slightly less exciting release that I’m glad let go of it’s original name “Fashion Hell”. This Jun Tsugita directed horror comedy revolves around a rather simple premise that doesn’t go much further than its small setting. Coming in at a little over and hour, it’s probably a good thing as I’m not sure how far they could take this one. Now before we get to into the plot you should be warned that there are some obvious misleading marketing reviews out there that call it everything its not. I think I laughed harder at those, than the actual product. In any case the reviews claimed it was scary, was Exorcist-like, was extremely brutal, and was hard to watch. Don’t believe these little marketing ploys, they exist to simply part you from a few dollars. We like to think that we are doing a service by calling out films as they really are, than they would LIKE you to believe. 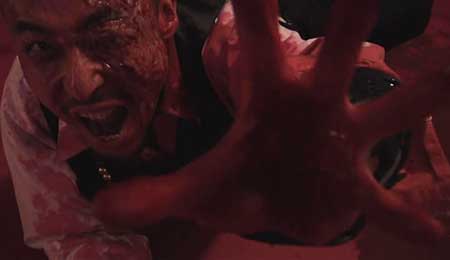 First this film is pretty close to a 80’s style release. It revolves around a sex massage parlor (brother) that calls itself Shogun. 3 friends have just finished one of their weekend baseball gatherings and notice the newly erected (pun intended) massage parlor across the street. One of them is reluctant with a new girlfriend he is loyal too, but the 2 persuade him to accompany them for a quickie.

The brothel is meant in a comedic tone, but to be honest there wasn’t anything that made me laugh. Inside a host entertains them as they choose there massager per way of an ass-thru-wall teaser. The ladies all seem to be somewhat un-enthused with their occupation in which we find out has a brutal closer. 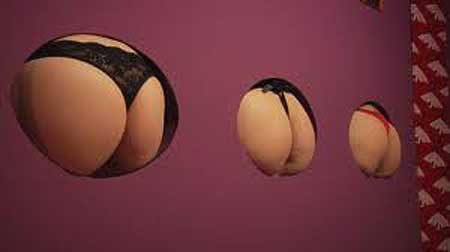 Ok, its not spoiler, to tell you that they end all the sessions with cutting, biting or melting off the mens penises. I say that, as it’s pretty much in most of the synopsis’s already. The ladies are cute, and do get naked but in the version I saw, all the hardcore penis shots were blocked out. That’s fine by me, I got the drift. One of the highlight devices is a pair of iron teeth that is worn between the escorts crotch. Use your imagination on how its used

As we discover, the parlor is actually a parlor from Hell which requires killing off any customers under the rule that “no one can leave”. 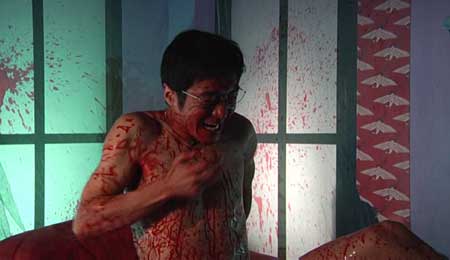 Now my primary road to attraction was the fact that the fx work was being handled Yoshihiro Nishimura (Tokyo gore Police, Machine Girl). However this film is nothing like the Tokyo Gore style releases and the gore is kept really minimal in comparison.

The movie suffers from a cheap budget and lack of any real script. If a film is to sport the comedic moniker, it might as well be at least somewhat funny, right? It ended up more on the campy, lame end that without the d*ck cutting moments would be entirely pointless. In fact, those parts were no level of extreme either, usually never shown (except for the blood after math) and a man screaming as his Johnson gets pulled off. Its pretty basic Asian horror with props that are too cheap to really feel like you’ve accomplished something by watching this. In any case the ladies are pretty hot and they don’t mind dancing topless more than a few dozen times to get you thru it. Leave this one on the shelf if you came looking for anything remotely familiar to Nishimura’s style. There are far better releases coming up that another cheesy Asian flick is not worth your time.