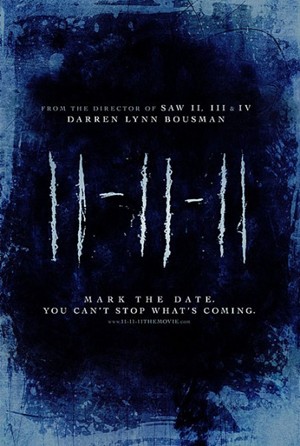 A horror-thriller set on 11:11 on the 11th day of the 11th month and concerning a entity from another world that enters the earthly realm through Heaven’s 11th gate.

Director Darren Lynn Bousman takes on a much written about phenomenon. For those who have stayed astute to numerology and the upcoming date of 11.11.11., already well know that there have been documented cases of persons who are seemingly haunted or obsessed with the reoccurrence of double digit numbers. More notably and the primary focal of the numbers is the set 11:11.

In this latest film which seems to take its marketing serious by debuting on the “actual” 11.11.11 date, this very study is explored to a mass of cinema goers. So while it is indeed a movie, the data that is used is actually centered around the phenomena itself. 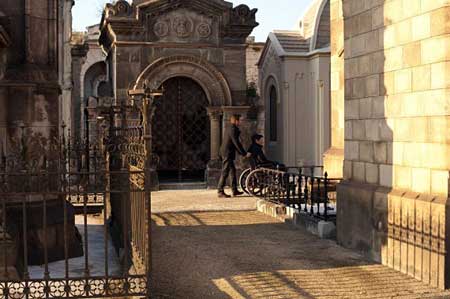 Timothy Gibbs plays Joseph Crone, a much heralded author who has gained a following of dedicated readers over the years. His works have become best sellers which sell in the millions. Though he has been struggling as of late with writing a follow up novel. This struggle seems to be connected with his insomnia and strange knack for awakening to a clock sporting an 11:11 time display on a pretty consistent basis. This particular number set has also shown up in various points through-out his life usually on tragic or dramatic events. We learn that his wife an child were killed in a fire that an over passionate fan had caused in relation to one of his books. Joseph is called to the side of his dying father in his last days as well to his childhood home. It is here that he reacquaints his relationship with his younger brother Samuel (Michael Landes). 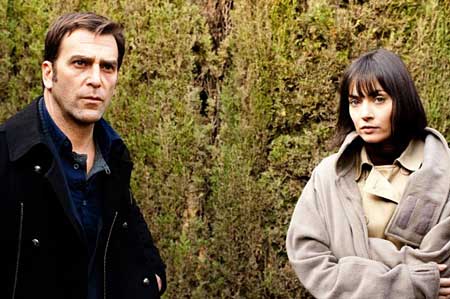 Samuel is a priest who has spent the better portion of his life honoring God and trying to build up his church following. Joseph, the darker atheist of the bunch doesn’t give much thought to religion or what his family has built up over the years. Though while he is making amends within his family he begins to open up to some of its possibilities. During his stay his frequency in seeing this 11:11 sign increases taking him on a journey of research to really discover why this is happening. He finds that the 11:11 number is in fact a sign or event of that which seems to be escalating into “something”. The term “Midwayers” is introduced and the eerie reoccurring appearance of these in-between beings becomes more frequent.

Much of this idea and the myths about it are built up over the course of the film which also seems to get increasingly haunting in the process. Joseph is later joined by an acquaintance he made back home by the name of Sadie (Wendy Glenn) who also helps him into understanding his purpose and reason for being “initiated” 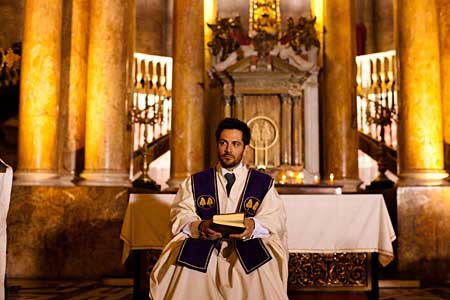 In all this is a pretty good film that offers some worthy scares along the way. The subject matter is of the deeper sort which takes an excellent stab at what has been written “today” on the concept. I will say that the ending was the payoff for me which you’ll just have to discover on your own viewing. Though the relationship between numerology and religion is a complicated and often times dark area that deserves more investigation. 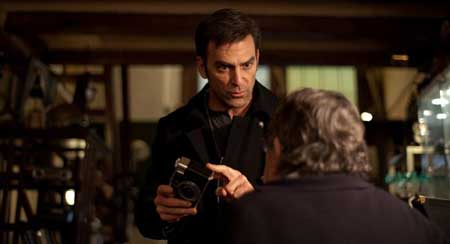 The clincher here is that the actual event itself is also occurring on the movie debut date making for a rather unsettling backdrop of wonder. 11.11.11 is a bit of a slow grind at first but stays with the format of a more classical directing approach. Most folks will expect one thing over the other but while 11:11 is a standalone concept it does make a worthy  attempt at marrying it to religion and the things we don’t understand. If the subject itself is at all of interest, I would point you in the direction of the book 11:11 The Time Prompt Phenomenon by Marie D. Jones and Larry Flaxman. You’ll find some great connections in this read that explain what has occurred so far in relation to the phenomena. 11.11.11 is a powerful film that succeeds in capturing the essence of 11:11 and does so while provide a pretty entertaining foundation.