Top 10 Movies that Scared the Hell Out of Me

I realize that different things scare different people. I am scared to death of clowns, monkeys, and robots (God help me if I am ever attacked by a robot dressed like a clown that has a pet monkey with it, while these things may not bother anyone else in the least little bit. The same thing can be said about movies. I know a lot of people who were really freaked out by “The Blair Witch Project” and “The Ring.” I was fazed by either one and thought that both of them were actually quite boring. By the same token, some of the movies that I find terrifying may have no effect at all on others. Keeping all of this in mind, I present to you the top ten horror film scenes that have personally scared the living sh*t out of me that the rest of you may think is lame as hell. Without further ado let’s get on with it…

10. The Beast Within
I watched this on satellite (one of the huge eyesore ones that looked like they could be used to communicate with aliens that people had back in the 80’s, not the small Direct TV kind) when I was in the 5th grade and it scared the living sh*t out of me. The thought of someone turning into a monster always bothered me, and the final transformation scene (that goes on forever) when the main character becomes a hideous monster made me have nightmares for most of my preteen years. I watched it recently and it wasn’t nearly as scary as I remembered it, but when I was ten it was the scariest thing ever. 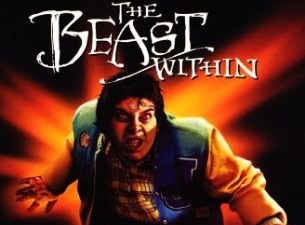 9. A Nightmare on Elm Street
On Christmas eve of 1986 my dad came in and announced that he had bought a gift for the entire Martin family, and that gift turned out to be a VCR. My mom, sister, and me were thrilled beyond the telling of it that we finally had a VCR and we all loaded into the car and made out way to the local pharmacy to rent movies (hey, it was the 80’s! Everyone rented movies then!). One of the movies that we picked up was “A Nightmare on Elm Street” and I remember being terrified the entire time we were watching it. Freddy was hardcore back then, not the silly ass comedian who spouted cheesy puns and one-liners he eventually became in the later films, and more importantly, he was scary as hell (the first death scene-where he kills Tina-scarred me for life). I remember laying in bed that night afraid to stay awake (because I couldn’t stop thinking about the movie) and afraid to go to sleep (because I was terrified Freddy would get me). A true horror classic that scared the living piss out of many, many people back in its day.

8. Friday the 13th Part 6: Jason Lives
I had seen Friday the 13th 1-5 by the time I was 12 and while I liked them, none of them really succeeded in scaring me. That all changed when I saw the sixth installment of the series and was introduced to “Zombie Jason.” He was stronger. He was tougher. Bullets did nothing to him. Most importantly, it seemed to nothing could stop him. I remember after watching it that my dad had to go to work that night, leaving me, my mom, and my sister all alone to be hacked to pieces by Jason. Like Freddy, Jason became sort of a joke in his later years, but this movie is living proof that he was actually scary at one point. 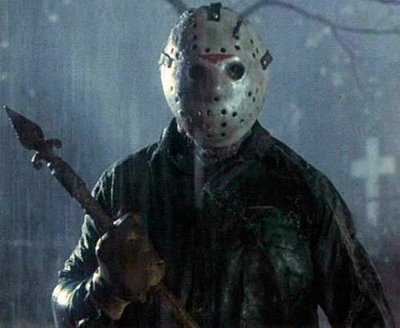 7. Halloween
What kind of horror fan would I be if I left this off the list? My favorite uncle (who is one of the people responsible for my love of horror) saw it in theaters during its original run and talked about it all the time. He said that it was a masterpiece and told me that I had to see it. When I was about six it was on network television for the first time and my uncle called and encouraged me to watch it. It scared the sh*t out of me, but I loved every minute of it. At school the next day everyone was talking about it (well, the ones brave enough to have dared watch it, anyway). This is my wife’s favorite movie of all time and even though I have seen it well over 100 times it never gets old (and is still genuinely creepy). 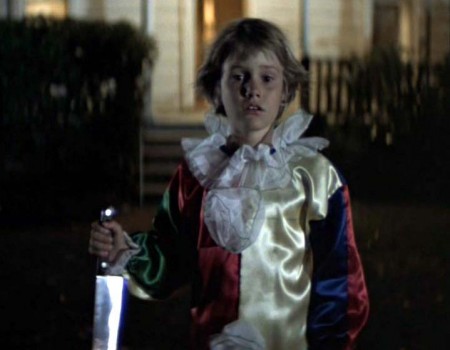 6. Deadly Friend
Yes, I know that most people hate it and are thinking Why the hell did this moron rank it above Nightmare on Elm Street, Friday the 13th, and Halloween? Well, as I stated earlier I have always had a phobia of robots, and as such this movie really, really freaked me out when I was younger. The way Kristy Swanson walks, moves, and talks after she and BB the robot become one still terrifies me to this day. The film just has an overall creepy feel to it (the score helps) and there are several scenes that make me feel very uncomfortable (the bit where the mean old bitch across the street sees Swanson look out of the window at her will always give me the wiggins, the very last scene actually made me jump and I had nightmares for weeks after seeing the movie trailer for the first time (but I knew I had to see it as soon as I could). I know that this movie wasn’t well-received but I always loved it, mainly because it did succeed in scaring me. Sometimes even now when I think about it I give myself the creeps. Honestly. Stop laughing at me… 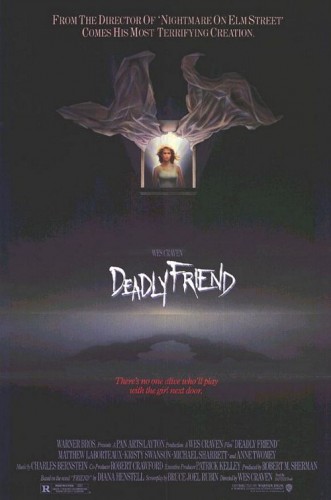 5. The Howling
I love werewolves, and have seen a ton of werewolf movies, but in my opinion this is the best one ever made (when I told Dee Wallace that a few years ago when I met her I thought she was going to cry she was so touched by my comment). It is just a scary film in general and a lot of scenes really bothered me when I first saw it at the tender age of eight, but one scene in particular really stands out. I’m talking about the excellent scene where Eddie Quist (played by the great Robert Picardo) transforms into a werewolf in front of the terrified Karen (the lovely and very nice Dee Wallace). The scene goes on for a while and is just awesome. We hear bones cracking. We see skin stretching. Quist’s eyes change (probably what bothered me the most), and his face starts to change into that of a wolf’s. Awesome and terrifying at the same time, I wanted to look away but I just couldn’t. After watching the movie that night my dad told me to go out behind the garage and get some firewood for the wood stove and I was scared to death that I was going to come face-to-face with Eddie Quist in werewolf form before I got back inside. 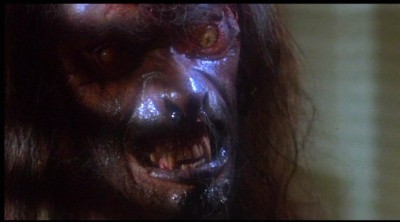 4. Demons
There was a kid that I knew that went to my school that watched this movie before I did and afterward he was so scared by it that he couldn’t eat or sleep He couldn’t stop thinking about it and he was so frightened by it that he wouldn’t go to the bathroom by himself (or anywhere else) and when he did finally get to sleep at night he would often wake up screaming because of the nightmares that he had about the movie. It got so bad that he eventually had to go see a doctor to help him get over it. Now that is what I call a hardcore horror flick. After hearing about this kid I HAD to see the movie and while it didn’t scare me as quite as bad as it did him, it is without a doubt a pretty scary little movie. The scene where the hooker transforms into a demon in the bathroom is without a doubt one of the scariest moments of the film (and believe me when I say that there are a lot of scary moments). I remember going to see “Nightmare on Elm Street 3” at a movie theater not long after seeing “Demons” and I was a little worried that I was going to get trapped inside the theater with a bunch of demons. Great little flick that holds up pretty damn well.

3. The Exorcist 3
The movie is creepy and has a very unsettling vibe about it, but the one scene that will always stick with me is when the night nurse is killed. I don’t want to ruin it for those of you who haven’t seen it, but let’s just say that it really stays with you after you see it. 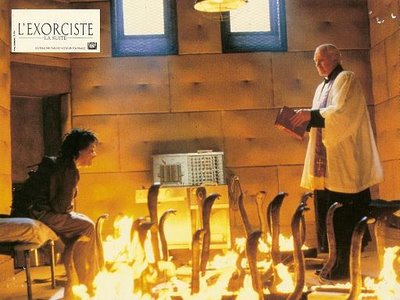 2. Ju-on : The Grudge
Never in a million years did I think that this movie would bother me. I was in my early thirties when I first saw it and I thought that while it would most likely be a good film, there was no way it hell it would scare me. I was wrong. The movie is filled with dozens of creepy ass scenes that scared the piss out of me, and I am grateful since it was the first film to do just that in a very long time. Hell, even the Americanized remake bothered me when I saw it, and it is a PG-13 film! I don’t exactly know why, but something about these films touch a nerve and Kayako is probably one of the scariest characters to ever appear in a horror film. 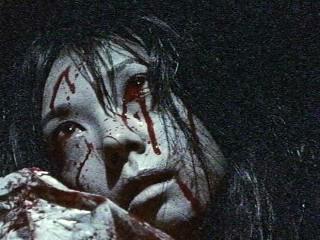 1.The Exorcist
To this day this movie scares me more than any other movie has ever done. Just something about it terrifies me and I honestly don’t think anything will ever top it in terms of freaking me out. I saw it back in 2000 when it was re-released in theaters with the added footage, and the “Spider-Walk” scene instantly became the scariest thing that I had ever seen in my life. This movie has traumatized countless people, and no matter how many times I watch it it still continues to send chills down my spine. In my opinion this is the scariest movie ever made, and I know that there are a lot of people out there who would agree with me. Let’s hope that it is never remade. 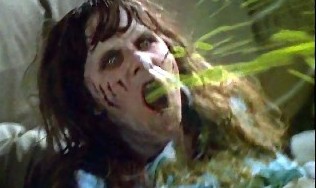 There you have it folks. Feel free to agree or disagree. I’m sure some of you are wondering why some of these movies are on my list and why others aren’t, but like I said this is my personal list and what bothers me may not scare you (and vice versa). Enjoy the list, and feel free to share with me what movies personally scare the sh*t out of you as well.

Top Ten Movies that Scared the Hell Out of Me