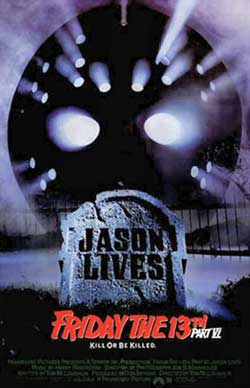 As a child, Tommy (Thom Mathews) killed Jason Voorhees, the demented serial killer whose exploits landed many a corpse at the bottom of Crystal Lake. Years later, Tommy is losing sleep over a nagging question: Is Jason really dead? When Tommy and a friend visit the cemetery to dig up the murderer’s grave, they find a well-rested Jason ready to spill blood again. Rocker Alice Cooper sings the title tune, “He’s Back (The Man Behind the Mask).”

“Your all gonna die,” said crazy Ralph. That crazy old man was right on for this film. Friday the 13th: Jason Lives will surely give every gore-hound, Jason-fanatic, and slasher film lover a run for their money. Jason is finally back! Were glad to say that after Part 5, which only had the copycat killer and not the true Jason Voorhees. With 18 kills and Tommy Jarvis back in the picture, grab some popcorn and get ready to see some dismemberment and teenage sex.

Friday the 13th was planned to end by the 4th film and having Jason Voorhees finally killed off. Oh the fans knew that would never sit after A New Beginning gave them only a taste of Jason’s return. Jason Lives takes the series and revitalized it in a perfect film, that just goes on a decline since this peak.

This film starts with Tommy Jarvis looking to exact revenge on Jason’s corpse. Little does he know Jason doesn’t die. After he stabs his body with a metal spike he leaves it in Jason stupidly. Then lightning hits him creating a Frankensteinish moment for us to remember as he finally wakes from his slumber. Doesn’t take long for him to start his rampage as his first kill happens just as he wakes up. Making me a happy camper seeing killing right off the bat, makes me know it was a special Friday the 13th.

What this film really does good on portraying is that Jason isn’t a man anymore, but a worm ridden, superhuman zombie. Tommy also switches gears in this movie as well, from an quiet shy boy to an outspoken badass.

Jason finally finds his way back to Camp Crystal Lake to only find a new batch of teenagers on their summer getaway. This film did a beautiful job in showing daytime killing is fine as well. Now implementing kids into the camp as the counselors watch over them was a bold yet well executed step as well.

Tom McLoughlin put together a Tommy Jarvis that fans want to see. Jason the villain needs a hero to combat and it sure the hell wasn’t going to be a bookworm Jarvis. The kills are top notch as well, there are some before and after kills. Even some murders are done more than one at a time.

As a Friday fanatic myself, we all know this is archive as in top 3 best of the series. With some ” that could never happen” kills and 80’s rock atmosphere to this film it makes a scary and exciting thrill-ride.
They also land Alice Cooper to use this film as a backdrop from his “Man behind the mask” music video.

The ending starts with the iconic duo Jason and Tommy facing off finally to exact his revenge. With the film taking a turn to lakeside as Tom rows out into the lake to save his girl from Jason and to end the nightmare once and for all. Jason staggers into the lake and submerges himself, to show no sign of coming up. After the attempt of oil and water to coax him out, it ends with Tommy coming out on top. Jason sinks to bottom of lake with a chain around his neck and weight holding him down.

It ends on a very strong note. The villain was now at the bottom of the same lake where he drown so many years ago. The hero has won the day, and Tommy get’s to walk off with his girl and never going to see Jason again. That couldn’t be ever so wrong, with an ending hinting of another sequel. He will rise again and regain his legacy as the killer of Camp Crystal Lake.

This movie is the last respectable Friday the 13th with an excellent cast, atmosphere, and overall experience. Last comments I got to make on the movie are that it should have been more like this. The films to follow are decent but none are quite up to par with this one. Hope you enjoy this one as much as I did! It’s Getting my killer.