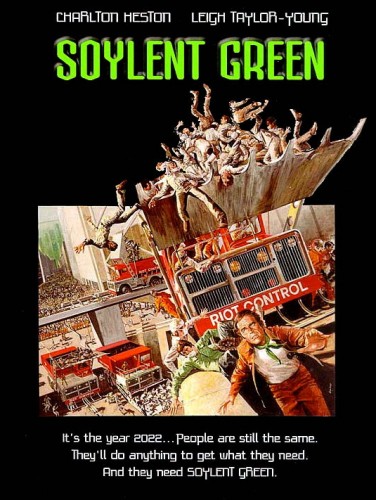 “In the year 2022, overpopulation and the greenhouse effect have made life extremely difficult for the majority of people. The population of New York City is 40 million and the constant heat is unbearable. The city’s infrastructure has broken down. Water is rationed and fresh food is virtually non-existent. Rather, most of the population live on soylent green, made from ocean vegetation and formed into tasteless green wafers. In this environment Detective Robert Thorn is assigned to investigate the death of William Simonson who was ultra-rich and didn’t suffer any of life’s hardships. He was killed with a blow to the head and it was all made to look like an interrupted break-in but Thorn is convinced early on that it was an assassination. Thorn learns that Simonson was a member of the Board of the Soylent Corporation but had recently become sad and morose. What, Thorn wonders would make such a rich man unhappy.” (courtesy IMDB)

One of the best films ever to deal with overpopulation is Soylent Green (1973) directed by Richard Fleischer, whose previous genre efforts include the classics 20,000 Leagues Under The Sea (1954), Fantastic Voyage (1966) and Doctor Dolittle (1967). Following genre efforts were not so classic: Amityville 3-D (1983), Conan The Destroyer (1984) and Red Sonja (1985). Soylent Green was based on the novel Make Room! Make Room! by one of science fiction’s most successful authors, Harry Harrison. The novel itself is primarily a grim warning about what will happen if the problem of overpopulation is ignored and the rampant exploitation of Earth’s dwindling resources continues unabated. As such it’s an exercise in futility and despair – the world Harrison describes is past saving and we can only watch as civilisation goes down the toilet. 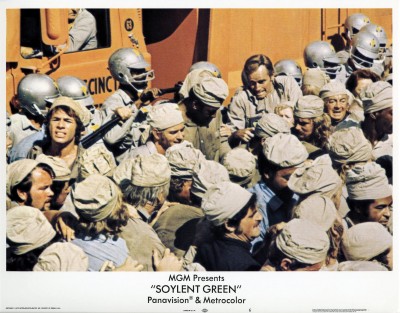 The basic plot of the novel concerns a New York detective named Thorn who is assigned to investigate to the murder of a racketeer, once his corrupt superiors decide it’s the work of an out-of-town conspiracy. Thorn struggles to track down the murderer while at the same time having to cope with all his other duties in the overcrowded New York of 1999 where the population has reached twenty-one million and the city’s facilities are collapsing under the strain. He becomes involved with the late racketeer’s mistress Shirl, who moves into Thorn’s small two-room apartment which he already shares with his friend Sol, over seventy years old, who remembers a time when things were different and so much better. 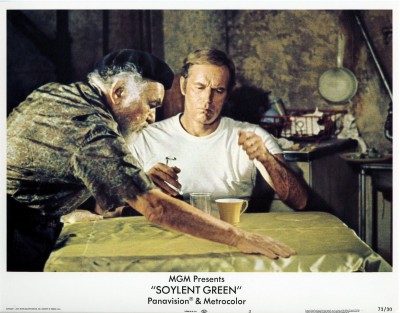 For a time all three are as happy as anyone could be under the circumstances, but then Sol contracts pneumonia after being injured in an old people’s demonstration and passes away. His room is taken over by a large obnoxious family and the pressure of having to live with them forces Shirl to leave. Thorn succeeds in finding the murderer which turns out to be a frightened teenager who had killed the racketeer in a moment of panic when discovered while robbing an apartment. Thorn is forced to shoot him dead, an act which gets him into trouble with his superiors who have already forgotten about their conspiracy theory. The book ends with Thorn demoted to uniformed policeman again and completely alone, yet still determined to do what he can to preserve what remains of the law and order. His refusal to give in, no matter how bad things become is the only positive note in the book’s closing description of a city where the food and water rationing is reaching the point where it will barely support human life and the rioting is becoming more violent and widespread. Despite the efforts of Thorn and others like him, the suggestion is that the end is near. 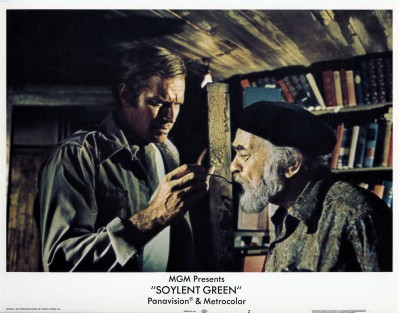 Scripted by Stanley R. Greenberg, the film preserved much of the grimness of the future New York, now set in the year 2022, but made the foreground action determinedly upbeat and action-filled. For one thing, Shirl (Leigh Taylor-Young) doesn’t have to experience the squalor of Thorn’s (Charlton Heston) apartment – in the film she is classified as ‘furniture’ and therefore goes with the apartment – and consequentially remains in love with Thorn. Nor does the film Sol (Edward G. Robinson) die in his bed. Instead he signs himself into a suicide parlour and dies a pleasant death surrounded by cinemascope images of vanished earthly pleasures such as fields of flowers, bubbling brooks and clean beaches. 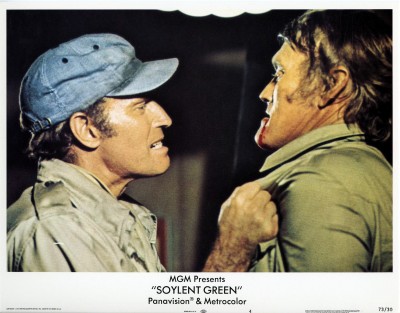 But the major change involves the non-existent conspiracy plot in the novel. In the film it becomes a real conspiracy to cover up the true nature of soylent green, the world’s most abundant form of artificial food supposedly made from soya and lentil beans. The racketeer in the book becomes, in the film, a government official (Joseph Cotten) who is killed because his colleagues fear that the guilt and remorse he feels over his connection with the manufacture of soylent green will cause him to reveal publicly the truth. Sol, who works as Thorn’s police researcher in the film, uncovers the secret, and it’s this that causes him to register for suicide. He passes the information onto Thorn before he dies, but the detective doesn’t believe him until he sneaks into the soylent plant and sees dead human bodies being converted into food. The film ends with Thorn badly wounded after a fight with a hired killer and being carried away shouting, “Soylent green is people!” The audience is left to decide for themselves whether he will be believed by anyone, so the ending is somewhat ambiguous. 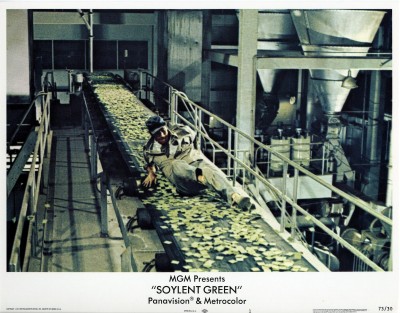 I had the opportunity to ask Mr. Harrison his opinion on the adaptation when I made his acquaintance at the 1985 Melbourne World Science Fiction Convention: “I heard later that it was all Heston’s doing that the film ever got made. He’d read the book and had been trying for five years to set it up. He got the producer, Walter Seltzer, involved in the project early on as well and they both kept trying. The size of the budget was one of the problems. it was almost four million dollars, and MGM, the studio they were both working for, would not do it. But they persisted. They invested a good deal of their own money and had a screenplay written and drawings made, but the MGM chiefs kept saying that they didn’t think the subject of overpopulation was important enough. So when they came up with the plot-twist of cannibalism, MGM finally decided it was a viable theme for a film – which gives you some idea of how the film industry thinks!” 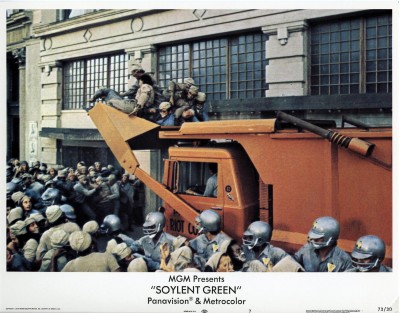 My, how things have changed! And it’s with that thought in mind I’ll now bid you goodnight and farewell until we meet again to grope blindly around the bear-trap known as Hollywood for next week’s star-spangled celluloid stinker for…Horror News! Toodles! 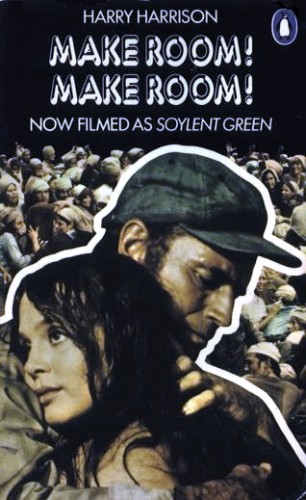