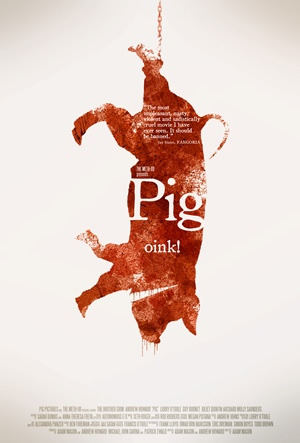 A deranged psychotic spends his summer day deciding how to deal with the three captives he has chained up on his land. With only his own troubled mind and his dim-witted companion available to guide him and the fate of his victims, the disturbed man makes violent choice after violent choice. No one is safe and no taboo is left unbroken.

Adam Mason directs Pig simulating a single shot for the majority of its running time. The entire story takes place in “real time” as the camera follows the demented cast from set piece to set piece, plotted out within a limited stretch of land and a makeshift campground. The entire focus is on the lead character played by Andrew Howard. Howard’s performance is insane and frightening. With the camera focused on him for the full length of the film, the story is more of a character study of the despicable human being he is than a slasher film. He is sadistic, mean, brutal and disturbed. It is a fascinating performance and one of the film’s only redeeming qualities. Another is the style chosen to film this beast of a film: the single shot, the staged practical effects, the transitions as the camera follows one character to the next scene, it’s blatant intensity. However, the story itself is an abomination, sick and unpleasant. While it is a character study, it never does anything remarkable with that character except illustrate how messed up he is. There’s no hint at motivation, no clue to cause and effect, no sense of redemption or remorse. There’s just him being ruthless, cold, cruel and perverted. Without a point, the film is just an exorcise in torture, bordering on snuff.

The film’s saving grace is Andrew Howard. His performance is mesmerising – no matter how hard you want to look away, he draws you in. Considering the presentation of a single shot film, the idea that he is able to stay in this character so exact and so precise and so singularly for the entirety of the film is remarkable – and chilling. His character is the sickest, most vile individual on the planet. And somehow, Howard brings him to life in every single frame. His performance is physical and demanding to the point is seriously questions the damage it may inflict on his psyche. There is no fantasy here. No Jason. No Freddy. No Michael. Not even Leatherface. This is pure evil: damaged, deranged and demented.

The film starts off with Howard’s truck approaching a blood-soaked woman who quickly becomes re-captured and thrown back into the truck. Without any transition, the film follows the driver back to his camp where he brutally beats and strangles the girl while her friend, chained not far away, watches in horror. For the next 80 minutes, the camera follows this sick bastard from heinous act to horrendous, unthinkable, unspeakable deed: shootings, beatings, cannibalism, rape. There is very little else to the plot. There is very little dialog besides Howard’s mental rantings and ramblings and the sound of a radio program broadcast over his radio. The day-in-the-life approach is interesting at first, but quickly it reveals it has nowhere to go. It has nothing more to do than to shock. While it is unrelenting and disturbing, the film fails to do anything with its innovative set up.

Technically, the film is amazing. It is an achievement to present such terrible things in a cleverly edited single shot. The ability of the actors to stay in character and on cue. The director never tripping up or missing his shot. The camera brilliantly following an escaped victim to a new location, only to reveal Howard’s killer not far behind or waiting for them at their journey’s end. Then to only return back to the central location next to the run down trailer. The result cannot be denied. The landscape is broad and open, yet it is as claustrophobic as a closed room. The film is surprising in that way, finding a way to introduce another unbelievable location just around the next corner or just over the nearby hill. There are horrors everywhere. Escape is futile. The camera slickly moves in for close ups or pans out for revealing wide shots – all from a single camera. It is remarkable.

Pig is just an angry film which leaves the viewer wondering “what did I just see” and “what is this all about.” It is insulting and disturbed – just wrong on every level. While the acting is intense and the camerawork is noteworthy, the story itself is just unpleasant and sick and pointless. What’s worse, that appears to be idea behind Pig, to disgust the viewer, to challenge their morals and values. It sets out to revolt the viewer, to make them feel dirty and vile for just watching. That it can achieve this with a handful of actors, minimal story and a series of gruesome actions is a feat in and of itself. But that doesn’t necessarily mean it is a good thing. Pig is film that is difficult to recommend on any level; however, it leaves a indelible impression that will stick with the viewer for a long time – too long. Proceed with caution, you have been warned. 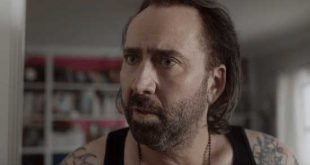 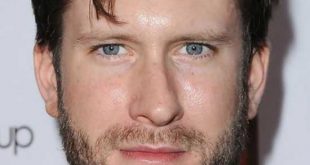