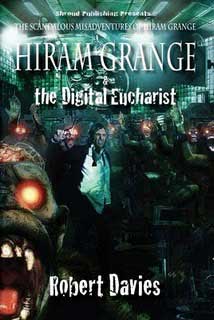 Three is a magic number. Trilogies have a feeling of wholeness to them and then there’s that “third time’s the charm” thing. The third outing is also the one that solidifies a series. Three tells us, the readers, that these characters and this world are not ephemeral wisps to blow away at the slightest whim, that their creators mean business. Three is also where the mythology is solidified, the point by which the expectations for the series are established. The third book is the keystone on which the whole future of the series is based and The Digital Eucharist cements an already impressive foundation for the house of Hiram.

Years ago, Hiram imprisoned a right bastard of a demon at the cost of a life of one person and the leg of another. Now, it seems that same demon is using the rising Occlusionist movement and the mind-control capabilities of their digital eucharist to stage its big comeback. Can our intrepid ball of bitterness, misanthropy and regret kill the demon and save the world? Do people do strange and violent things in the name of Jodie Foster?

Robert Davies has some mighty big shoes to step into with his foray into Grangeland, but he is more than up to the task. His writing is more than just prose, more than words strung into sentences woven into ideas. More akin to poetry, his words ooze into one another, vibrating with beauty and horror in the dank pits of excavated body cavities. Look at the following line: “It was merely a bandage over a festering wound, and the quality of the band-aid could do little to stem the slow, certain rise of pus and stinking odor of sickness that rose from the cold, sterile streets.” Digital Eucharist is positively rife with this kind of striking imagery that sings across the tongue. His style quite fondly reminds me of Choir of Ill Children-era Tom Piccirilli, a type of magick spun in ink across the page.

The story itself may lack the gonzo, balls to the wall, what-the-hell-just-happened sort of craziness present in the first 2 books, but it is by no means safe. The conventionality of the tale is used to its advantage, painting a picture of a man for whom this kind of sh*t is an everyday thing. Sure, this may be a particularly rough day at work, but it is still another day at work. Shroud took a risk giving this project to different authors, providing them only with the core mythology before letting them loose and I think it is paying off here. By this point, each book has differed enough for the heart and mind of it own creator to shine through, yet has maintained the core of Hiram and the world he inhabits. The results are becoming something akin to the oral tradition in the same way as what has been done with Ed Lee’s vision of hell or Gerard Houarner and Gak’s cuddly creation, Dead Cat.

The cover and interior work by Malcolm McClinton, always a special treat, is the finest I have seen from him up to this point. Of course, this opinion may be based on the presence of much more ooppy-glooppies and rotting, dropping bits of flesh. That’s how I like my art. The point is that he is still kicking ass with those and they provide nearly as much of a reason to buy the books as the stories. I’m hoping he’ll be at context this year to avail me of some of my hard earned cash in the procuring of prints (that’s a hint there, laddy).

Hiram Grange and the Digital Eucharist has officially marked Hiram grange as a hell of a brand for Shroud, one that they have every reason to be proud of. I laughed, I gagged, I touched myself in an inappropriate manner. In other words, I had fun.

As a small side note, this book on its own, with Davies’ obvious opinions on our obsession with technology, makes for an interesting counterpoint to Rio Youers’ Mama Fish (also published by Shroud).