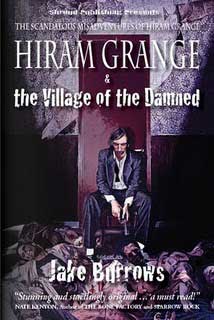 “He struggled to escape from the scores of tiny ceramic hands that held him in place, but failed. He looked around in vain for his trusty Webley, but no luck. All Hiram could do was helplessly watch as the heavy sledge dropped towards his head and marvel at the absurdity of his current plight.

As ridiculous a notion as it might be, he really was about o die at the hands of a walking corpse and her army of malevolent garden gnomes…”

After a year’s worth of advertising pummel, ranging from nebulous “Who is Hiram Grange?” bookmarkers up to an entire issue of their magazine dedicated to the drunken ball of self-destructive tendencies, we finally get to meet Shroud’s posterboy for the end of the world. Was it worth the wait and all the hype? I don’t know about that, but I’m glad I dropped the 8 bucks.

Meet Hiram. He’s a bit emotionally perturbed, a product of an upbringing that would’ve sent many screaming and gibbering into the bowels of their own sanity. An anachronism that could only exist in post-millenial America, a man so tied to his past that he literally wears it at all times. A drunk and a drug addict, with a preference for absinthe, opium and the occasional company of a decent whore. Far too often, He’s the only thing between us an utter destruction.

Trust me, he’s no happier about the arrangement than anyone else.

In the quiet little coastal burg of Great Bay, some damn fool has awoken a great evil. A great evil that wants nothing more than the destruction of all humanity. A great evil wielding the power of the ten biblical plagues. A great evil that has taken possession of the body of the local busybody and self-righteous twat, Junebug, as well as her army of ceramic garden gnomes. Enter H.G.

I admit to being skeptical, at the very least, regarding this series. I remember thinking that the premise of Hiram (a drunken letch fighting Lovecraftian evil like a noir superhero) sounded a tad schticky. But, like anything else, the truth comes in how the character is drawn and I was quite pleasantly surprised here. Jake Burrows has given a potential caricature depth and an accessible emotional center that I did not expect. Sure, Hiram is perpetually wasted and a total waste, someone few people would ever wish to bump up against, let alone actually know but we see the source of this in world where he has experienced nothing but chaos and destruction. Who, in that situation, would not grasp onto any buoy of warmth and comfort, regardless of how feeble and insubstantial it may be?

The reason this story works, why it doesn’t collapse into complete slapstick of Evil Dead proportions, lies in Burrow’s ability to take it 100% serious. Look back at the opening quote and then picture it coming in at the tail end of one of the more tense and taught openings to a horror novel I have read in a long time. Think of your favorite Monty Python sketch, if it was written by Hubert Selby, Jr. and you are getting close. This is someone who sees the hilarity, horror and tragedy in the absurd. Someone who knows that paralyzing, gut-busting laughter isn’t that far removed from gibbering and chuckling, curled into an empty-eyed ball in the corner of a padded cell. This knowledge elevates the tale into a powerful, moving and freaky ass piece of art.

A great case in point here is the short scene involving arthritis, a world-renowned cellist and the reason for the useless shell permanently lodged in Hiram’s trusty Webley revolver. Or the first time Junebug comes home after her recent revival, stinking up the house and leaking embalming fluid onto the floor. Or the frog diarrhea.

Then there is the cover art and interior paintings by  Malcolm McClinton. In these stark, simple images, he manages to perfectly capture the frailty and pathos that drives Hiram in the face of the utter insanity of the moment. The addition of illustrations like these is what has put Shroud to the forefront of my mind when it comes to small press releases, second only to some of the better releases by Necro. Art like this makes it much easier to justify the added cost that comes with any small press purchase.

Still, something is bugging me. I was a tad disappointed with the Deus Ex Machina (quite literal at one point) that swoops in to save Hiram in his moments of direst need. Generally, Hiram is made out to be the kind of guy that has no choice but to take care of his own problems and to drag himself from the edge of the abyss by the last remaining shreds of his own ragged fingernails. Yet, he is saved TWICE by the invisible hand of fate, the same hand that has shat all over his life at any other given opportunity. It isn’t a story destroyer, but it did come across as a tad cheap.

Come the bright, unwavering light of dawn, H.G. and the VotD made for a damn fine and totally entertaining read that moved me in unexpected ways. I can’t wait to find out what lies in store for our intrepid anti-hero once he washes the puke out of his hair.