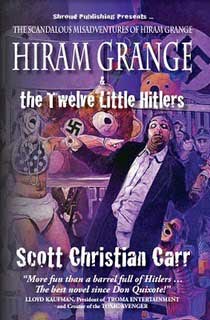 “Wiping Jesus’ blood on his pants, Hiram stands up. Retrieves the Webley with his good arm.
Takes Aim.
BLAM!
Another Hitler down. And a Jesus to boot.
On one of the laptop computers, Hitler’s blog reads:
What good fortune for governments that the people do not think.”

That’s just about it.

Maybe “Holy Shit!” would be better, but I’m a bit too blown now to be sure.
Without a doubt, the second installment of Shroud’s Scandalous Adventures of Hiram Grange has cemented the growing reputation of the series as well as my own opinion. This isn’t just a series of books; it’s a force to be reckoned with, quite possible feared, by a world quivering in its wake. In other words, I kinda liked it.
At this point, if you are unfamiliar with Hiram Grange, I would like to direct you back to my review of Hiram Grange and the Village of the Damned. It isn’t necessary to read that one first, but everything makes a whole lot more sense if you do.

Onward and downward we go…

As the title would suggest, this book is centered around 12 clones of an almost universally reviled, singularly moustachioed little man. Kinda. It is also about our dear, dear wretch Hiram’s hunt for those mini Fascists. But not entirely. Really, this book is about drugs, personal collapse and a slow, steady whirl down the drain of life. Where Village… focused on Hiram as a broken man, concerning itself with the why’s and whereto for’s of his breaking, this book focuses on Hiram as an addict, concerning itself with his decline into The Binge and the consumption of his life. How can we ever hope to be saved by this drooling, stinking remnant of a human being?

I must admit that Scott Christian Carr (who also happened to write one of my favorite stories from the anthology Sick) has balls. Big, hairy, hyper-inflated balls that he doesn’t mind showing off at every opportunity. Anyone who is willing to throw the attack on the Twin Towers and baby tentacle-rape (don’t run away yet, the baby in question is Hitler) at the reader in the friggin prologue has to. He doesn’t hold back anything and the effect is tremendous. You know, without a doubt, by 7 pages in, that nothing and noone is safe from this man and his horrific dreams where laughter is mixed with blood-tainted vomit.

The cool thing is that his talent is even larger (maybe he keeps it warm and cozy in those mammoth testosterine sacks). What I am coming to adore about Hiram is his fragility, the simple realization that this is the last person anyone would want to depend on for their salvation. It makes him more human, more real to me. Within these pages, Scott shows us Hiram at his most vulnerable. An incredibly weak, insecure and utterly shattered person upon whom a practically unbearable weight is placed and he simply cannot face it all. So he dives face first into any drug he can get into himself, begging for the oblivion his mother chased and eventually found staring down the barrel of his Webly. In anyone else’s hands the pathetic fallacy in which Hiram mental state is regularly reflected in the music playing wherever he went could very well come across as a cheap, clumsy and ineffective trick, but he handles it with such grace and subtlety that it is nothing less than magic.
There is something else that I REALLY want to mention, almost to the point of blowing out my anus, but I’d hate to spoil it for you.
The marvelous cover and interior artwork by Malcolm McClinton that has become, in my mind, inseparable from H.G., is once again present. This time out, the images are slightly skewed, twisted and stretched in a way that reflects Hiram’s state of mind quite nicely. I should also mention the often unremarked upon woodblock illustrations of Mr. Danny Evarts, something ubiquitous with Shroud publications. Slight and unobtrusive, as they should be, but always placed in a way that adds to the writer’s work without drawing attention to themselves.
Wrapup: Hiram Grange and the 12 Little Hitlers is funny as hell, emotionally brutal, intellectually intriguing and more than a bit f*cked up. Once more with feeling: Holy Shit!