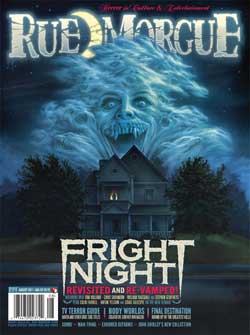 It looks like a FrightNight wave coming up! Sporting that unforgettable original artwork, Rue Morgue is gearing up as well. It seems early influential films leave a strong residue on us hardened older genre fans. Tom Holland is on board in an exclusive interview about his work on Fright Night. This iconic film gone remake also meets with a few new faces from the 2011 version….Colin Farrell, Anton Yelchin and new director Craig Gillespie.

Lots of news shaping up. Now the cool thing I’ve always loved is the early ads which announce not 1 but a hand full of titles. With Halloween 2 months away, its not surprising. For us sites and mags, that means alot of reviews coming soon.

On other notes, Behind the Mask, Glosserman tells us about his Facebook campaign to raise new funds. Are you kidding me? ‘Cmon world, his first film kicked ass, and now he’s struggling to make a sequel. Some things wrong here, seriously wrong…… Which studio made the mistake of letting his follow-up slip thru their hands? Well, we know there’s another on its way, how it gets to us is secondary to the fact that it will.

Soska Sisters and others report on the wave of banned films, boycotts and hardships that filmmakers face these days. Human Centipede among other suffers under the weight of the man, but as we know. Horror will find a way.

Haven, that odd little series initialized by Stephen Kind preps for it’s 2nd season. “Troubles” they call it, those odd powers that infiltrate each episode with something strange and unique. Based on the “Colorado Kid” this series overview gives us exactly that for those who haven’t taken the plunge.

“Fear the Reaper” preps us for the latest effort from the Final Destination franchise. Here we have a small tribute to a few of the bigger kill scenes within the films. Whether you are a fan or not, you have to admit a certain inventiveness in the way things things roll out.

.I love a good horror TV list, especially when I’m alerted to shows to watch out for. This summer list to watch is no exception with a few very promising series on route to look out for. High on my list of course is the “Walking Dead” season 2, though it’s the newcomers who I’ll be scheduling in. Titles such as “Grimm”, “American Horror Story” and “Lost Girl” make for a nice little gaggle of material which I hope will be worthy. Ongoing favs set to S2 it are “Being Human”, True blood (S4)” and “Supernatural” (um season 7,8?…I forget. Now where’s “Fringe” on this list?

“Anatomy Divine” now here is something to see! Though not in magazine form, go out and see this at the museums. I believe I’ve gone to 2 of these showings and they are …quite the bizarre. Real dead people, sliced up, statued and posed in compromising positions. The dead never so much attention!
Hagens the founder and originator of the Body worlds exhibits has managed to delve into our curious subconscious with a display like no other. His use of what he calls “Plasticine” is something that needs to be seen to be believed. Quite a macabre exhibition full of surprise around every corner.

Ok, that’s the skinny on the main stuff, …..oh it looks like Rue is going Ebook and Nook, great to see them getting on with the times…now if that “other” noted horror mag could do the same….just saying, that’s all.