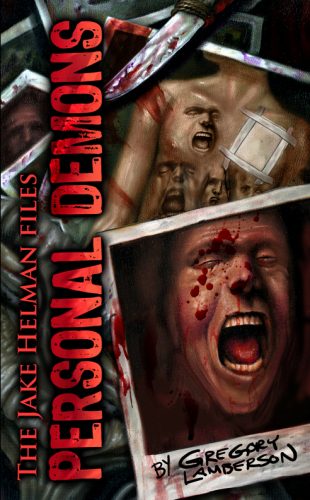 Medallion Press is offering Personal Demons, the first book in author and filmmaker Gregory Lamberson’s “The Jake Helman Files” occult detective series, as a free e-book available from all online retailers who sell it, including Amazon.com, Barnes and Noble.com, and Kobo Books.com, as well as Medallion’s own website. The special promotion runs from Monday, August 8th – August 22nd, and predates the October 1st publication of Cosmic Forces, the third book in the series.

“Greg is an amazing writing talent and all of us at Medallion Press are such huge fans of The Jake Helman series,” says Paul Ohlson, the director of marketing at Medallion. “This promotion is a chance for the rest of the world to experience what we know of Jake Helman – he’s one badass mofo!”

Personal Demons pits Helman – an ex-cop hoping to redeem himself and reclaim his life after battling a cocaine habit – against a billionaire geneticist, a serial killer who steals the souls of his victims, and the Biblical Cain and Abel. The novel won the Anubis Award for Horror and the IPPY Gold Medal for Horror, and spawned a sequel, Desperate Souls, which found Helman battling drug dealers who deploy an army of voodoo zombies. The first two novels are available in print and as e-books from Medallion, and as audio books from Audible.com.

“The books in this series are balls to the wall horror, but I mix in heavy doses of my other favorite genres, like crime drama and hardboiled noir,” says Lamberson, also known for his cult films Slime City and Slime City Massacre and his Bram Stoker Award nominated novel Johnny Gruesome. “I’m lucky to have a publisher like Medallion that supports where I’m taking the series and promotes it. Jake’s usually a lone gun, but in this respect he’s got a lot of backup. Hopefully readers will find the series addictive.”

In Cosmic Forces, Helman takes on a mythological creature named Avademe which has been controlling world affairs for centuries. Lamberson reports that the fourth book in the series, Tortured Spirits, has already been completed for October 2012 publication. He is currently writing The Frenzy War, his sequel to last year’s werewolf novel The Frenzy Way. After that, he hopes to begin work on his most ambitious project to date for Medallion, which he promises will be cutting edge in nature.