Home | THE WARD – hitting DVD in less than 2 weeks! 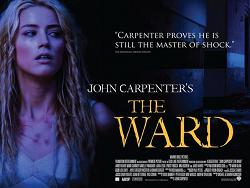 I knew it would be hitting, just didn’t expect it to be so soon but hey, that’s a good thing. THE WARD, John Carpenter’s latest will be heading to home video on Aug. 16th – that’s what – 10 days away. Wow, talk about a quick roll out.

No artwork or anything for you but with a release date so close I would think that would be forth coming any second.

Story line wise, here’s what we are looking at:

The film follows a young woman in a 1960s mental institution who becomes terrorized by malevolent unseen forces. Kristen, a beautiful but troubled young woman, finds herself bruised, cut, drugged with laughing gas. The other patients in the wardâ€”four equally disturbed young womenâ€”offer no answers, and Kristen quickly realizes things are not as they seem. The air is heavy with secrets, and at night, when the hospital is dark and foreboding, she hears strange and frightening sounds. It appears they are not alone. One-by-one, the other girls begin to disappear and Kristen must find a way out of this hellish place before she, too, becomes a victim. As she struggles to escape, she will uncover a truth far more dangerous and horrifying than anyone could have imagined.

The DVD will feature a commentary track by Carpenter.