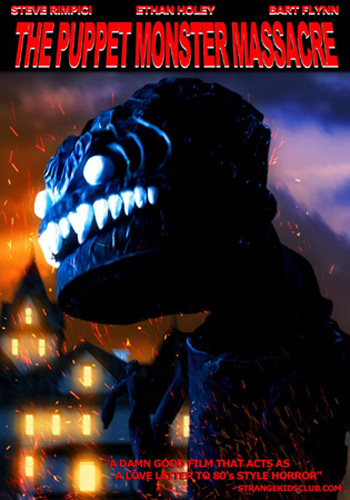 A group of teens are challenged to spend a night in the Wagner mansion on the edge of town. Little do they know the owner has concocted a monstrosity in the basement.

You know The Black Saint keeps an open mind to all manner of films that I review. I mean I don’t make any assumptions before I see a movie, I take every movie at face value until I see it. When I first caught word of “The Puppet Monster Massacre”, I told myself “Self, It’s about a bunch of foul mouthed puppets who are dying horribly, You MUST see it”. I trust myself implicitly so of course I made it a point to see this f*cker. I was pleasantly surprised indeed…

The plot of “PMM” eminded me a lot of “Mad Monster Party” and “House On Haunted Hill” (One of the characters even mentions “House On ..” in the movie). Five people are sent a letter inviting them to stay overnight in the dreaded Wagner mansion. If any one of them can make it through the evening they will win a million dollars. Run away, and forfeit the cash. The five chosen are Charlie (The “Hero”), Gwen (The “Girl he’s in love with but can’t tell her), Raimi (The movie geek who’s never had a woman), Iggy (The defiant punk rocker) & Mona (Iggy’s whorish lady friend). All of them arrive at the same time to the mansion except for Raimi who’s been waiting outside the mansion for a few hours since he really didn’t have much to do. 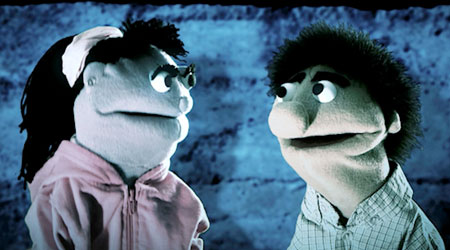 And who greets them? It’s Dr. Wolfgang Wagner! An evil scientist who was responsible for sending the invitations out, but he doesn’t plan on letting anyone survive the evening. Why does he want these five dead? How does he plan to kill them? Why does he have a torture room full of cute little bunnies? Will Raimi ever get laid? And what the heck is a penguin walking around killing people all about? Well all of the answers are waiting here for you to see & I think you’re missing a pretty good little movie if you don’t see it.

The script is fairly simple & it’s (Mostly) very funny as well. Some of the jokes fall flat & some of them go on too long but by and large it’s a pretty funny script & I laughed out loud a lot more than I thought I would. All of the voice performances are pretty funny as well but special mention has to be given to director Dustin Mills’ performance as Raimi (A nod to director Sam Raimi). It’s a perfect geeky voice with a slight slur to it that is easy to listen to. We all know someone like Raimi & that’s why his scenes are the ones that resonated with me the most. He reminded me of more than a few people I’ve met over the years, but that’s a good thing actually. I have fond memories of these people & Raimi’s actions took me back to when I met them.

Of course the filmmakers couldn’t call the movie “Puppet Monster Massacre” without a monster in it could they? Well there is a beastie in it & it’s pretty f*cking cool to look at. It reminded me of what you might get if you took the DNA of the Alien & the Zuni Fetish Doll from “Trilogy Of Terror. It’s actually pretty effective & while it didn’t scare me, I think it would DEFINITELY scare a youngster. But make no mistake, this is not a film for kids. The violence is graphic, the language would make a sailor blush & there are a few fairly graphic sex scenes in it as well just in case bad language & guts aren’t enough for you. Mona is quite the tramp & in addition to her two sex scenes she has a masturbation scene in a shower. Not for the young-uns in any way, shape or form. But lots of fun for us consenting adults. 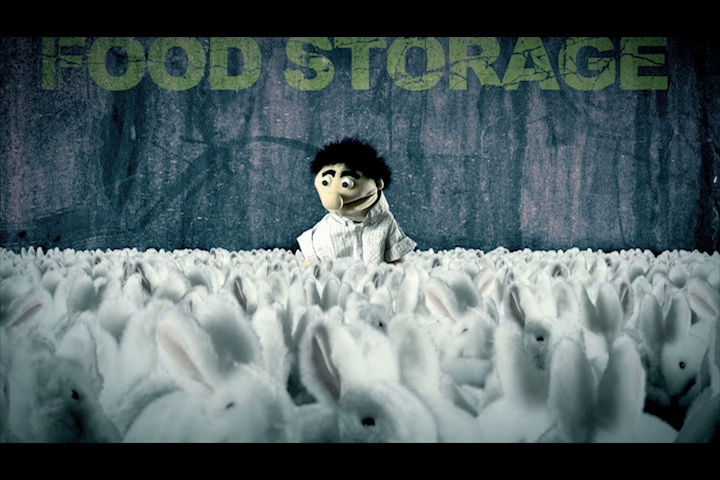 The look of the film is an amalgamation of “Sesame Street” style puppets integrated into some fairly cool CGI environments. The two go together very well actually & the film looks pretty good. All of the special effects are pretty spot on as well. Director Mills throws in all kinds of explosions, tanks, burning buildings & copious amounts of gore. All of it looks good despite what was (I’m fairly sure) a miniscule budget.

“The Puppet Monster Massacre” is a quick (70 minutes) shot of fun that any fan of the genre should enjoy. I thought it was a hoot & I’m giving it a solid 3 shrouds. I think if Mr. Mills & company gets a bit more money in the future he might have something everybody will be talking about. He is a talent to watch for sure. Just remember, it’s not for kids! Just because it has puppets in it instead of people doesn’t mean it’s child friendly people. Otherwise, rent or buy it (It’s available at Amazon.com) & have yourself a nice (Adult) evening watching puppets being slaughtered by a penguin & a monster! 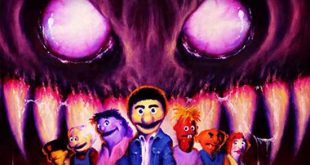