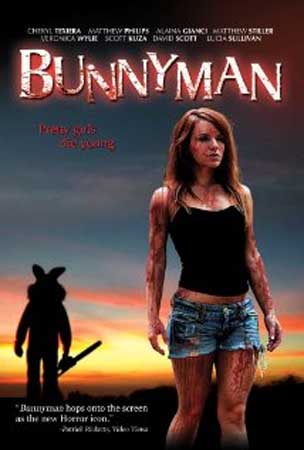 A cannibalistic family led by a disfigured man in a bunny suit, wreak havoc in the backwoods.

In 1974, director Tobe Hooper unleashed a film upon the world that would change the face of horror forever. Thirty seven years later, young filmmakers are still inspired by this film. There have been great films like Xavier Gans’ “Frontiers”, the mediocre (I know I may take some heat for this but..) “House of 1000 Corpses” (though I thought “The Devil’s Rejects” was a PERFECT movie), and the horrible “Texas Chainsaw Massacre” 2003 remake. When I sat down to watch “Bunnyman”, it’s apparent from the films’ opening scenes that this was another “TCM” clone. The opening scene felt much like the final scene in the original “TCM”. Does that make it a bad film? Did I dislike it? No, not at all. In fact, “Bunnyman” is an incredibly well-made homage with a killer that made me laugh a bit one moment, then be totally creepy the next. Director Carl Lindbergh crafts an entertaining tale that doesn’t skimp on the red stuff and manages to entertain throughout.

A group of young folks are on the road when they begin to be tormented by someone in a truck. No matter what they do, the mad trucker just won’t go away. They try losing him, they try reasoning with him, but to no avail. When they do lose him, car troubles plague them. When one of their friends is killed while trying to fix the car, the rest must try to find help out in the middle of nowhere. From a crazed hillbilly to a flesh eating, chainsaw wielding man in a rabbit costume, things just keep going from bad to worse. If they can’t come up with a plan, they may not escape alive.

The most unique thing this film has going for it is the titular character. He may be nothing more than a man in a giant bunny costume but there is something that is bizarre, funny, and still manages to be a bit frightening. When he is wielding a chainsaw, that goofy rabbit smile never leaves his face. There is a torture sequence where one of the ladies finds herself being tortured, there is the bunny smile, a bunny dance, and a strange orchestral piece of music in the background that makes this the most memorable scene in the film. Cinematographer John Grove does a terrific job with lighting and shadow during the night scenes. I tend to notice that many low budget films end up with some sort of lighting issues and “Bunnyman” is a stand out and looks really good. The final shot of the film is actually quite beautiful with the silhouette of the bunnyman walking off into a stunning sunset.

Another surprise for me was the fact that the acting was well above the standard I am accustomed to seeing in a film like this. All were very talented actors who deserve a little extra credit for doing their best to bring these one dimensional characters alive. Did I mention that these characters have almost no common sense and make some of the most horrible decisions ever committed to film? These Einsteins do pretty much everything wrong. But we all know that people in horror films aren’t always known for their intelligence and it was easy for me to overlook their stupidity and just have fun with the film.

“Bunnyman” manages to entertain on a basic level. I was never blown away by anything or surprised by the direction the film went. I did have fun though watching these fools drop one by one, being iced by a giant bunny rabbit. Now to me, that’s entertainment. I wouldn’t call this a classic (could have used a pinch more guts to go along with the geysers of blood) but a good time nonetheless. Carl Lindbergh is a talented filmmaker and I really hope to see him go far. And I have a feeling this isn’t the last time we will see the “Bunnyman”. 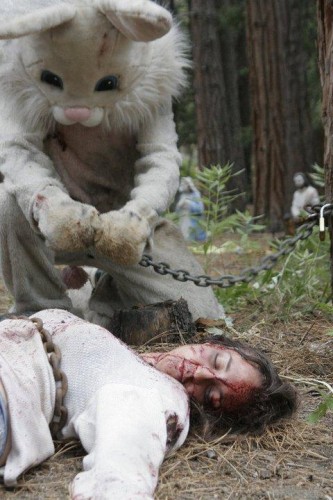 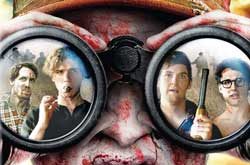 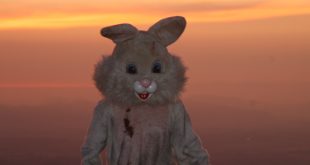