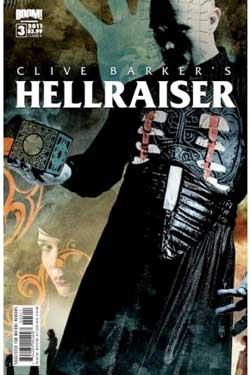 The world of the cenobites has long been one of a solemn existence without sun, without escape and without relief from pain. It appears that those days may be coming to an end as the demons in a “hell outside of hell” prepare for a new age.

In this 3rd of the series, we get a glimpse of many subplots forming giving us pieces to nibble without any real resolve. Demons appear that warn of a never ending cold that they endure rather than the idea of fiery pits and flaming souls. Those within the world are privy to a few who hold the power of the box. Whether that be the ability to use it or just to pass it forward.

Alex is one such soul who’s existence has been in torment at the demons hands. His brother awaits in hell while he is left to endure the suffering by passing the box to new souls. Though Pinhead company want to see the devices that imprisoned them destroyed, which can mean only one thing….hell on earth.

Kristy meanwhile is plotting an attack on those who support bringing forth these demons. The question remains…..will hell arise to the sound of the triumphant wicked and what does that mean to mankind. More delight by Clive Barker and Christopher Monfette. Art by Stephen Thompson