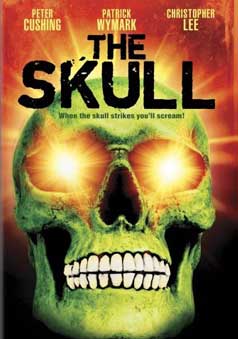 The Skull (from a story by Robert Bloch, author of Psycho) is a fearsome, finely acted and moody tale of Gothic horror. The skull of the Marquis de Sade has been taken from its grave, bringing terror to those who own it. Demonologist Christopher Maitland (Peter Cushing) is eager to add the piece to his occult collection. Despite the warnings of a friend (Christopher Lee), he’s got to have it. And does he ever get it.

I remember having nightmares as a child about a skull floating through the air, and I directly link that to this movie. Our tale begins in an old
cemetery in the dark of night as the head of a corpse is removed from the grave. This sets up a background for things to come.

In an auction house filled with art and artifacts, it’s the statue that incites murder, that incites a bidding war between horror’s best, Christopher Maitland (Peter Cushing) and (Sir Matthew Phillips) Christopher Lee. Phillips is drawn to purchase the piece at any cost. Maitland although disappointed about losing, is about to come across a piece far more valuable and far more dangerous. If you are a fan of horror collectables, they’ve set up Maitland’s library with a wonderfully horrorable collection of devils, demon’s and weapons. Anthony Marco (Patrick Mymark), an artifacts dealer shows up and wets Maitland’s’ appetite with a book in human skin binding about the Marquis de Sade. The following night, Marco shows up with the skull of the Marquis de Sade. In order to prove the authenticity, Marco reads a chapter from the book titled, “Love & Pain” where a Phrenologist robs a grave ( flashback to the beginning of the movie ) of the Marquis de Sade’s skull only to be found mysteriously dead. 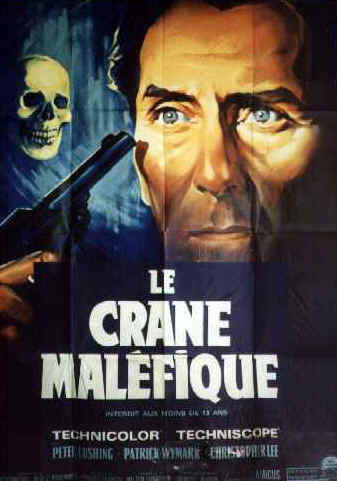 Weighing heavy on Maitland’s mind, he turns to Phillips for advice on whether or not to purchase the skull for his occult collection. Phillips confirms that it is the Marquis de Sade’s skull, he knows because it was stolen from him. Phillips warns Maitland not to purchase it. The skull is evil…. especially on the two nights of the new moon, a time of devil warship and black magic. Christopher Lee, brilliant in his own right, takes second stage to Peter Cushing in this film.

Cushing delivers and delivers in a big way, especially in the next scene where Maitland’s world spins out of control and he ends up playing a deadly game of Russian roulette with a revolver (spin the chamber, pull the trigger) and then gets trapped in a room with walls closing in on him. He wakes up in a place that he’s never been too before, Marco’s lodging house… it was all a dream? Ignorant to Phillips warnings, Maitland takes the Skull from Marco’s dwelling after finding Marco dead from a bite to the jugular vein.

After finding out what happened, Phillips gives Maitland a holy cross for protection against the skull, and gives another warning as the two nights of the full moon are here and death is in the air. Cushing unable to give up the skull, locks it away in a glass case. Lucifer… Beelzebub…

Leviathan… these are among some of the statues in Maitland’s collection, but it’s the statue that incites murder, that is the statue that calls to the skull. And this is the scene that scared the hell out of me, the skull breaks through the glass case and floats through the air watching Maitland’s every move. Maitland possessed, not only breaks into Phillips estate for the statue but is on the edge of murdering his own wife as she sleeps in bed. Consumed with confusion and despair Maitland stabs the skull in the eye instead, riddled with fear and panic he then locks himself away in a room. He finds out the hard way, there is no escape from THE SKULL! 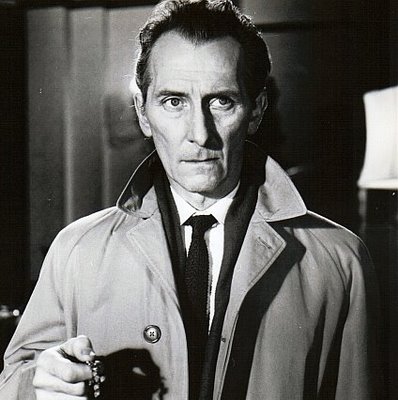 If you’re thinking about what horror movie to watch and can’t make up your mind, put down Halloween and Friday the 13th, they are fine for another day. Today, If you like what you just read… get a copy of this classic and treat yourself to a few scares.