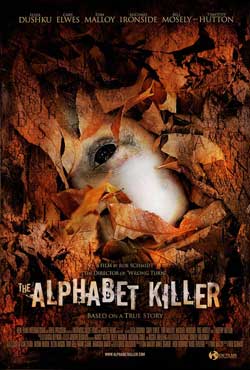 Loosely based on the true and still unsolved case of murders of young school girls that have double initial names in Rochester, New York between the years 1971 and 1973. Rob Schmidt of “Wrong Turn” fame brings us both a serial killer and a ghost story all wrapped up in one. The story pretty decent but does fell a bit slow at times….probably because of all the police drama.

I love movies based on real-life serial killers and usually find that the factual events are interesting enough to hold a film together however The Alphabet Killer uses the main character Megan Paige’s Schizophrenia in an attempt to make the film more interesting. To me this only made the storyline seem to focus too much on her character instead of the details of the murders.

I just felt it should have had a more realistic account of the crimes then what we are given in the film. I mean i have a hard time believing that an obsessive-compulsive police detective is pushed so far over the edge on sanity that she would attempt to take her on life and later actually be aloud back on the force, carrying a gun and fighting crime while still suffering from the ghosts of decomposing victims following her around. Just not very realistic to me.

I also didn’t like the fact that these ghosts never made any attempt to help Megan figure out the killer. All they did was cry ” HELP US” . They never lead her to any clues or suspects , they would just appear randomly and were no help at all.

The cast was pretty good, but i am not sure if Eliza Dushku was the right for the role of Megan .I did enjoy Eliza in ” Wrong Turn” and i do think she is a good actress however i didn’t feel convinced in her character in this. Eliza portrays the strong hot heroine role very good and it just wasn’t a very convincing police officer.

Also in the film you have a pretty solid cast that consists of some horror veterans…. Michael Ironside ( Scanners , Hello Mary Lou Prom Night 2 ), Bill Moseley ( House of 1000 corpses, The Devils Rejects ) , Tom Noonan ( Wolfen , Manhunter ) and Timothy Hutton ( The Dark Half ). The cast all held there own and blended well together with solid performances but i wish Moseley would have been on screen longer then the 3 minutes he was given. The special effects were well done , definitely delivered in scenes where a spooky atmosphere was needed.

The ghostly decomposed young school girls were good as well however they didn’t seem to add much to the movie , I think they were there to give more depth to the character of Megan and help to show her Schizophrenia , which she never seems to come out of. The FX was nothing to make this film a visual spectacular , but serves the purpose of telling the story. And the cinematography by Joe DiSalvo was very sharp and crisp. All in all the movie was shot very well but you do start to forget that it is based on a true story and when you do remember you can not tell what parts would have been fact or fiction.

I am surprised after watching this film that it did not have a much larger theatrical release , I could see this film being moderately successful at the box office mainly because of its original crime / ghost storyline and because of the strong cast and good production values. With so many crime shows being successful on TV , you would think it would go over well the the whole cop drama craze like CSI , NYPD Blue. So “The Alphabet Killer” is worth the watch , you will probably like this original crime / ghost story.

It’s not a masterpiece but better then most of the crap that comes out these days. Oh and the best part i saved for last…..Eliza decides to strip down in the film and shows off her stunning body. Well worth the price of the DVD alone.