Home | And the new LEATHERFACE is!!!

And the new LEATHERFACE is!!! 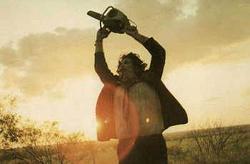 Although it is so obvious I just have to say, there is only one Leatherface and that my friends if Gunnar Hansen, all the rest have been trying to catch the master but with that being said, Gunnar is kind of past that whole things so it only stands to reason that someone need to pick up the mantle of horror icon-ness that is Leatherface.

We’ve had several, all good, all OK but no one has yet to compare to the G-man.

Another dude is about to get his shot.

Word just came out that the folks behind the new 3D version have picked their man and it’s all in the info below:

Playing Leatherface will be discovery DAN YEAGER. Director John Lussenhop knew he was perfect for the role immediately, after a chance meeting. He describes the actor as having huge farm boy arms, a brooding brow. He’s quiet, circumspect, and immediately struck a menacing chord with me. After five minutes, I could no longer think of anyone else for the role.

Rounding out the cast of friends visiting the inherited house are TANIA RAYMONDE (Lost) playing the role of Heather’s best friend Nikki, with acclaimed R&B singer TREY SONGZ making his film debut as Heather’s boyfriend Ryan and KERAM MALICKI-SANCHEZ (PUNISHER: WAR ZONE and JOHN Q) as Ryan’s friend. SHAUN SIPOS (Melrose Place, FINAL DESTINATION 2 and the upcoming HICK) plays Darryl in the film, a hitchhiker along for the ride who knows more than he lets on.

An all new cast of law enforcement and government professionals take on Leatherface in this chapter of the saga: THOM BARRY (THE FAST AND THE FURIOUS, INDEPENDENCE DAY, Cold Case,) plays the role of Sheriff Hooper, with PAUL RAE (TRUE GRIT) in the role of town mayor Burt Hartman. SCOTT EASTWOOD (FLAGS OF OUR FATHERS, INVICTUS, GRAN TORINO) will portray Deputy Carl Hartman, a young officer who is battling a powerful attraction to Heather while hunting Leatherface. Noted character actor RICHARD RIEHLE (OFFICE SPACE) will play Sawyers family attorney Farnsworth. And there you have it. A lot of o new names in the TCM 3D camp. That’s all from the TCM3D front today but keep it here, updates will be occurring soon.