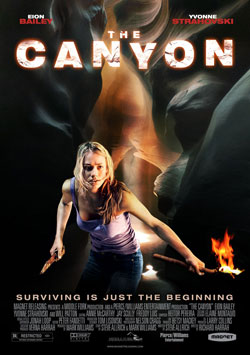 A back country excursion deep into the Grand Canyon wilderness is a honeymoon come true for city slickers Nick (Eion Bailey) and Lori (Yvonne Strahovski) until a viper bite debilitates their grizzled old guide (Will Patton), leaving the couple leaderless and utterly lost. Now the pair are in a fight for their lives against starvation, treacherous weather, ravenous wolves and worse.

In the classic tales of honeymoons gone wrong and survival of the fittest, Richard Harrah’s The Canyon is a thriller that keeps the viewer interested with various obstacles at hand due to Mother Nature. A duo of willful protagonists that advocate going on a dangerous trek into the canyon help propel the storyline with beautiful scenic overhead camera shots of the wild terrain.

Nick(Eion Bailey) and Lori(Yvonne Strahovski) Conway are blissfully happy, as they drive through Williams, Arizona searching for a hotel room. Their SUV reads “Just Married,” giving way to the story of a couple on a honeymoon looking for adventure. They shack up in the hotel, and Lori tries to convince Nick that they should shack up all night instead of taking a mule ride through the canyon. Being adventurous, Nick declines Lori’s offer to stay at the room all day and they go to see if they can get backcountry permits. Being May, they are declined at the office a back country permit and go to a bar to reconvene about what to do. 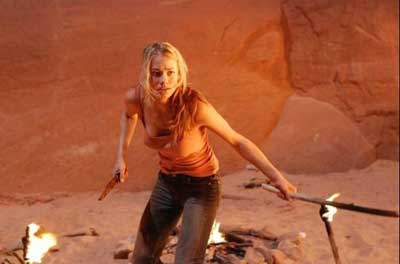 There, they meet Henry(Will Patton), a backwoods weathered cowboy whom guarantees them back country permits and a tour down into the canyon. Lori at first declines, but Nick convinces her that this may be their only chance of a successful honeymoon.

The next day, Saturday, they set off on mules into the desert canyon. The views are gorgeous, and Lori and Nick trust Henry’s intelligence of animal fights and trips into the canyon. All goes well, and after Lori and Nick take a moment together, they come back to Henry saying that he can show them some 12,000 year old hieroglyphics within the canyon. The trek is dangerous, but the couple agrees and goes on with their trek. Unfortunately, Mother Nature strikes in the form of a Diamondback Rattlesnake, striking Henry twice and breaking his leg after the mules take off. Fortunately, Nick finds one of the mules but looses the other 3. Nick, Henry, and Lori are now left with the task of finding their way back without any necessities such as food, water, matches, first aid kits, etc.

Henry does not survive the snake venom, and Nick and Lori are left to fend for themselves. Lori wears fanny pack, and has a pack of gum that they use for sustenance. Also, Lori has a cell phone but could barely get signal. They make their way to a dead end cliff, and decide that if they climb the mountain they would get signal. This was also unsuccessful, as one slip sends the couple tumbling off the cliff after finally getting signal and a response from a 911 operator. Nick’s leg is instantly pinned between a boulder and a cliff, and Lori does not sustain any injuries.

Nick being stuck, the only way to escape is decided to cut off his leg. Nick tells Lori she must retrieve Henry’s knife off his decomposing corpse, and must fight off the wolves that are hungry for their flesh. Lori is successful in her attempt, and proceeds to sterilize the knife by fire, and painfully remove Nick’s leg that was slowly becoming infected. 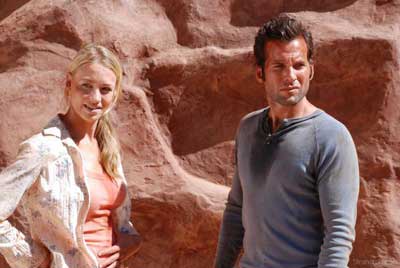 Wolves continually bother them, and Lori fights them off with all her strength. The battle of survival fuels Lori’s destiny of finding escape from the canyon. The scenic views of the canyon are very beautiful, and were spectacular in how the couple was small dots in a huge area trying to survive. The couple’s four day trek within the canyon was painful to watch, having to live off very little food and water. Their emotions also took a toll, when Nick was painfully suffering a broken leg.

Surviving Mother Nature was the key goal in Richard Harrah’s The Canyon. The couple realizes that staying on the beaten path is probably the best option, and going on adventures with strange men is problem a less favorable choice from then on.