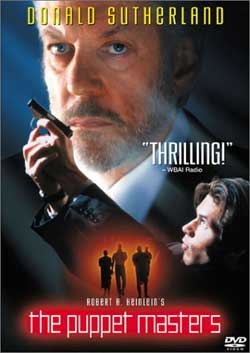 The Earth is invaded by alien “slugs” that ride on people’s backs and control their minds.

Stuart Orme, ( Inspector Morse and Merlin ) brings us a middle of the road Sci Fi thriller from 1994 named “The Puppet Masters” based on the popular novel by Robert A. Heinlein. It stars Donald Sutherland (Invasion of the Body Snatchers), Eric Thal (The Good Guy) and the always cute Julie Warner (Tommy Boy and Doc Hollywood) and the screenplay was written by at  least a dozen  writers  right out of the gate the production was riddled with rewrites and disagreeing viewpoints as to what and what not to keep in the movie. The novel, which is highly regarded by sci fi fans, was hard to adapt and the final product which had writers Ted Elliott, David S. Goyer and Terry Rossio involved as well, differs much from the 1951 novel. So, this film basically has fans split down the middle. It is not for purists but it does merit a watch only because it does have some genuine creepiness and some interesting sci fi stuff going on. Many elements and plot lines (Like everyone running around nude by the end of the book) are left out but the film does deliver some chills that while not always genuine do have a kind of cheesy charm and having an alien parasite invasion to handle can make for some tongue in cheek fun. It is a fleeting though and the further the story moves the more evident the mediocrity is. 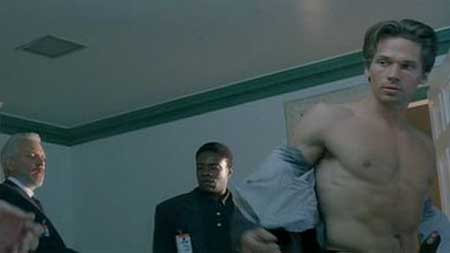 Donald Sutherland plays, a bit too dryly and seriously, Andrew Nivens who is the head of the “Office of Scientific Intelligence” Thal plays Sam, his son. After an unidentified object crash lands in Iowa and interrupts the local farm boys and their frisbee playing, they are dispatched to investigate. Sam and Andrew appear estranged and have a bad history is seems. They team up with Julie Warner an “Exo-Biologist” named Mary and the round off the already eclectic and strange casting is Richard Belzer (yeah…Richard Belzer) as Jarvis. Once they all meet up at the airport they head on over to the small town and pass a humorous sign that says “UFO – 500 Feet” they then know they are on the right path to the crash site. When there they find a bunch of locals lining up and then going through a large and very fake looking UFO. Seems like they’ve been had. The UFO obviously was built by the towns folk and they are exploiting the interest the town has in the object that supposedly crash landed there. Mary, while walking through the woods notices some strange looking character that appear almost to be in a trance. At the Fake UFO, Mary pays one of the local kids to enter and go through the “UFO” once she does she just can’t seem to get enough courage up to go inside. She feels threatened and Sam has to climb up and get her back down. No one from the group enters. Mary tells Sam and Andrew that the men folk are not “re-acting” the right way to the presence of a woman there. Huh? That doesn’t sound very scientific. She proceeds to think that opening up her shirt and showing cleavage is a scientific way to get men to react to her. If they don’t…well then they must be aliens!

When the group arrives at a local radio / tv station and interview the manager about the UFO crash do things get into gear and the film begins to move. All in the first 15 minutes. I must give Orme credit for picking up the pace even though so much stuff goes unexplained and unexplored. They find out that the manager has a creepy crawly alien “Slug” attached to his back. After a scuffle involving Sam and Mary the slug comes off and after spinning around almost comically on the ceiling fan they capture it in Andrew’s briefcase. They narrowly escape with the slug. They hop in the company vehicle and Jarvis get pushed aside to let Sam drive. What happens next is a very badly executed car chase with some random dude hanging on the the back window trying to get at Mary. Her and Andrew, in the back seat try to ward him off. They never convincingly sound like they are in any danger though. It seems like if they are just going through the motions. Sam eventually gets the guy off by colliding with a phone booth. Then another local kid on a bike leaps on and crashes through the windshield. All mayhem ensues but they get away and the group takes off in the company jet where Andrew prepares  a quarantine for the town. They get back to Headquarters and gather intelligence by having a remote team with Kieih David (The Thing) in the lead. Will Patton (Falling Skies) plays the frenetic and overly enthusiastic  Dr Graves who is just hands down one of the most stereotypical “crazy” scientists to come along. Keith at one point tells the group that Grave sounds like he want to “F*** the Slug”  He talks lovingly about it and alerts the rest of the group that the slug can adapt to our surroundings during the attachment. “If we breath air then they breath air” During the debrief though Sam notices that Jarvis seems to have quit smoking. I don’t get that at all. What does Jarvis and his smoking have to do with anything? But anyway we find out that Jarvis himself has a slug on him as well and he bolts.

The slug detaches from Jarvis almost killing him and Andrew has Sam take off his shirt to reveal that he is not a host to a slug as well. The action ensues and the team try to continue to chase the slugs down. They determine that the hosts at one point get used to having the slugs on them. Warner and Patton examine the slugs and they find out that the slugs have a sensor or antenna kind of thing which allows them to communicate with eachother. Jarvis ends up killing himself in the clinic by switching IV bags. Pretty gruesome.

Sam eventually gets a slug attached to him and he and another man close in on political organizations led by Andrew Robinson (Star Trek Deep Space Nine) and try to spread the slugs throughout the higher echelons of the government. Eventually Sam gets caught and the team including Graves hard wire Sam to a machine in order to communicate with the alien life form and find out why they are here. Andrew asks that question and doesn’t really get an answer. The slug just tries to wear Andrew down by telling him that Sam resents him. It is a cool moment though. One of the better scenes and we get to see how far up and around the slug’s tendrils get into the brain. Andrew has the slug shocked before it attempts to destroy Sam. What do they really want? How many are there and can they save those who are infected? Are they a hive mind and what does it take to utterly destroy them?  The stakes are high in this alien invasion flick that builds and builds with a great pace but unfortunately at the cost of good performances, slick action and very accurate “science” in the story.

It’s hard to accept that The Puppet Masters could have been a  lot better than it really is. A great cast (even Robert Picardo is in it), a classic alien parasite story and cool and nifty special effects. Most of the problems comes from the performances. Especially Sutherland and Thal in the leads. Thal and Sutherland sound tired, say their lines emotionlessly and they whisper. Huh? Why are they speaking and emoting so deadpan? I don’t get it. They never sound like they are in any trouble or concerned about anything either. Sutherland also shouts just as deadpan too. He yells “Stop him!” “Get her” with equal boredom and it shocks me how this is the same Sutherland from “Invasion of Body Snatchers” Too bad. Plus Thal is no help. He should be a strong lead here but his chemistry with Sutherland and Warner is nil. He’s physically  fine in the role and capable for an actioner but his acting and credibility is stillborn. Also in part being compromised by the script that doesn’t quite gel. The ensemble cast all seem bored too. Belzer’s presence is an enigma. The actors appear to be going through the motions. Except Patton who relishes the role of Dr Graves and plays him wonderfully. He has better chemistry with Warner than Thal does. Warner’s character, Mary, is the strongest presence in the movie. Her TV method acting is a bit on display here and she can’t quite rise above that but she is very capable and spontaneous. Spunky, tough and cute she actually sells the picture when just about every actor around her walks around like zombies…they don’t need no stinkin’ slugs. The film devolves into just another rip off of  any  of Jack Finney’s adapted film material like Sutherland’s “Invasion” film. 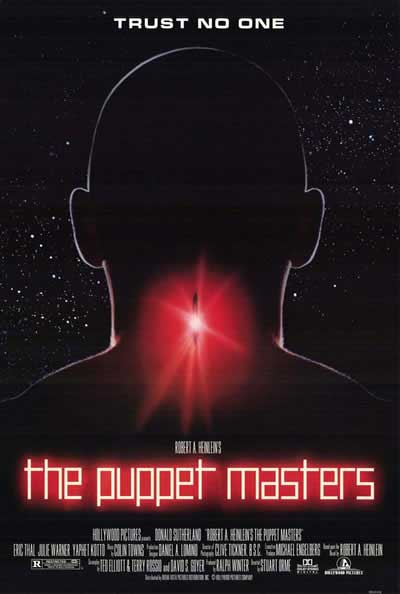 Some very TV looking action pieces barely keep the movie above water and one starts to wonder if a film of this stature would have done better on the small screen. It has The X-Files written all over it. Orme has a decent eye for sets and details as well as camera placement but the chases and such appear very staged and uninteresting. I like the pace but Finney’s novel which came out after Heinlein’s book is the clear winner here. No one is going to really care if Finney’s book copied Heinlein’s when this adaptation is too loose and quite uninspired.

There has been 4 movies based on Finney’s book but Hollywood Pictures and the writers opted to come up with not a vivid and capable retelling of Heinlein’s book but a crooked and tired sci fi chiller. The Effects including the parasites themselves aren’t half bad. We get close ups of the guts and the weird and freaky tendrils and tentacles. The movie never gets very gory. I don’t really know if that’s a bad thing in this film’s case. The Puppet Masters, which has a decent set up and a quick pace still feels amateurish and routine. What could have been an engrossing story is sabotaged by some very wooden and flat performances and some strange casting. Purists of the book will most likely be disappointed by even if you have never read the book odds are you will just shrug this mess off and move on to the next sci fi thriller. A movie that should have been damn better than it is now just gets lost in a huge pile of mediocre alien invasion movies. If there is absolutely nothing better on TV during a rainy Saturday afternoon, you could do worse…or you could just fall asleep. 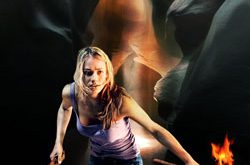