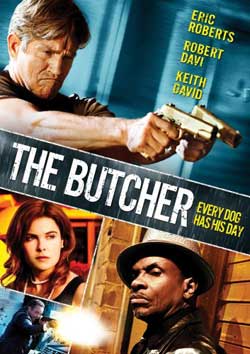 Merle Henche (Eric Roberts) — a boxer turned mob enforcer with more than 20 years of dedicated service under his belt — learns what loyalty is worth when his employers set him up to take the fall for the multimillion-dollar heist of a rival gang. Unfortunately for them, Henche discovers the trap and ends up with a piece of the take. Now, he has just two goals: to get the rest of the money and to exact revenge on his former bosses.

Spending years of dedication in a life of crime leads to the question: what happens after a life of crime? To the lucky ones who do not get caught and arrested or the ones who nearly escape death on a day to day basis, quitting this fast paced life seems almost impossible. Jesse V. Johnson’s action packed film “The Butcher” follows the anticipated retirement of Merle Hench (Eric Roberts), and what all he must face to end his career of being a fellow mobster.

Hench is shown on his last limb in his gang life, distressed with dealings with other gangs and wanting to just quit the ordeals all together. He drives around in his 1969 Dodge Charger muscle car, and is shown in a sulking mood as he frequents his ex girlfriend’s home to watch her from across the way. Hench also is no stranger to alcohol, or the waitresses at the bars like good friend at Murdoch’s bar Jackie(Irina Bjorklund.) He also is haunted by his nickname “The Butcher,” which was gained by killing a man with a butcher cleaver during his first year of gang dealings. 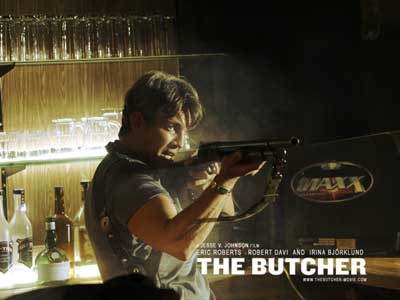 Hench is no stranger to the Murdoch gang, as he is invited to their initiation of a new leader, Eddie Hellstrom (Jerry Trimble.) There is already tension that is shown between Hench and Hellstrom, which is equivalent to Hench’s anticipation of getting out of the crime life. Hench then runs into another friend for a rival gang, Larry Cobb(Keith David. ) Through a little bit of old fashioned betting, Hench proves his seasoned skills by going to a casino and winning over $19,000 to pay Cobb. He also proves that he is still a fighter, when some of Cobb’s men try to heckle Hench in an alley.

Hench returns to see his favorite waitress Jackie, and asks her to run away with him. She shrugs him off, not able to see a life outside of her career as a waitress. Hellstrom comes in, and meets with Hench telling him that Murdoch wants him to run an errand to see Doyle (Paul Dillon) over at the Spearmint Rhino. Upon Hench’s arrival at The Rhino, he is approached by women offering lap dances and drinks. He declines, and is strictly business wanting to see Doyle. While Doyle is distracted by Hench, Murdoch’s gang runs in and opens fire demanding money from the workers. Hench is startled, and shoots and kills Hellstrom unaware of the masked intruders. After this robbery, Mudoch’s men leave building and leave a giant sack of money outside of Hench’s car. Hench quickly decides to take the money with him, thinking that it would make a good retirement pension.

Hench is sadly caught between Doyle and Murdoch (Robert Davi) during this unfair dealing, and his dream of an easy disappearance of gang life starts to fade as he decides to end his career with a bang. He goes back to Murdoch’s to ask Jackie to leave with him, and within moments of deliberation she agrees to go. Hench promises her that her life will be wonderful with all the money he had, and even makes dealings behind his back if he is killed in action that money would be reached to her in one way or the other. After getting stalked by Murdoch’s men, Hench proves he is still a skilled marksman as he eliminates a whole group of gang members. Jackie convinces him that the best thing to do is to confess, so he goes to both Doyle and Murdoch. Both of these encounters deem bloody and hassle Hench’s dreams of an easy severance from gang life. 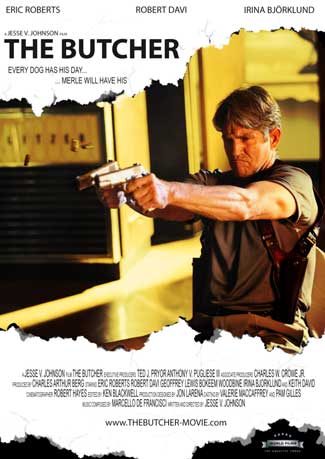 Eric Roberts portrayal of Merle Hench is almost unbelievable, as he is shown walking through bullets on many occasion not being hit by one. Roberts impressive stature made him a very strong leading man, but showed a caring side with his adoration of Jackie and the lengths he would go to make sure she is lead to the perfect life. The gun fights are really bloody, especially the last scene between Hench and all the rest of Murdoch’s men. In one particular part, a head is shown being exploded by a single shot of a golden gun carried by Hench. Also, there is a part where a man’s finger is shown being hit by bullets adding to the gore and blood to the movie.

Jesse V. Johnson’s “The Butcher” gives an emotional portrayal of what happens when a mobster decides he wants to retire from a life path that is hard to quit. Hench’s life is nothing close to slow paced, and his desire to live that life seems to be out of reach as he keeps being sucked into the gang lifestyle. This film pretty much explains that after you dedicate your life to gang servitude, you soul is sold to this career and must end as soon as your service is rendered.