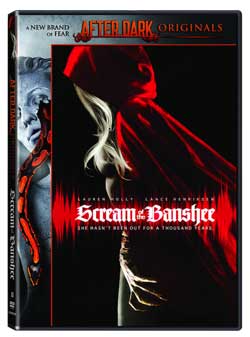 An archeology professor unearths a dangerous artifact, unwittingly releasing a creature that is able to kill with the power of its bone-splitting scream.

Ya just gotta love these SyFy channel movies. Okay, maybe you don’t but you do have to admit they can be great B-movie fun. Scream of the Banshee falls into the “let’s just have a good time watching this” type of movie. Sure there are plot holes and things you wish they might have done a bit differently but don’t think too terribly hard and you should have fun. It actually has some scary parts as well which in all honesty automatically puts it above most of the other SyFy fare.

We start off in Ireland back in the year 1188. A woman in a red cape is on horseback literally riding for her life through the forest. Close behind her is a small group of Irish Templar Knights hell bent on seeing this woman wiped off the face of the earth. Or should I say banshee because that is exactly what she is. Suffice it to say that the Knight’s mission is successful and one of them promptly severs her head and locks it in a very cool looking metal box.

Cut to the present day where we find archeology professor Isla Whelan (played by the ever lovely Lauren Holly) working on the Santa Mira Archive Project. Which is a fancy way of saying that she and two of her assistants spend long hours in musty old rooms cataloging all kinds of ancient artifacts. Otto (played by Todd Haberkorn from The Collector) is the goofy assistant, always ready with a joke while Janie (played by Leanne Cochran from the recent Green Lantern) is the more serious type. Together the three of them are putting in some seriously long hours as they are up against a tight deadline. That would be okay if that was all they had to worry about. 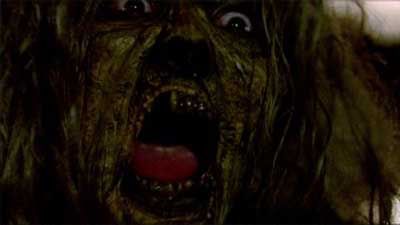 But lucky for us someone sends them a box that, when opened, contains an Irish gauntlet. Add to that a secret room that Isla’s daughter discovers that contains yet another mysterious box and you can just smell the trouble brewing. You see, inside this newly discovered box is the metal box that the Irish Templar Knights used to capture the banshee. Good lord, what is up with all of these boxes? Well, you take the gauntlet from the first box and use it to open the lock on the metal box and presto, you get one very creepy and ugly, partially preserved and severed head of the banshee. And you can pretty much guess that it all goes downhill from here for our small group of lab rats. Not to mention anyone else that might be unlucky enough to hear the scream of the banshee.

All in all I would have to say I liked this movie. Taking it for what it is, it definitely keeps you entertained. The banshee head, when first unboxed, is extremely cool and actually pretty darn scary in its own right. The kills aren’t exactly varied but that doesn’t really detract too much. After all, there is only so much one can do with a banshee scream. Blood flows readily while never feeling too over the top. The acting is actually quite good all around. Interesting to see horror fave Lance Henriksen as Broderick Duncan, a disgraced, former professor who knows perhaps just a little too much about this whole banshee thing.

The direction is very well done with a couple of really good tension scenes. The script keeps things moving at a pretty good clip, no real filler here. Part of me wished that there was some more of the “history” explained about the origins of the banshee and what not. Oh well.

Overall I would have to say catch this one if you find it on the SyFy channel one Saturday afternoon. Really doesn’t rate a purchase but good to see once. Perhaps one of these days we’ll learn that opening ancient boxes with ancient gauntlets delivered to us by mail isn’t the wisest thing to do.

Coming out on Lionsgate Home Entertainment and DVD