Home | CHILLERAMA gets some artwork

With Comic-con fast approaching the genre news is coming in fast and furious and one of the more highly anticipated films getting it big debut at the show is CHILLERAMA which unites four movers and shakers of modern horror for a CREEPSHOW like anthology film. 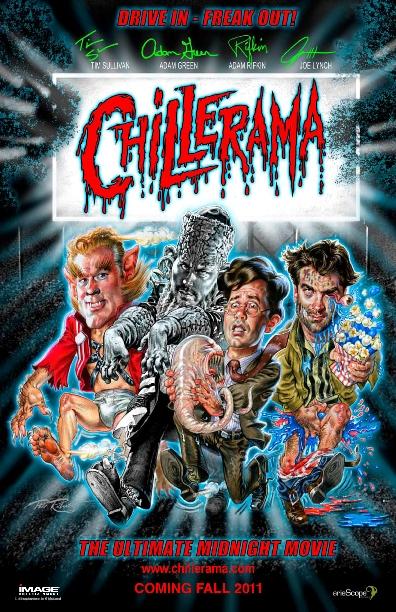 The Comic-con screening will be taking place Friday evening, July 22nd at the Gaslamp 15 Cinemas. After the screening, stay for a Q&A with ALL FOUR DIRECTORS , Adam Green, Joe Lynch, Adam Rifkin and Tim Sullivan. Produced by ArieScope Pictures and in the spirit of classic omnibus films like Dead of Night, Tales From the Crypt, Creepshow and Twilight Zone: The Movie, CHILLERAMA offers something for every bad taste. With titles like Wadzilla, “I Was A Teenage Werebear, “The Diary of Anne Frankenstein,” and “Zom-B-Movie,” CHILLERAMA features appearances by Joel David Moore (Avatar, Hatchet), Lin Shaye (Insidious), Ray Wise (X-Men: First Class), Kane Hodder (Hatchet and Hatchet II), Eric Roberts (The Dark Knight, Sharktopus) and more cameos than one can (body) count, CHILLERAMA is a festival of gore, guts, goofiness and good times.