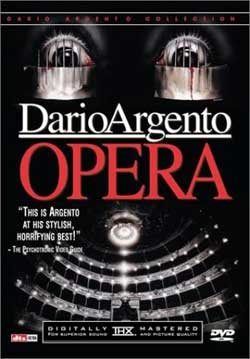 When the leading diva of Verdi’s “Macbeth” is run over by a car, her understudy, Betty (Cristina Marsillach), takes over the role. Things go from bad to worse when the madman begins to kill other members of the cast — and forces Betty to watch. The finale in this exercise in baroque horror from the mind of frightmeister Dario Argento stems from an incident in Betty’s childhood that links her to the killer.

Opera begins at a opera practice, I know what are the odds. As the rehearsal stalls the female lead gets fed up and storms off. As she leaves amongst all of the hub bub, she gets hit by a car. Cut to Betty (Marsillach), a young lady laying in bed listening to opera music on her stereo. You come to find out that she’s the understudy of said lead actress. As her manager, Mira (Nicolodi), tells her the news about taking over the lead in Macbeth, but Betty is hesitate to do so. After some pleading and persuasion she agrees to do it. Her first performance out of the gate is a tremendous success. The audience applauses in approval, but she has one very special fan who has very special plans for our lovely Betty.

I won’t hide or conceal my respect and completely heterosexual love for Dario Argento. Him and John Carpenter are my favorite directors. I love Dario’s total inhibition, he goes big every time without apology. A lot of the fun in a Argento film is in the over the top nature of his movies. The fun factor of horror films, in my opinion, is a lost art. Although I lean more towards his supernatural contributions “Suspiria” and ”Inferno”. But still get the wild, unpredictable tactics from his giallo films. The camera work in “Opera” is frenetic as usual, it’s flying and swooping from all type of directions. You get a couple of those drastic uses of color made famous in his past flicks.

The deaths like most Argento projects are fun, your gonna get a nice helping of blood and guts. Plus, I just love the wackiness of it all. There’s a scene that constantly plays out where it’s a close up shot of a human brain throbbing. There’s no real mention of what it means, or who’s brain it is. For my money, I say it’s Argento but I could be wrong and probably am. But the best part for this dear reviewer of “Opera” is the musical score, kudos to his long time collaborator, Claudio Simonetti. Now, I’m not a major music guy in the sense of buying a movie’s soundtrack.

But, the score in this movie stands out more than any Argento film to me. I enjoy the big booming opera music. It is very dramatic and fits the tone of the movie. But the best use of the score, is during the death scenes. As soon as danger is a mist, the flick breaks out into these loud, roaring kinda like eighties hard rock songs. You come for a horror film and get a Scorpions concert. Luckily, I like hard rock and the eighties so for me it’s good times. The only way it could be more awesome is if the killer takes off his mask and turns out to be Sebastian Bach.

I being a Argento devotee I don’t have much problems with this film. The complaints most would have with Opera, are the complaints you could make with most Argento movies and that’s the plot. The plot agreeably is all over the place and takes massive illogical leaps. The nonsensical stuff is more acceptable in films like Suspiria and Inferno because it’s witches and magic, etc. You can make up your own rules in that realm. But, when you go for a more grounded, realistic story people are expecting some thing more rational. Like the way they discover the murderer is very silly, but fun none the less. Which is what I think is the point, I think Dario knows some of this stuff borders on the ridiculous but as long as it allows him to put together a fun and exciting set piece, to hell with logic I say.

Opera is one of my personal favorite Argento flicks. In fact, it’s the last one I truly love. I really think the joy Dario had making a film like this shows up in every nook and cranny. It’s clear from his previous work he has a love for music and the arts. So I can imagine the bliss he must’ve been in making this.

I find this movie highly entertaining. A rocking score, gory deaths, and animal on human crime what else can you ask for. I feel like Billy May selling you a frickin marker to get scratches out of your car. But that’s how passionate I am about the guy. It’s what got me into horror films and got me into Italian horror. Are there plot points that make no kind of goddamn scene, of course. But, a half hour in your not paying attention to the story, your just going along for the ride. Alright, I think I’ve made my opinion clear, so I’d like to end this with a poem. If you please.