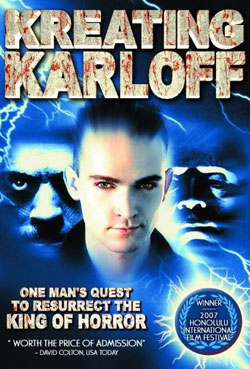 For the first time in 75 years, A young actor brings back to life two of Universal’s iconic Karloff monsters,”The Mummy” and “Frankenstein” for an elaborate screen test and tribute to the legendary Boris Karloff.

A Labor of love, a great documentary, a moment of magic, a tribute to greatness, Kreating Karloff is all of those things and more. Conor Timmis has a dream. This film is that realization. A fan of Boris Karloff films, Conor sets out to gather a group of filmmakers, makeup artists, actors and horror historians to not only create and document the event but re-create a likeness of Karloff on screen in fantastic detail. More than just a simple tribute, Conor becomes Karloff which is the most amazing of all. It’s a film for fans of a lost generation, a legend of classic horror and re-introduction to one of the greats who influenced so many others over the years.

In watching this film, it was refreshing to see Connors dedication to this event and his transformation. Conor who some might say has a bit of a Neil Patrick Harris look to him brings in modern makeup artist Norman Bryn to not only replicate Karloff’s makeup but reconstruct Conor’s face to a startling likeness. Great detail is presented as he goes over his process to build up the face structure in levels and then apply many of the old school techniques used by Jack Pierce to attain the stunning look that Boris used. We are not only given the before and after, but the steps in between as well.

We are taken through steps and famous rev-creations of scenes form Boris’s films, Frankenstein (1931) and The Mummy (1932). It is no fluke as we see the dedication that went into this re-enactment. Beyond the process of the makeup, I was astounded to hear Conor’s dead on impression of Karloff’s voice and line re-citation. It is one thing to see the makeup but a whole nother to see the performance and voice articulated so precise that you would think you were watching the real deal. Time and effort were also invested to recreate the lighting used, the camera angles, shots and the accompaniment by other actors to interact on screen and play out the classic scenes. I would have to say between the 2 transformations that the Mummy was the greater. This is part due to the part having vocal lines. Frankenstein was very well done, however with Conors young face the makeup lacked the longer more aged look of the original Boris. Though no fault as the performance was a hoot to see.

Wikipedia lists the following background information on Karloff, Boris Karloff born William Henry Pratt (23 November 1887 – 2 February 1969) was an English actor who emigrated to Canada in the 1910s. He is best remembered for his roles in horror films and his portrayal of Frankenstein’s monster in the 1931 film Frankenstein. His popularity following Frankenstein in the early 1930s was such that for a brief time he was billed simply as “Karloff” or, on some movie posters, “Karloff the Uncanny.”

This film is not just for classic horror fans but for film makers, actors, and makeup artists as well. Add to that, that it makes for a great family sit down that explains the history of Karloff and the work that went into making films back then. Makeup breakdowns are explained along with how the industry has changed. We are given great insight on why classics such as these are less seen today than modern fare and revealed a greatdetail of background on the man and his legacy.

I also really enjoyed the classic performance by Liesl Ehardt who obviously put time into preparing for the reenactments as well. Great job to all, a really nice watch for those looking for something new and unique.