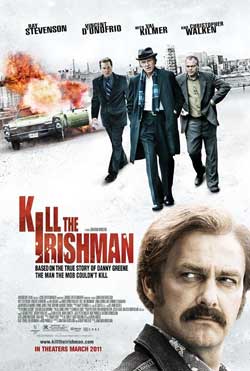 Set in 1970’s Cleveland, “Kill the Irishman” is based on the true story of Danny Greene, an unhappy dock worker who got involved with the mob in the area. He made a name for himself among the criminal underworld and was responsible for basically triggering a mob war when he is held responsible for some money that is stolen from some powerful New York mobsters. Greene is a tough, fearless, take no sh*t from anybody type of guy, and when he is around you can bet that a few beat downs, bloody violence, and numerous deaths are sure to follow.

As I have stated before, I am not really into action flicks at all. I don’t really care for gangster or mob movies either (I have never seen any of “The Godfather” films), so I wasn’t really looking forward to watching “Kill the Irishman.” I am glad I gave it a chance though, because I thought that it was quite interesting, had some pretty cool action sequences, loads of violence and death, and a main character that was just an all around bad ass. I had a pretty good time with this movie and I think that a lot of other viewers will as well if they give it a chance like I did.

One of the things that I liked about the movie was that it was just genuinely interesting. I had never heard of Danny Greene before I saw this movie and I had a great time getting to know him and watching his story unfold. Greene himself no doubt had a very interesting life, and the filmmakers do a great job of bringing his story to life (which surprised me considering that he was the same person who penned the screenplay for the atrocious Bruce Willis/Ben Affleck abortion “Armageddon,” which I consider to be one of the worst movies ever made). Greene is by no means a saint, but he has his own code of ethics that he lives by and I really wouldn’t consider him to be a bad person regardless of the fact that he was involved with organized crime. He comes off almost like a real-life Punisher (which is funny considering Ray Stevenson played the Punisher in the second film and owned the role), and I think that I would feel better knowing that this guy was watching my back.

Ray Stevenson is probably the best thing about this movie due to the fact that he did such a kick ass job in the role. He does a great job in bringing the character of Danny Greene to life and I don’t think that anyone else could have played the role as perfectly as Stevenson does. In addition to making the character a tough as nails action hero he also makes him realistic and just likable in general. I think that Stevenson is one of the most underrated actors in the business today, and he really proves how talented he is in his portrayal of Greene. Hopefully this movie will lead to more action roles for Stevenson, as I think he definitely has the potential to be the next big action movie star. I thought that he ruled in “Punisher: War Zone,” and he does in this movie as well.

The rest of the cast was pretty damn impressive as well. We have a lot of familiar faces here including Val Kilmer (not really a fan myself, but I know some people dig him), Vincent D’Onofrio, the lovely and talented Linda Cardellini (who plays Danny’s long-suffering wife), and the always good Christopher Walken. As a matter of fact, other than Stevenson himself I think that Walken is the other reason to see this movie as he shines in his portrayal of the sleazy criminal that Greene gets involved with at one point. All in all the movie has a hell of a cast and I think that everyone involved did a stellar job.

I was surprised by how much I liked “Kill the Irishman.” I really got into it and after watching it I now want to go check out the book To Kill the Irishman: The War That Crippled the Mafia by Rick Porrello (which the movie is also based on). I had a great time with this film and would recommend it both those who are into action flicks and those who aren’t. If you want to try something a little different then give this movie a shot.