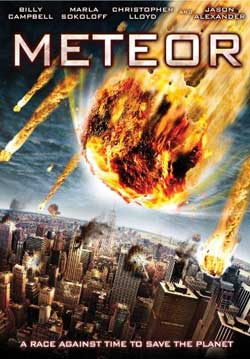 As a meteor hurls toward Earth, Dr. Lehman (Christopher Lloyd) and his assistant, Imogene (Marla Sokoloff), scramble to get lifesaving information to Dr. Chetwyn (Jason Alexander), the only man who has the means to prevent the disaster. As the world panics, the countdown begins. Meanwhile, as a police chief (Stacy Keach) tries to keep his small town safe amid the chaos, a madman has his sights set on revenge. Ernie Hudson co-stars.

Spawned from the same concoction that we consumers have come to know as the Sunday night disaster mini series or trilogy for that matter, comes a new gem titled “Meteor”. I missed this one cable, but am glad I got a second chance to check it out.

Maybe I’m bias, but I love disaster films! They tend to echo our inner fears about what’s to come and deliver them in front of us to experience from a fiction point of view. Well if your a scientist this film is not that far from fiction as it has been well documented the impending possibly of Earth being struck someday with rogue meteorites. With the 2012 paranoia creeping up on us, this of course is just one of several possible future scenarios. The other flip of the coin comes in the debate whether government has really taken any real precautions against potential world killer disaster? Well as they say on with the show.

The good news here is that they’ve really ramped up the cast with a pretty well stock of known actors. We got Christopher Lloyd, Michael Rooker, Stacy Keach, Jason Alexander, Ernie Hudson, Bill Campbell and the very cute hottie Marla Sokoloff leading the pack. As we have come to know in so many of these extended storylines, the film is based of course around the main focal point of meteor storms and the big one herself know as “Cassandra”. The film though is spread among mini stories within that all focus on stories “within” the story so to speak. So the drama is spread and interchanged between segments that all have “something” to do with the disaster scenario. Jason Alexander is the neurotic nervous and jittery rocket scientist who is in charge of directing the missiles to hit the right targets. In other words, the big meteor.

Then we have the genius Dr. Lehman (Christopher Lloyd) who actually “has” the right coordinates accompanied by his assistant Imogene O’Neil (Marla Sokoloff). Michael Rooker and Bill Campbell share a cop versus bad guy drama that never seems to end with the 2 trying to take each other out. Ernie Hudson who plays Gen. Brasser is the military command who has brought Dr. Chetwyn to try and beat this big chunk of rock.

Meanwhile Sheriff Crowe (Stacy Keach) has his hands full dealing with a small town that is on the verge of going crazy and creating vigilante warriors. Chelsea Hapscomb (Erin Cottrell ) is one of the trapped within the rumble victims trying to work things out and deal with those in need out side of her range. Then of course we have the world which is on the edge, counting their days and delaying with stones falling out of the sky which are destructive enough on there own. All the signs are here, supply and demand, traffic, panic, changed attitudes, violence, lack of control and everything in between. 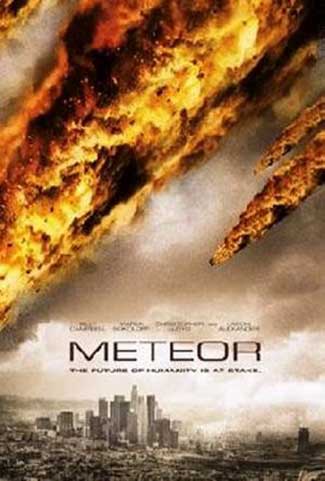 So what happens? A huge asteroid is knocked off course by a colliding comet. This asteroid named “Cassandra” is on path with Earth. With only a few missiles in reserve for this kind of thing, the hit has to be dead on. 60 miles in diameter, the huge rock is bound to leave debris. With 24-48 hours upon impact, time is of the essence. Now the real issue here is if they don’t completely destroy the thing then there is others to be worried about. However, what if they miscalculated the extent of Cassandra? With satellites being knocked out and fall out taking out much of the measuring systems ….a real problem is looming!

Meteor is a fine film which entertains with what it sets out to do. The FX work is decent and really good at times employing a number of cinematic magic tricks using digital mattes, CGI overlays, 3D atmospheres, and a number of effective fireball-rock shooting tricks. For what its worth, the FX aren’t Spielberg, but they sell the intention of what the effects of this scenario would look like.

Bonus points go to the pool of acting talent which makes this really a pretty good sit down with the family and eat popcorn type of night. We’ve seen it all before but ….I’m ok with that and never seem to get enough fill on end of the world potentials. Maybe it’s just the fear within us all that needs to be satisfied and resolved at times that make these film work. Fun stuff and then again maybe not that sci-fi as we think.