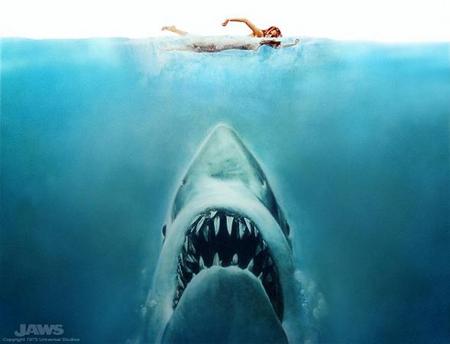 AICN scored the big “cool” story of the week when they scored the news that JAWS will be making its way to Blu-ray very soon.

Quint, one of the long time contributors to the site got an almost hour long sit down with Mr. Spielberg and the news shot forth that the process has begun and there will be a Blu-ray release to celebrate the 36 year anniversary of the original release. While Quint promises a Monday release for the entire interview he did post up the following snipit:

Quint: Is there a Jaws Blu-Ray in the works?

Steven Spielberg: Yes, there is. Yes, there is. I’ve already seen some of it. I don’t have a date yet, but there’s a Blu-Ray absolutely in the works.

Quint: I can’t wait, man. I love that the last DVD release actually had the original mono soundtrack on it as well. I wasn’t a fan of the remixed 5.1 soundâ€¦ the splashing sounded canned.

Steven Spielberg: Oh, I know. I totally understand that. (In the future) there’s going to be no more digital enhancements or digital additions to anything based on any film I direct. I’m not going to do any corrections digitally to even wires that show.

If 1941 comes on Blu-Ray I’m not going to go back and take the wires out because the Blu-Ray will bring the wires out that are guiding the airplane down Hollywood Blvd. At this point right now I think letting movies exist in the era, with all the flaws and all of the flourishes, is a wonderful way to mark time and mark history.

Add another one to the “must buy” list. Keep it here as soon as I have any release details I will pass them along and you might want to make a mental note to head over to AICN on Monday and check out that full interview with Spielberg, I think it will be a winner!