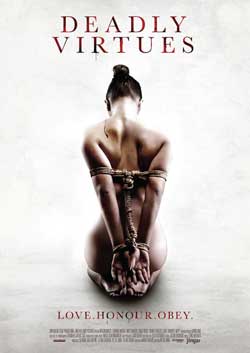 An intruder interrupts a couple making love in their bedroom, holds them hostage, and terrorizes them for the weekend. He tells the woman what his endgame is but, considering his behavior, it’s hard to believe. As the weekend winds down, no one could have predicted the final outcome.

Deadly Virtues: Love.Honour.Obey. is a home invasion movie unlike any other home invasion movie I’ve seen. Before I get any further into the review, I should warn you that this is a very disturbing film. And by disturbing, I don’t mean graphic gore and violence, though the film has its share. I mean “make your skin crawl, I don’t know if I can keep watching this” disturbing.

The film opens on a Friday evening as our intruder, Aaron, casually walks up to a two-story house and uses a key to enter. He slowly climbs the stairs as we hear the sounds of the home owners having sex in their bedroom. Note that I did not refer to what they were doing as making love. On his way up, Aaron pauses to pick up a woman’s high-heeled shoe and intently smells the aromas held within.

When he gets to the couple’s bedroom, after watching for a few seconds, Aaron announces his presence by asking, “Mind if I come in?” In short order, he knocks out the husband, Tom, and subdues the wife, Alison. In the next couple scenes, we see Tom bound and gagged in the bathtub and Alison tied up in the kitchen, suspended from the ceiling, balanced on one foot in an extreme body position. The bindings are intricately designed and executed and neither Alison nor Tom can move in any significant way. As Aaron explores the house, he finds Alison’s concealed vibrator, and slowly smells and tastes it.

I don’t think I’ve given any story points away – this all happens in the first 10 minutes, and I left a few things out – but I wanted to give you a sense of the atmosphere and emotion of this film. Far worse things are in store for Alison and Tom. And if you can guess what happens in the third act, my hats off to you. Knowing there was a twist, I spent most of the film trying to guess what was coming. I wasn’t even close.

The film is deftly directed by Ate de Jong, Drop Dead Fred (1991) and Highway to Hell (1991), and written by Mark Rogers, a first time screenwriter. All of the actors did an excellent job of creating the multi-faceted characters in Rogers’ script. 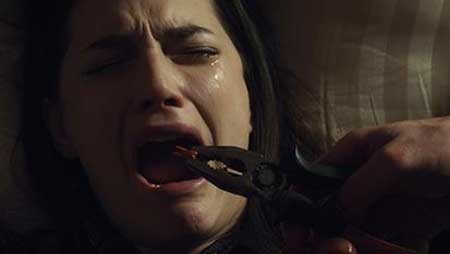 Throughout the weekend, Aaron masterfully manipulates and violates the couple in almost every way conceivable – emotionally, intellectually, and physically. Edward Akrout, whom you may recognize from The Borgias (2011-2012) or Dead in Tombstone (2013), is just as masterful in creating the character of Aaron. He is in one instant patient, understanding, soothing, and cloyingly affectionate. In the next instant, his intimacy elicits revulsion and he can be violent, bullying, derisive, and shaming. He is repulsive and yet at times, somehow sympathetic. Matt Barber, who appeared in Downton Abbey’s fifth season and the short-lived series Dracula (2013), is very believable as Tom, who is in turn disgusting, sympathetic, and pathetic.

Megan Maczko may have had the most difficult job as Alison. She is pampered by Aaron, but also humiliated and violated. And she is smart. She has to discover which behavior will give her the best chance of survival while at the same time looking for possible avenues for escape. Most of this mental calculation is silent and is conveyed through expressions and eye movement. You can see the wheels turning, but you’re never really sure if Aaron sees them or not. 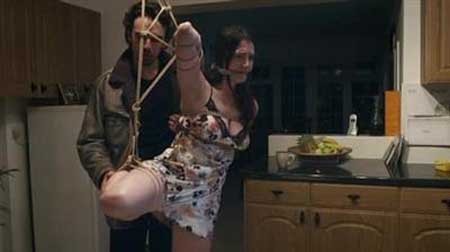 The complexities of the characters and the couple’s relationship are conveyed not only through the acting, but through the cinematography (Zoran Veljkovic) and the editing (Jason Rayment). While I’m at it, the original music by Fons Merkies also fits well in supplementing the story. All this from a micro budget, independent film. The film’s Indiegogo campaign raised over £13,000 for the budget.

You can probably tell that I liked Deadly Virtues: Love.Honour.Obey. a lot. But make no mistake. It’s not for everyone. Don’t say I didn’t warn you.