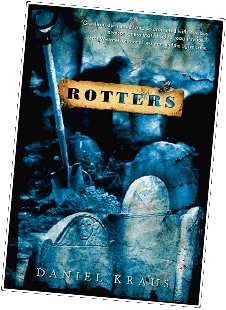 “My father spoke, and still I tried to listen, but my ears buzzed with the low hum of disease. He told me, and I tried to understand, that what we had done was something ancient and possibly noble, but also vilified and to be undertaken with the utmost solemnity; and that, most importantly, it was a craft passed down through generations, teacher to student, and as of tonight this group included not just my father, not just a clandestine group of men spread all across the country, but also, horrifyingly, me.

‘We’re called the Diggers,’ he said.”

Joey Crouch is your average teenage boy right up to the day his mother dies and he finds himself placed in the care of a father he has never known. A gruff, grubby, curt and rather smelly man who lives in a spare, shabby shack who is all but non-existent in the house. Jeered and despised by both students and one particularly cruel teacher at his new school, he feels like he’s fallen into one of the crueler circles of hell, and that’s before he finds out what his father really does for a living. Before long, he demands his own part in the family business and finds himself neck deep in the final resting places of the dead, a part of an ages old tradition that is steadily losing hold and thrust into a fight that may mean the end for all diggers.

I’ll be damned if Daniel Kraus doesn’t kick the door right off the hinges with his first line: “Today is the day my mother dies.” A line which leads into several pages of unfounded paranoia before tragedy strikes inauspiciously, like a punch in the nuts. The tale Krauss is telling here isn’t pretty or kind, but it’s powerful and moving. We all know by now that being a teenager is just about the worst thing that can happen, and he deals with the struggle for identity amid bad choices and personal horror with grace and blunt force. This is, after all, the tale of a boy growing into a man, reconciling the known and unknown of his family history as his ideals of reality are shattered by what reality is revealing itself to be. All while learning the trade of a grave digger.

Obviously, there is plenty of focus on the coming of age aspect of the tale, the drama of growing up and the burgeoning relationship between a boy and the father who wasn’t there, but fans of gore aren’t left in the cold either. Fancy a dip in sloppy casket liquor? How about digging through ripe old remains for a choice bit of gold? How about dripping gashed hand sewn by the light of a waning moon? The work is messy and Danny boy doesn’t cover that up at any point. There is also plenty of intrigue and adventure; dirty, grubby fights and floods and death and destruction amid blackmail and lies covered by more dirt than the bodies they unearth.

Further, as a complete metal geek, I dug the name dropping that popped up occasionally. Sure, everyone expects Black Sabbath and Motorhead, but mentioning bands like High on Fire and Nachtmystium showed that Daniel either really knows his metal or he is at least willing to research it well. He even throws in a hefty shout out to Chicago locals Vorvolakas. Most people won’t care, but I thought it was cool.

I don’t have much to bitch about here, but there were some times that the story dragged a bit, bogged down in a wavering focus between coming of age, the relationship between father and son, the collapse of past traditions or a decision of personal placement between warring factions. It certainly wasn’t a story killer, but could have used a bit of smoothing out.

I’m not going to bother trying to sell this as a YA book that adults can appreciate, as it’s well rounded enough to simply be fiction with a hook teens can grab onto. Its just good, heartfelt, dirty and gritty fun in an old school gothic wrapper.