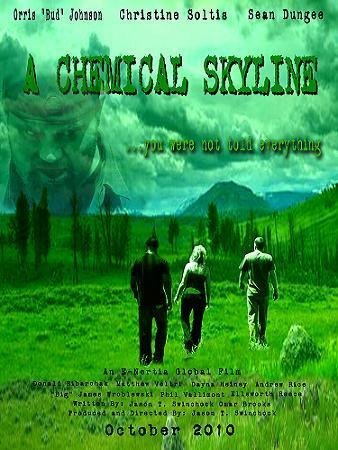 The title of the movie is “ A Chemical Skyline “ , what does that mean?

The title came from the mind of my co-writer and co-founder of E-Nertia Global, Omar S. Brooks. When Omar told me the title for the zombie movie that we were writing, i was blown away… that name is simply amazing. The “chemical sky” is what is respsonsible for the “birth” of our zombies. Even though the characters in the short film in-correctly believe it to be radiation; the green sky in the film is from chemicals in our atmosphere. We are delving more into this in the sequel, “Extinction Event,” which will be going into production next year.

What is the run time of the movie and how long did it take to shoot it?

How many zombies are in your movie?

I believe we had around 15 if i am counting correctly. I think the script called for 20, so we scheduled for 25 and got 15…. sh*t happens!

What is the formula on how to make a really scary zombie?

In my opinion, the eyes are what is the most scary thing. They stick with you and they need to be familiar yet alien to the victims/audience. We instructed our zombies to always have their eyes wide and always fixated on their target but only when they “see” a target. We were not going for over the top zombies because in our story, these all are still “freshly dead” and are not really rotting away yet. In the sequel and with a bigger budget hopefully we can get a little more creative with the make-up but we are still gonna stay true to our “zombie eyes” theory.

Did you film at any of the same locations from Night of the Living Dead?

It is funny that you mentioned this! I actually live about 5 minutes from where Tom Savini did the re-make of Night of the Living Dead. We were REALLY tempted to use the same cemetary for our John/Barb homage scene but ultimately I wanted to pay homage; not rip anyone off or try to do a re-make. And with the limited budget we had, we would have not done those original locations justice in my opinion. Sometimes you don’t mess with original art!

Do you have a personal favorite kill?

When the “Old Lady Zombie” takes out Nortrel… I was specifically writing an ironic death. The bad-ass karate guy, gets taken out by the old lady… perfect

What was the most difficult part of making this zombie movie?

Originally i thought the weather would be the most difficult thing to cooperate with us. Our script called for a beautiful sunny day because we needed the clear skies to edit in our “green sky.” I guess we were blessed because every day we shot, the weather was awesome. However, the most difficult thing had to be the editing and the sound editing; almost 4 straight months of editing.

Are there any interesting behind the scene stories that you can share with us?

I was actually supposed to make a cameo in the opening scene by being the gas-station zombie, but once we got into the swing of shooting, I had no time to do it so I asked my sound guy, Rob Rice, to do it. I think it turned out great and he loved having the mouthful of fake blood (thats a joke) Another thing is that even though I don’t make a cameo, my co-writer, Omar Brooks actually snuck into zombie make-up and snuck into a scene. I won’t say where he is at but if you watch and pay attention, you will see an extra zombie in a few camera angles…

Wrong is a strong word… lol.. I think if you have zombies in a film, you can’t go wrong! No, seriously, I think a good zombie movie needs to have a feeling of impending doom. Slow zombies are great for this, you know they are coming, you know you can run by them, you know you need to move now or there will be more of them. My question and something that a few films do right is, “where do you run to?” Where do you go? The new Walking Dead series/comic shows a great side of this. Also Dawn and Day of the Dead really show how people can go crazy being cooped up and kind of just waiting to die. I do also love the fortified Pittsburgh in Land of the Dead…

How can people see “ A Chemical Skyline “ ?

Everyone can go to our website, www.enertiaglobal.com, to order the DVD or the HD Blu-Ray (AVCHD) version. It is also on Amazon.com‘s video on demand service if you want to buy a digital copy of even just rent a digital copy.