Home | JAMES WAN to bring us a HOUSE OF HORROR

JAMES WAN to bring us a HOUSE OF HORROR 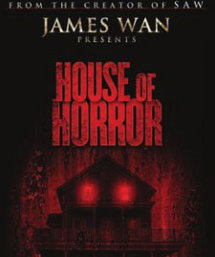 Remember back at the beginning of the year when I told you about director James Wan signing an 8 picture deal with Icon Entertainment? He signed on as a producer and he’s going to be offering up a series of JAMES WAN PRESENTS: films.

The first one is called HOUSE OF HORROR and I’ve got all the details for you:

The House of Horror is a horror-thriller that centers around a gruesome crime scene. The film is shot with a blend of found footage, interrogation video, news cameras and classical cinematography. The film focuses on the aftermath of a horrific massacre; five college students, brutally murdered inside a decrepit, abandoned home.

We are thrown right into the mix as the lead Detective, Mark Lewis, and the police department’s psychologist, Dr. Elizabeth Klein, question a suspect. The young man at the centre is John Ascot, bound by handcuffs in a mobile command station. During the interrogation, John explains everything leading up to the deaths of his friends.

We discover that they were amateur ghost-hunters, seeking out paranormal phenomenon at the abandoned house believed to be haunted. What started out as a harmless activity turned into something truly terrifying and more than they ever could bargain for. John explains to the police that he isn’t responsible for his friends’ deaths, but rather, it was the house. He tells them he believes the house is a gateway to hell; a place of concentrated evil.

We slowly witness an eerie change in John’s demeanour through the course of the movie. Things take a disturbing turn when John hints at the notion that he is possessed by the Devil. Detective Lewis and Dr. Klein are forced to unravel the mystery of how John’s friends were murdered. All this leads to a stunning revelation about the man they’ve been interrogating and a gut-wrenching conclusion.
Already looking forward to it. I have yet to witness a James Wan project I didn’t like. There will be more on this one soon so keep it here.