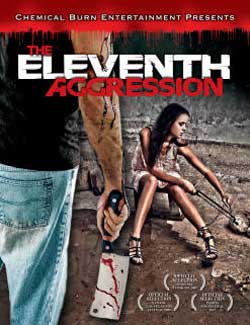 There are ten stages of aggression that a human being can be put through, and then there is the eleventh stage reserved only for the true sociopaths. Jeffrey Walters just so happens to be one of these cases, the former Vietnam vet has decided to start taking revenge into his own hands. It is up to two detectives named Karl and Trever to find and stop him before he kills again.

“This is what happens when you cheat, when you disrespect someone’s trust!”

Charles Peterson’s film The Eleventh Aggression is truly a one of a kind nasty indie crime thriller. In the first ten minutes of the film the viewer witnesses the main character Jeffrey Walters tying a young lady upside-down between two trees, it is only a matter of seconds later that the viewer learns what Jeffrey’s intentions are as he reaches for a bottle of drain cleaner. Jeffrey’s reasoning is that he needs to disinfect his cheating lover’s sexual organs. If that didn’t get your attention, I honestly don’t know what will and that’s what The Eleventh Aggression does, it grabs you by the throat and forces you to pay attention to it.

The Eleventh Aggression then shifts gears and introduces the next two characters that will fill out its story. Trever and Karl are both detectives who are investigating the murder of the woman that was seen at the beginning of the film. Karl played by Lanny Kethaber is the seasoned vet and the most level headed of the two, Trever played by Patrick Adam is the hip young detective. Karl is married to a seventh grade teacher and his job really does put some strain on their marriage especially with his late hours. Trever on the other hand is in an open relationship with a woman named Alice who is turned on by things that would cause others to grimace in disgust; she is also fond of calling Trever with various suicidal threats which come into play late in the film.

The Eleventh Aggression follows the three characters around in each of their personal lives. Jeffrey goes through life getting pissed off and then getting revenge on those who have insulted him. Jeffrey doesn’t just tie up women and perform draino abortions however he also skins people and pours salt in their wounds. Yes The Eleventh Aggression is really a treat for the gore hounds as hands are cut off, people are slashed to ribbons, eyeballs are gouged out; the main highlight however is when Jeffrey is cut off on the highway by two college students. When Jeffrey gets revenge he simply binds them each up in different rooms then proceeds to castrate the young man he then is shown forcing the mans penis into his lovers mouth choking her to death. All of these scenes of violence are captured with some really great fx for the budget.
Just because I mentioned all of that violence in that paragraph up there don’t believe that The Eleventh Aggression is all blood and guts and screams. Charles Peterson pays a lot of time with dealing with Trever and Karl’s relationships with each other and each of their personal lives. The case really takes its toll on Karl who eventually begins to have problems with his wife. One of the only things I honestly didn’t like about the film though is the over use of “shaky cam” during any scenes that are supposed to be dramatic.

Peterson also pays a lot of homage to some of his personal favorite films throughout from a scene in which Jeffrey melds out of the shadows just like the shape in the original Halloween to a scene in which Alice examines a noise in the dark carrying only a candle bra which will certainly bring many a viewer some feelings of nostalgia.
Once again however Peterson doesn’t just fill his film with violence and drama there are also a few scenes of humor thrown into the mix including a character receiving “road head” which leads to some pretty chuckle inducing dialogue.

The message behind the film however is that all human beings have levels of aggression before they truly snap, the eleventh level of course means that the person becomes a total sociopath and resorts to violence against all of those who have angered them. Eventually of course there is a twist ending that anyone who has seen the movie Se7en will see coming from the start of the sequence, except this isn’t Brad Pitt and Billy Zane.

For a low budget crime thriller The Eleventh Aggression does stand out as a violent and entertaining film, however those with weak stomachs might want to look away from this one since the scenes of violence can tend to be rather difficult to watch. I did however find the film way more entertaining than another low budget crime thriller franchise most of you may have heard of and it should definitely be checked out if you are a fan of the sub genre.