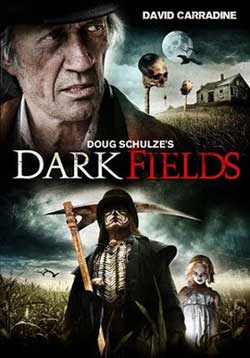 The town of Perseverance has been cursed for generations because of the transgressions of the White Man against a Native American shaman and his people. To keep the curse at bay each generation is required to do something unthinkable. Who will be strong enough to end the cycle of atrocity?

Dark Fields is a unique movie in many ways. The storyline is unconventional and is told in a very intriguing fashion: darting back and forth between three different perspectives and generations. This approach is a little confusing at first but once you surrender yourself to it, it’s really effective. At times I was reminded of David Lynch’s films. The cinematography and the uncomfortable way in which the stories unfold in Lynch’s movies are his trademark and Dark Fields director, Doug Schulze, has taken a page from that book and made it his own. Examples of the kind of imagery I’m talking about include things like a bathroom that resembles a hallway that has only a tub at the far end of it, a self-inflicted teeth filing scene, the use of primary colors in the dresses and parkas of three sisters (red, yellow, sky blue, and ONLY to represent those three), and the unnerving ability to creep me out with the use of a top hat. I still don’t understand the relevance of the top hat (other than it was the catalyst for the curse), I was just really impressed that such a mundane object was made to be such an integral part of the story. It had no right not being ridiculous and yet it wasn’t.

The actors in the movie were all excellent, veterans of the trade that really needed that experience to make the movie work. David Carradine (‘Kill Bill’ (2003), ‘Kung Fu’ (1972)) played Clive, the father trying to save his two children in the late 1800’s, in what was to be one of his last performances. Dee Wallace (‘E.T. the Extra-Terrestrial’ (1982), ‘Cujo’ (1983), ‘The Howling’ (1981), ‘Halloween’ (2007)) plays Jean, the mother trying to save her three ‘colorful’ daughters in the 1950’s, and Richard Lynch (‘Laid to Rest’ (2009), ‘Halloween’ (2007)) as the Karl, the father of four children…that he’s not necessarily trying to save. But my favorite performance was that of newcomer Sasha Higgins as Cari, Karl’s only daughter. At first I was put off by her performance. I thought she was speaking weirdly, with unnecessary cadences to her voice, but as the movie went on it made more sense that she would be a little off. Cari was remarkably lucky to be as sane as she was, given her whacked father and mother. Higgins was able to lend a kind of innocence to Cari that was similar to the way Sissy Spacek portrayed Carrie. (Wow…that was purely unintentional.)

Other aspects of the film I enjoyed included the make-up effects and the soundtrack. I almost got a little queasy in the fingernail scene. I did get queasy in the aforementioned teeth-filing scene. The make-up effects used to show the “disease” afflicting the townspeople was spot on, especially in its later stages. The soundtrack did what it was supposed to do: accentuate the action in the movie and it was never too overpowering or out of place.

After writing all this out I’ve suddenly come to a realization: I enjoyed this movie! I had no idea. It just kind of snuck up on me I suppose. I think it was able to do that because of my only criticism of the film. I thought that the pacing kind of dragged a little. Other than that, it has all the elements of a movie that I enjoy. It’s well thought out, it’s filmed well, its story is intriguing, and I enjoyed the performances. What else could you ask for?